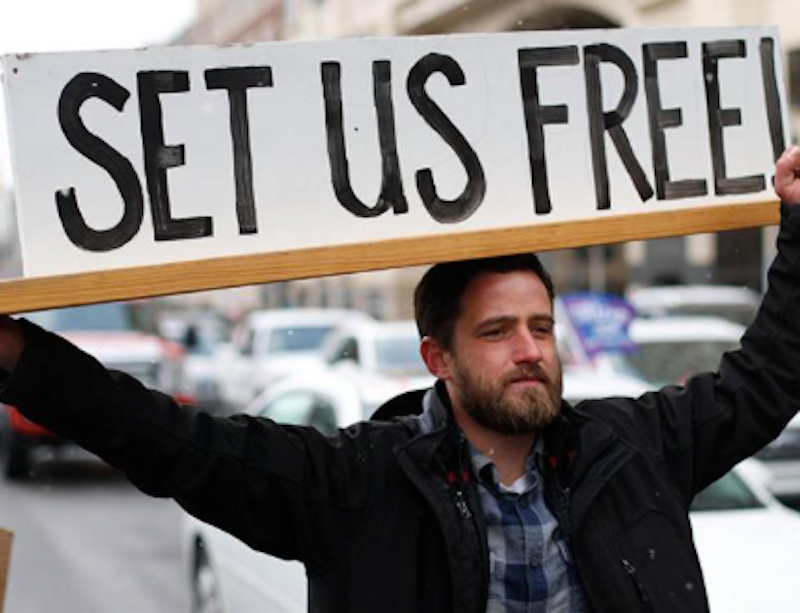 The pro-lockdown people tend to say they respect science more, but I suspect their position on the matter—whether right or wrong scientifically—would map better onto whether they were generally in the “control freak” crowd on other issues such as censorship and economic regulation.

The way the CV crisis is going, I’m not sure future generations are going to believe that before this, we usually took it for granted that big national crises tend to bring people together. Every tiny decision someone makes during this difficult time yields at least two feuding camps.

Trump’s reportedly taking chloroquine to fight off potential CV effects. Suddenly the media that normally fantasize about the man drinking bleach are ostensibly worried for his health. Some places have banned chloroquine for medical purposes other than malaria-fighting, seemingly motivated in part by the fear that the President will inspire millions to consume the chemical—though it appears the Arizona couple who injured themselves were falsely blaming the President for what may have been a murder attempt on the female drinker’s part. Reportedly a Democratic donor, it’s unlikely she was swayed by Trump’s health habits, has a history of mental illness, and had apparently been considering divorcing her husband as long ago as 2012.

Murder’s bad by any method and involuntary by definition—but as long as an action is voluntary and informed, I say let people consume whatever they like and take whatever risks they like, so long as they do not impose risks (including particularly deadly germs, after a point) on unwilling others.

By contrast, Libby Watson, a staff writer at what remains of New Republic and part of a rising generation of little totalitarians, writes of the U.S. having a “deranged civic religion” in which the Constitution protects the myriad components of a free life, which she says means “essential workers’” lives apparently don’t even enter into the equation here: “There is no constitutional right to go to Arby’s. But from the start, lockdown protesters claimed their constitutional rights were being trampled by the stay-at-home orders.”

She works in praise of AOC for opposing beef consumption, too. Watson, I’m sure, has a very short list of things we’re allowed to do, and she’s not getting it from the Constitution. She’s getting it from the few dry crumbs of mercy in her own dark heart.

But then, this crisis has made it plainer than any previous one that neither the Constitution, our hearts, nor science is the de facto arbiter of truth anymore. It’s Google. Scientist Knut Wittkowski being censored (Canceled? Deleted? Edited? I’m not sure we have the proper private-sector word for it quite yet) by YouTube is more evidence of that. If they can declare a Rockefeller University epidemiologist “misinformation” in need of censoring, what makes you think any deviation in opinion will be tolerated in the future, once they get around to thinking up the rationales for declaring the unfashionable position on every issue dangerous? Disagreement will soon be treated as crime.

Fortunately, I predict this will spark in reaction a radical epistemological rebellion in which every crackpot is at least briefly idolized and listened to—and despite years of trying to make people see reason, I give all of the crackpots my blessing in advance, given how evil and cowardly the gatekeepers of official wisdom have become.

Law prof Richard Epstein was raked over the coals recently mainly for guessing (rationally enough) that the plague will peak and then taper off, like so many others. Maybe not. We’ll see. He’ll revise as needed and clean up his math, no doubt. But a man’s still allowed to guess.

It seems the creative types who usually do more to shape public opinion than do right-leaning law professors have mostly been firmly, often PSA-participatingly pro-lockdown. But comics writer Neil Gaiman got a stern visit from Scottish police for flying home to the UK after singer Amanda Palmer publicly dumped him. He violated quarantine rules—but also bravely defied border restrictions. Think fast, ideologue: Whose side are you on? Are you sure?

Maybe political valences will end up permanently rejiggered by this crisis. It appears that rural, conservative Americans are the ones most likely to reject lockdown rules, though lefty New York is now blamed for about two-thirds of the U.S. spread of CV (and for so much more). Even within New York City, it’s getting hard to tell whether a libertarian/anarchic temperament inclines one to the political left or right. Communist mayor Bill de Blasio now threatens to shutter bars and yeshivas, which at least some New Yorkers, even in Brooklyn, must notice sounds more authoritarian than, say, Republican mayor Giuliani was.

But then, it’s hard even for a libertarian like me to blame De Blasio when he’s saddled trying to protect a city full of confusing people like gay right-winger Lucian Wintrich, who reminds us there’s an oddly thin line in recent years between traditionalist Christian and Satanist. With deliberately nihilistic-sounding abandon and maybe just a hint of child sacrifice in the invite flyers—which depicted a pale, spotty, young boy against a corona virus/sun’s corona-like black background—Wintrich threw a party a couple months ago at which people were encouraged to share food and give each other CV. He’s like the Milo for a new generation except for the fact that Milo was only about three years ago.

Libertarians and leftists alike would hate to think that Rod Dreher, writing in American Conservative this month, is correct that today, as in Weimar, queer transgression in pursuit of the authentic self leads logically to fascism. I think the fairer, more pessimistic pattern is that everything leads to fascism. Certainly public health policies easily do. Imagine if society’s response to AIDS had been as authoritarian, swift, and moralizing as its reaction to CV has been. Are you sure you’d prefer that world, pro-shutdown liberals?

Meanwhile, failed presidential candidate Bernie Sanders hopes CV will change “fundamental tenets” of America. Remember when ludicrous left-wing propagandist Naomi Klein said it’s free-marketeers who tend to cynically exploit crises? The left is evil, it loves power, and it lies, so it will always be lying in wait to pounce.

Even middle-of-the-road Biden’s campaign ads sound cynically pseudo-anti-immigration and anti-China (in order to exploit Trump’s presumed failure to protect us from the Wuhan contagion). Dems will of course forgive Biden for this off-key China-bashing—and he just might dupe some xenophobic swing voters into drifting mindlessly out of Trump’s coalition.

Look forward to progressive Kamala Harris unashamedly denouncing the current wave of anti-government protestors as “criminals” if she gets on the ticket, too. Progressives have long loved “the moral equivalent of war” and the regimentation of society that goes with it, despite their fleeting moments now and then of sounding like tolerant bohemians. Whatever tone, and whatever handy “moral equivalent,” gets them elected and keeps them in power.

CNN did a Coronavirus: Facts and Fears “global town hall” on the 14th with Greta Thunberg as one of their four panelists. A breathtaking inversion of language and meaning followed on Twitter as ‪Anderson‬ ‪Cooper‬ defended CNN’s use of the ranting teen by saying of those criticizing CNN and her: “It’s like a tween on TikTok. You’ve got to produce content lest you miss out on a cycle of phony outrage.”

If it’s an expert on “facts and fears” you want, Cooper, I should pull rank as the old HealthFactsAndFears blog editor, restating the basic recurring point from that site, that decisions have tradeoffs and are rarely all-good or all-bad, especially in an area like health policy. You definitely can’t treat health as if it’s completely divorced from the state of the economy, either, despite so many recent nonsense posts online asking how many people you’d kill “for the economy”—as if economic activity doesn’t keep us all alive.

In a world where we barely know the relevant background death rate or the reliability of CV testing, we must accept uncertainty and admit neither we nor our ideological foes know when it’s safe to go out and about, and admit none of us will survive forever if we don’t.