The Massachusetts governor is inept and flying blind, just like every other leader in America now. 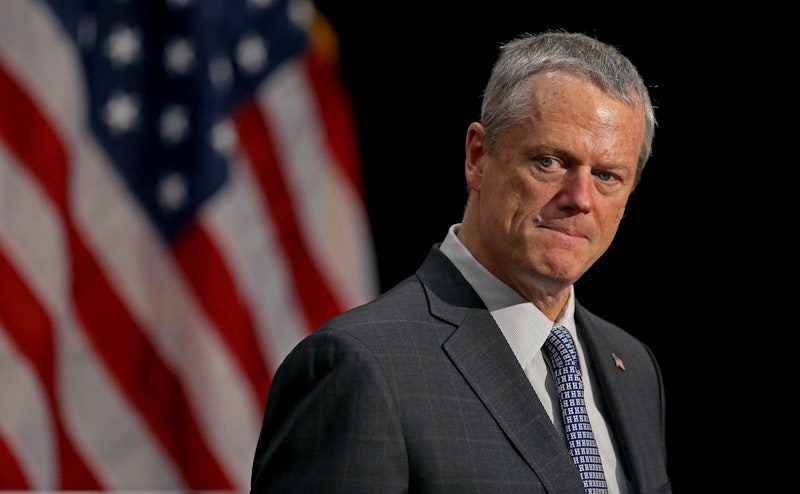 Wear a mask or pay the fine. Those are your options in many U.S. locales as a result of the coronavirus pandemic. In Massachusetts, everyone has to wear a mask in public—or else. It’s ironic because the government told people to not wear masks early in the pandemic. They lied and said masks won’t help normal people, but they’ll help nurses. The fact that it took Massachusetts Gov. Charlie Baker until May to come up with the order shows he’s inept. Either he was stupid enough to believe that lie or he’s a liar.

At some point, there will be a vaccine for this virus. When it comes out, what will the laws be surrounding it? Will it be mandatory? Will “my body, my choice,” the popular pro-abortion slogan, apply here?

“My body, my choice” apparently doesn’t apply to masks—because Baker, who’s pro-abortion, Vice, and Rewire, among others, said so. That’s because people not wearing masks could harm others. As a pro-lifer, my head explodes reading that. It’s like they understand the logic when it’s applied to something else, but not a developing baby. Or, they just don’t care.

The bigger question: does anyone believe the slogan “my body, my choice”? Do they believe human beings should have complete bodily autonomy? Some libertarians, minarchists, and anarchists do, but the overwhelming majority of people probably don’t. It’s not just a matter of masks, gloves, and dismembering babies. Politicians have been hypocritical on this for years.

In 2019, they showed it. Gov. Baker, a liberal Republican, temporarily banned vaping. Congress passed an awful budget bill with bipartisan support that, in part, raised the tobacco use age to 21. It mirrors the alcohol consumption age which few politicians ever discuss lowering. And two years ago, Sens. Elizabeth Warren and Ed Markey, both Massachusetts Democrats, made a push for the FDA to ban menthol cigarettes (Splice Today’s Russ Smith made a great case against it in 2018).

The government doesn’t allow 18-to 20-year-olds, who are legally adults, to use tobacco or alcohol. A 2019 Gallup poll found 73 percent of adults favored raising the smoking age to 21 as well, but who are they to tell these young adults what they can do with their bodies? There’re plenty of other places where the bodily autonomy argument could apply as well. Who’s advocating for legalized heroin? Probably not a lot of people because we know it’s bad. And wanting to decriminalize simple possession and treating addiction as a disease is not the same as legalizing it.

How about public nudity or other lewd acts? That would make many feel uncomfortable. I’d say towns should fine people for exposing too much of flesh at the beach. It’s a public place. Make the beach family-friendly. Prostitution is only legal in Nevada, yet the most we see among progressive politicians is calling to decriminalize it. My fellow Bay Staters thankfully voted down the physician-assisted suicide ballot question in 2012. That’s one less decision people can make with their bodies.

And maybe the two easiest ones to illustrate the hypocrisy are seatbelt and motorcycle helmet laws. If you’re not wearing a seatbelt and crash, that impacts you—not others. Illinois and Iowa are the only two states that allow motorcyclists to not wear helmets, and New Hampshire is the only state without a seatbelt law for adults.

Protecting body integrity would also mean creating more laws. Parents have no issue circumcising their children or getting their baby’s ears pierced. Those two would have to go. Perhaps we’d also need a constitutional amendment outlawing selective service (a great idea).

Sloganeering isn’t the way to have intelligent conversations on important issues. “My body, my choice” is one example of a bad one.