If only CNBC's debate moderators had stood firm. 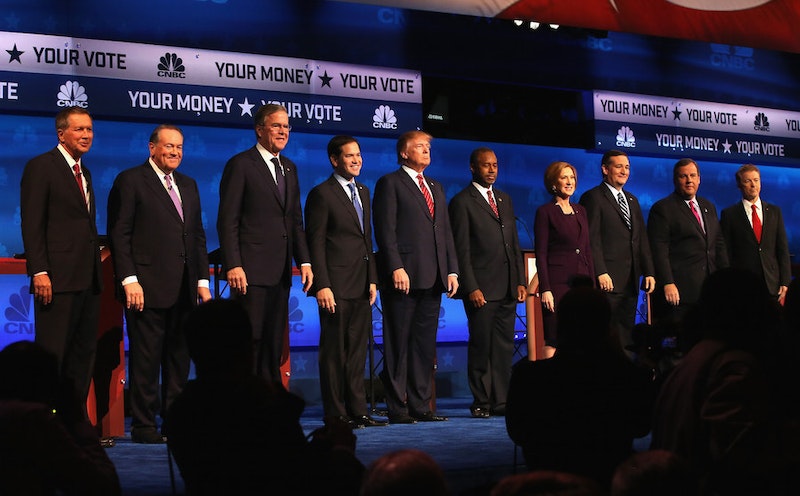 A dozen GOP presidential candidates sent representatives to a sit-down Sunday night outside Washington. One clue to their plans is a draft letter leaked to The Washington Post. Mainly it's a list of questions intended for whoever wants to put on a debate featuring the contenders for the GOP presidential nomination. The questions focus on nuts and bolts—podiums or no podiums—but the Republican National Committee thought it had settled all these details, not to mention the details of who would host the debates and when the debates would take place. Not anymore. The candidates are preparing to take over.

The candidates won't make any trouble about next week's debate. That's because it's hosted by Fox Business Network and “people are afraid to make Roger mad,” as a summit attendee told the Post. The person meant Roger Ailes, chairman of Fox News. Everybody else had better watch out.  The Post says the draft letter is just a springboard and that the campaigns expect to see “a new list of demands, incorporating their ideas, in the next few days.”

Along with the questions about logistics, the draft letter lists eight things that debate hosts have to promise they won't do. No photographing the candidates from behind because that would show their notes. No playing up of candidates' bathroom breaks (this item is listed as “Show an empty podium after a break, describe how far the bathrooms are”). No reaction shots of the moderators or audience members. No political gear for audience members. No live microphones during breaks. Asking mean or combative questions isn't on the list, despite the pain voiced by Republicans after last week's CNBC debate. But the list does include gimmick questions of a kind candidates hate: no yes or no questions, no questions that have to be answered by raising the hand or not raising the hand, no questions asked by one candidate of another. No “props or pledges by the candidates” either.

No doubt upcoming drafts will say plenty about mean questions. Republicans, and especially their candidates, are seething mad about the debate system. They're convinced that CNBC was unfair and that this alleged unfairness was the last straw. Reince Priebus, chairman of the RNC, tweeted about CNBC's “improper and unprofessional” questions. Ted Cruz announced that Sean Hannity, Mark Levin and Rush Limbaugh ought to moderate. I wouldn't trust any politician to pick a moderator. But the Republican contenders are especially dire, and their complaints about the CNBC questions are a lot of noise.

Big mistake. Yes, CNBC screwed up. My guess is the moderators read their questions without having seen the research. For example, Becky Quick should’ve looked at a packet or file that told her where Trump's crack about Marco Rubio came from. Instead, I suppose, they gave her the question on a card or a little screen and left it at that. Result: Trump could deny saying it and leave her with no comeback. Voice trailing off, she said, “Where did I read this and come up with this that you were…” A good deal later she could say, “I found where I read that before. It was from the donaldjtrump.com website.” (Maybe her producers got word to her.) Too late, the impression had been made.

Carson also got away with acting like an accurate question was false. The moderator wanted to know about Carson's “involvement” and “relationship” with Mannatech, a maker of nutritional supplements that advertised cures for cancer and autism. “Well, that’s easy to answer,” Carson said. “I didn’t have an involvement with them. That is total propaganda, and this is what happens in our society. Total propaganda. I did a couple of speeches for them, I do speeches for other people. They were paid speeches. It is absolutely absurd to say that I had any kind of a relationship with them.”

But Carson's business manager says Carson had a contract with Mannatech. That sounds like a relationship. Nor did Carson just give speeches. He sat for interviews in which he praised the company, and the company ran the clips on its site. He was helping Mannatech pitch itself to consumers, and this was after the company had paid millions to settle false advertising charges over its cancer and autism claims. The moderator had it right.

The same when Marco Rubio answered a question about why his tax plan helped the rich more than the middle class. Rubio said the moderator was full of it because his plan helped the poor more than the rich. But the poor and the middle class aren't the same thing. Then Trump said CNBC had wanted the debate to be “three hours, three and a half,” and he had stopped them. A moderator said, no, the debate was never going to be more than two hours. Trump blared his anger. “That’s not right,” he said, his voice getting thick. “That is absolutely not right. You know that. That is not right.” But reports agree that CNBC's memo about the debate format specified a running time of two hours for debating, plus time for commercials. Nobody ever talked about three hours. The rest of the argument is whether two hours of debating counts as a two-hour debate. I don't think that's what Trump was yelling about. He had made up a story in his head about the three hours.

Now the GOP candidates may declare independence from the media because they're so sure they have a grievance. The breach had to come sometime, I guess. After all, the animating principle of today's conservative movement is that there's always some jag-off someplace who's making sure you don't get what you want. But CNBC had to be the trigger. The moderators backed down when they shouldn't have.