An Interview With Maryland’s Frank DeFilippo

The journalist/political insider has always made his own luck. 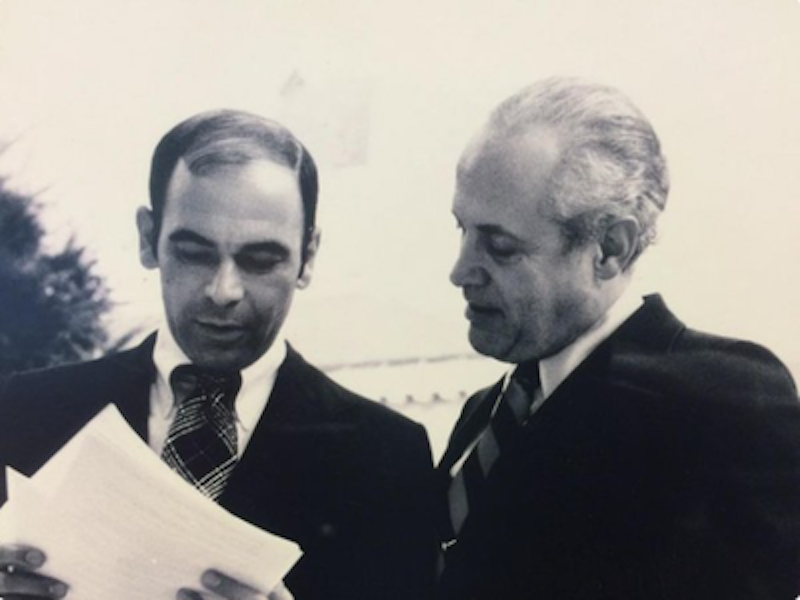 The 300 stories Frank DeFilippo’s written for Splice Today are a mere fraction compared to the entirety of his career as a leading journalist in Maryland. He’s covered every media outlet there is—from television to newspapers, radio and magazines to his current column here on the web. When you meet the 85-year old, you’d swear Frank was a guy in his 60s. It was my pleasure last week to meet him.

Born in 1930 in Long Branch, New Jersey, Frank missed fighting in the Korean War by participating in another way—as a musician.

“I didn’t want to shoot people,” he said. “So I enlisted in the Navy school of music and played in their band for four years in the French Riviera. Missed the draft by one day.”

He finished Mount St. Mary’s with Degrees in Literature and Philosophy and ended up with a job at The Catholic Review as an editor, eventually moving on to a job at The Baltimore News-American, which competed with The Baltimore Sun. Though working at the copy desk writing headlines and the picture desk writing captions, DeFilippo wanted to cover politics. It was 1962, John F. Kennedy was President, and as luck would have it, two political reporters had recently been fired from the paper.

“I want the political writer job or I’m leaving,” said Frank, telling an editor he had another job waiting, which was more or less the truth. “You make your own luck.”

He got the job at a pivotal time in politics, ending up covering what became the Hearst-owned Washington bureau and the White House for eight years—Spiro T. Agnew’s campaign on the road, Air Force One under LBJ, national political conventions and endless political campaigns.

DeFilippo became the press secretary to Maryland Governor Marvin Mandel in 1968, a job he stayed in for eight years.

“I took the job to see the other side of what I was writing about,” he said. “Was I getting the whole story? An accurate story? I learned that no reporter will ever be able to get the whole story. Besides, it wasn’t nearly as nefarious as I thought. All we did was sit around and talk about the budget all day.”

Asked what the takeaway from that time in the State House was, DeFilippo answered with a characteristic grin, “Yeah, never stay in a job for more than two years. Nothing good happens after two years. All the good faith unravels, for anyone. People get carried away by power. I got my degree from Mount Saint Mary’s, but I got my education in the State House. When I look back to the 1970s, government hadn’t yet become what it is today. The rules changed because of two things: Watergate and the 80s Reagan-era deregulation of lobbying, and so the government’s relationship with the press changed.”

After the Mandel administration, DeFilippo had columns for the News-American, the Evening Sun, and City Paper. He wrote for Baltimore magazine, Regardie’s, Annapolitan and the Baltimore Business Journal.

“Some of the best writing I’ve ever done was for Russ Smith [Splice Today’s publisher] at the City Paper,” he said, “because when you write for an alternative weekly you really have the freedom to let it go and do what you want. You don’t get that anywhere else.”

He was a political reporter for Channel 2 WMAR, was a panelist on WJZ TV’s “Square Off” for 20 years, had a radio talk show on WCBM, and was well known for his 22-year stint on the WBAL Ron Smith radio talk show. Show guests often included governors Bob Ehrlich or William Donald Schaefer, but never Martin O’Malley, who DeFilippo says called the show “hate radio.”

“Ron was great,” he says of his one-time on-air conservative adversary, the now-deceased Smith. “He played it straight. No matter how angry the caller was, he was always very hospitable. And even though we’d argue on the air, off the air we really just talked about books or movies or music. None of that conservative-liberal nonsense.”

He’s returned to the freedom of writing what he wants in the medium of the Internet with his weekly political column at Splice Today.

“I guess the difference is that with a newspaper you know who’s reading you where on the web a guy can be in Texas or anywhere. But I enjoy the web. You can write for more than 750 words and weave in the background,” he says. “You look at these guys at the Baltimore Sun. They’re young people, and damn good reporters, but they don’t know the background. There just isn’t the having been there and the having done that.”

—Weekly Splice Today political columnist Frank DeFilippo is preparing to publish a book: Shiksa: The Rise and Fall of Marvin Mandel about the Maryland governor under whose administration he served as press secretary.