Clinton and the Death Penalty

It's not going to help her. 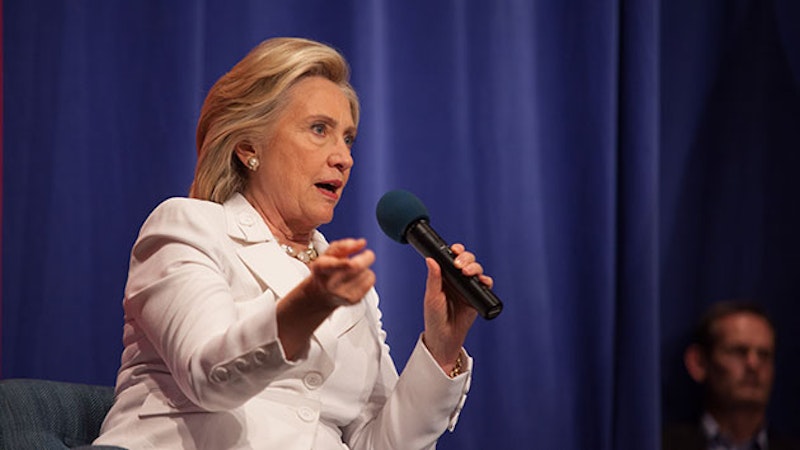 Hillary Clinton supports the death penalty. Clinton explained her position by arguing, "There are certain egregious cases that still deserve the consideration of the death penalty." But surely the philosophical discussion has to be secondary to the political one. Clinton's running for president; her opinions are based on what will get her votes. So what's the calculus here?

Back when Bill Clinton was running for president in the 1990s, the death penalty was part of his strategy of triangulation—positioning himself as a moderate by embracing as many conservative positions as he could. Clinton scurried back to Arkansas during the 1992 campaign to oversee the execution of Ricky Ray Rector, a brain-damaged inmate, as a way of demonstrating his tough-on-crime bona fides.

There's no doubt that Clinton thought his death penalty position would help him in the election. But did it? That's less clear. The conventional wisdom is that George HW Bush crushed Michael Dukakis by painting him as soft on crime (as in the infamous Willie Horton ad). But the truth is that Bush was riding a strong economy and Ronald Reagan's high approval ratings; the fundamentals in 1988 suggested any Democratic candidate was going to lose. The 1992 election was considerably closer, and Clinton's tack to the center may have helped him consolidate support, though again probably the lackluster economy and Bush's lack of popularity were more important.

Even if championing crime issues helped Bill in 1992, though, that was more than two decades ago. Crime rates have been dropping since the 1990s. The prison population meanwhile has been rising that whole time, and has reached such bloated proportions that even the Koch brothers have come out in favor of decarceration. Black Lives Matter has also raised awareness of the injustices of American law enforcement.

Bill Clinton was pandering to both Democrats and Republicans when he made his dramatic stand for the death penalty, and he was doing so at a time when fear of crime might arguably have motivated some significant number of voters. Hillary Clinton's base, today, though, is solidly against the death penalty—which means that most death penalty supporters are probably planning to vote against her anyway. And in a time of low crime rates, and widespread, bipartisan skepticism about the value of more imprisonment, it’s unlikely that most people are going to be voting on the death penalty anyway. In 2014, crime wasn't among the most important election issues for anyone: not Democrats, not Republicans.

So, why embrace the death penalty? Maybe Clinton is afraid to be too closely associated with Black Lives Matter, and thinks the death penalty gives her some distance. Or maybe it's all about Ricky Ray Rector. The Clintons have recently tied themselves in knots pretending that DOMA was some sort of stealth effort to promote gay rights. Once you've publicly supported something, it can be hard to back off and admit you were wrong. Perhaps Hillary Clinton is worried that if she condemns the death penalty, she'll get questions asking her if she thinks Bill Clinton is a murderer.

Or maybe she just has some sort of fundamental belief in the righteousness of the death penalty—even though she admits, that, "We have a lot of evidence now that the death penalty has been too frequently applied, and too often in a discriminatory way." Whatever her reasoning, she's bucking the majority of the Democratic Party on an issue which is very unlikely to get her votes in the general election. She seems stuck in the 1990s. Which is presumably what Bernie Sanders will tell her when he grills her on this issue in the next debate.