GOP’s Transparent War Against the Media

Ted Cruz is reminiscent of Spiro Agnew and George Wallace. 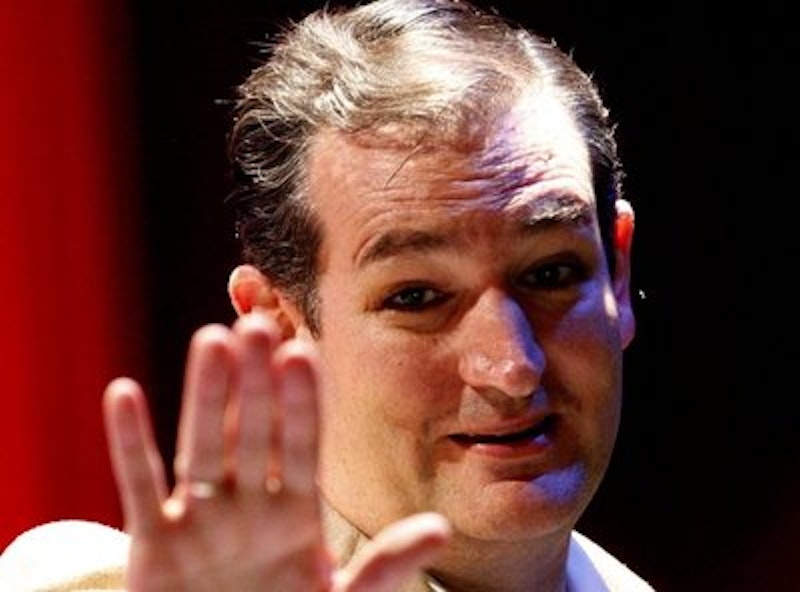 Pissing off people is part of journalism’s job description. Journalists ask impertinent questions to get pertinent answers. Expecting to catch grief for it, especially from political candidates, is also part of the franchise, commonly known as “killing the messenger.” Nobody in this day and age does it better than Republicans. It’s Chapter One in their playbook.

Pretending to be wounded or insulted by a question is another matter, usually an attempt to deflect a poison-tipped query or to redirect the debate altogether. It’s an age-old dilemma for reporters and panelists—to do their job and elicit relevant information or toss softball questions and allow the subject to meander in flatulent self-promotion.

Among the lessons taught and learned about appearing on television is this: ignore the question and say what you want to say. Two minutes later nobody will remember what you said but only how you looked and sounded. But that artful dodge no longer works. Constant replay and analysis will betray the trick.

Media critics have another take. They’ve criticized the moderators for allowing the last GOP debate to wander out of control, for not adequately researching their questions, for allowing debate participants —all 10 of them—to shout at each other and for shouting questions to try and restore order. But, in fairness, the Republican candidates’ performance was so uniformly hostile to the media that it seemed a pre-set strategy.

So hear this, right up front, from Republican National Committee Chairman Reince Priebus, who Tweeted after last week’s debate: “CNBC should be ashamed of how this debate was handled.”

Later, Priebus, struggling to regain control of the debates and his party, suspended the RNC’s contract with NBC, parent of CNBC, to broadcast future debates. Priebus’ action followed a decision by candidates or their proxies to meet and discuss new rules for the remaining debates. The next debate is scheduled for Nov. 16 on Fox News, a more hospitable venue for Republicans.

And read this from Carl Quintanilla, one of the debate’s moderators, who tweeted: “I’ll say this much. Everyone should moderate a debate once. It’s like yelling at the TV from home, except they talk back.”

So what’s all the fuss about? Republicans, the debate participants and the audience in the hall as well, believe they were shafted by the CNBC moderators and the business network’s debate rules. They believe Democrats received more favorable treatment during their first debate two weeks ago, without acknowledging that it was on a different network (CNN), with different rules, a different time frame and half the number of candidates. Summing up, Republicans accused CNBC of bias. No surprise there.

Listen to Sen. Ted Cruz (R-TX), a debate participant, in GOP playbook mode, mock and bait the debate moderators when he was asked a question about the debt ceiling: “The questions that have been asked so far in this debate illustrate why the American people don’t trust the media. This is not a cage match. You look at the questions: ‘Donald Trump, are you a comic book villain?’ ‘Ben Carson, can you do math?’ ‘John Kasich, will you insult two people over here?’ ‘Marco Rubio, why don’t you resign?’ ‘Jeb Bush, why have your numbers fallen?’” Cruz, of course, was talking over the heads of the questioners and directly to his evangelical supporters.

The audience sucked it up, giving Cruz a thunderclap of applause. After the debate, Bush campaign manager Danny Diaz reportedly got into a nasty face-off with a CNBC producer: “I expressed my displeasure about the way the debate was managed and the amount of time.” Bush got to make his case during the two-hour show-and-tell event at the University of Colorado Boulder Campus.

As if to underline the point that attacking the media is an established technique for riling up the Republican base, the day after the debate Donald Trump described the press as “scum.”  “You have no idea how bad they really are,” he told a rally in Nevada, “no idea.”

Killing the messenger is as old as Greek literature, dating back to Plutarch’s Lives wherein a king has a messenger beheaded for delivering bad news and to Sophocles who wrote “No one loves the messenger who brings bad news.” Similar lines appear twice in the writing of Shakespeare, in Henry IV and Anthony and Cleopatra.

Sigmund Freud characterizes killing the messenger as a “tactical move,” to fend off “what is distasteful and unbearable.” More recently, a movie titled Kill the Messenger centered on the life of Pulitzer Prize-winning reporter Gary Webb who was found dead in 2004 with two gunshot wounds to his head. Webb had written a controversial, and in some cases discredited, series of articles linking the CIA to the flow of cocaine into the U.S. from Nicaragua. Police ruled Webb’s death a suicide.

Republicans view the mainstream media as their enemy all the while they embrace, and are embraced by, right-wing talk radio and the connective tissue of conservative writers, publications and publishing houses. The current standoff between the two media camps resembles the formative days of the nation when different political parties sponsored their own press outlets.

The most famous modern practitioner of the “kill the messenger” approach to the media was, of course, Richard Nixon. Nixon berated the press when he lost the governorship of California in 1962: “You won’t have Richard Nixon to kick around anymore.” And he helped to besmirch his presidency by compiling an enemies list that included many reporters. Nixon also perfected the debating skill of deflection with his frequent response to questions: “That’s a great question. But before I answer that let me say this.”

But two politicians with Maryland connections who used the media as a foil with great success were Spiro T. Agnew and George C. Wallace. Agnew was a man who loved words. As governor of Maryland, he made it a priority to learn a new word every day and use it repeatedly until it was locked firmly in his memory circuits.

Agnew, later as vice president, met his match in a marriage that was made in Webster’s Dictionary. The Nixon White House assigned wordsmiths Pat Buchanan and William Safire as Agnew’s speechwriters and together they bombarded the press with phrases such as “nattering nabobs of negativism,” “troglodytes,” “effete intellectuals,” “hopeless hysterical hypochondriacs of history” and “effete snobs.”

But Agnew did not begin his lashing out at the press as governor and vice president, as many believe. It all started even before he was elected executive of Baltimore County in 1962 when he berated a reporter over as story he didn’t like. He cursed the reporter for writing that he had promised a job in exchange for an endorsement. Two weeks after denying the promise he made the appointment.

Wallace, the segregationist governor of Alabama, who campaigned for president in Maryland in 1964 and again in 1972, had a love-hate relationship with the press but he used them very effectively to his advantage. Wallace lumped reporters with the “pointy-headed intellectuals” he railed against. Wallace’s specialty on the campaign trail was whipping his audiences into a frenzy of hatred until they were ready to attack the reporters covering Wallace. At the peak of their emotional pitch he would calm them down. Once, during a rally in Cambridge, Maryland, Wallace had his audience ready to turn on the press until State Sen. Frederick Malkus, an Eastern Shore icon, stood and said, “They’re okay. They’re friends of mine from Annapolis.”

The current Republican rage against the media comes with the territory. And “the power of the press” is no empty phrase. Last week’s debate nearly degenerated into a free-for-all and the moderators might have benefited by allowing the inmates to control the asylum. Instead, they are being slammed for trying to bring order to the debate and forcing the candidates to answer questions they posed instead of questions that the candidates were posing to themselves.

But to the audience in the hall and the Republican viewers at home as well as the radio talk-show hosts and listeners, the GOP candidates have found their primary election opponent: It is not each other. It is the mainstream media.