The Baby Boomers Suck, But What About You?

Be the apple that falls miles from the tree. 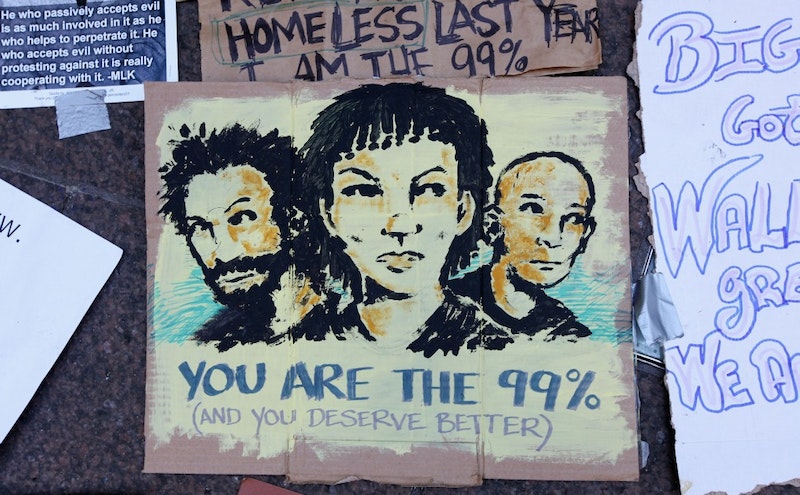 Sometimes, when I’m feeling spiteful towards my parents’ generation, I re-read Jim Tankersley’s 2010 Atlantic article on the Baby Boomers, which meticulously details the ways they destroyed the world for their children both economically and physically. Baby Boomers, sometimes called “the most hated generation,” or as Tankersley dubs them, “parasites,” have presided over some of the greatest and most enduring systematic failures in recent history. (The excessive guzzling of fossil fuels at the expense of the environment, the squandering of economic surpluses, the destruction of social programs, and a runaway national debt). It’s a generation that, in the quest to provide for their own specific children, ended up screwing children in general. Of course, after I read this article and time passes, there is one detail that I selectively forget: there’s little evidence that my generation, the Millennials, is any better.

The 2010 PEW report on my generation (people born between 1982 and 1999) had some promising indicators could make up for the Boomers. We’re more tolerant in terms of race and sexual orientation and more accepting of expanded roles for women and immigrants than our predecessors. We’re more socially liberal. Nearly six in 10 Millennials said they had volunteered in the last 12 months. Raised on the Internet, we have the know-how to harness its powers to make substantial social changes and there are many examples of people in my age group who are doing just that.

Though the media reports that our economic futures are doomed, I’d argue that in the end this might make some of us more resilient. Nassim Taleb, in his book Antifragile writes: “Just as human bones get stronger when subjected to stress and tension, and rumors or riots intensify when someone tries to repress them, many things benefit from stress, disorder, volatility, and turmoil.” I’ve seen many peers respond to rising trends in joblessness resourcefully and entrepreneurially, creating opportunities for themselves by creating their own businesses, pursuing alternative kinds of training that weren’t offered in school, and finding unusual opportunities that wouldn’t have occurred to our predecessors—such as a friend who is currently training himself in international development by running a chicken farm in Ethiopia. Our circumstances have forced us to be scrappy and to live with less. Perhaps we could be the generation that breaks the environmentally damning trend of living in what environmentalist Bill McKibben calls “starter-mansions for entry-level monarchs.”

But my fear is that, though the circumstances are different, the apple hasn’t fallen far from the tree, that we’re just aspiring entry-level monarchs without means. Most damning, PEW found that we report prioritizing helping others similarly to other generations. Though we have a populist rallying-cry, “We are the 99%,” it emphasizes victimization rather than a call to leave this place better than we found it, which, as stated above, is a pretty low bar. Though we are less likely to drive cars, as a recent New York Times article reported, I suspect it may be less of an environmental statement and more the result of not being able to afford car payments. We’re just as likely as previous generations to alter our behavior in favor of the environment by recycling, composting, and choosing environmentally conscious products. It turns out that we volunteer as much as our parents, but we vote less, so our tolerant philosophies aren’t being put to good use. And is it really so surprising that we may not be any different from the Boomers? After all, many of them raised us.

The one major advantage we have over our parents’ generation is that the verdict is still out. Our careers are just starting, we’re relatively new voters, consumers, and community members. What my generation needs is a culture shift: one that emphasizes a philosophical commitment to helping others, not just a few Saturdays a year, a few dollars here and there, but day to day, especially in our work, consumer habits, and lifestyle choices. At a point at which many of us are deciding what to do with the rest of our lives, where and how to live, this is urgent. If we voted, shopped (boycotted or did without), worked, and lived with an eye on the future, we could actually become what Neil Howe and William Strauss prematurely called us in Millennials Rising: “The Next Great Generation.” Rather than pointing fingers at the Boomers, shaming them for the ball that they dropped, what if we picked it up and threw it far?