The All Seeing Eye Emoji

Everything is recorded and everyone is watched, but our shared reality is breaking apart in real time, like a video game glitching. 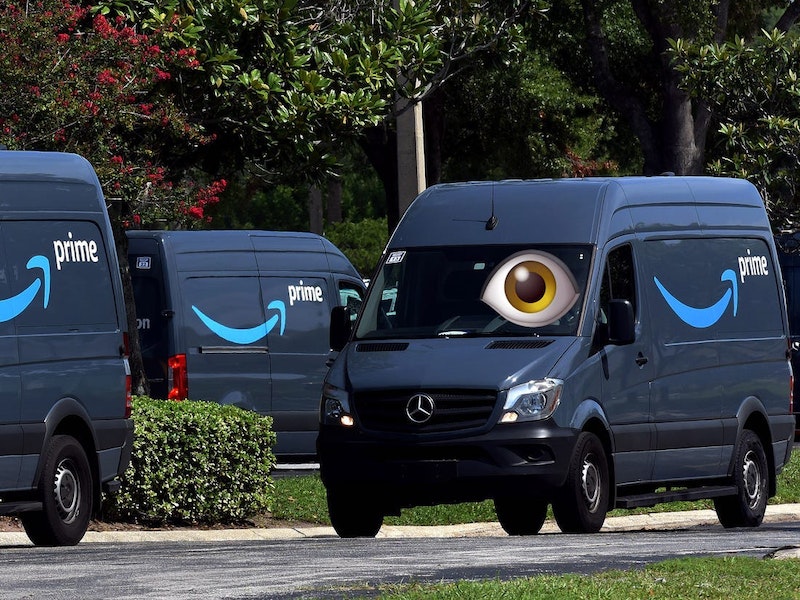 I’m watching you, everywhere. Never mind my name. I might be in the Amazon or Google van driving by your house, catching you through a window or on the sidewalk, going in with groceries. It probably isn’t me, but it might be. Amazon Prime trucks deliver food and junk every day all over the country and they’re watching you.

From a Reuters article last week: “‘This appears to be the largest expansion of corporate surveillance in human history,’ said Evan Greer, deputy director of tech nonprofit Fight for the Future. ‘If this becomes the norm, we are talking about the extinction of human privacy.’” I’m reminded of the end of Charlie’s Angels (2000), when the villain is savoring revealing the mechanics of his evil plan. “In the future, there will be no privacy.” I’ve never forgotten that ending, because it struck me at the time as the most horrifying future civilization imaginable without any kind of forced labor or imprisonment.

“A company spokeswoman said in emailed comments that, ‘this technology will provide drivers real-time alerts to help them stay safe when they are on the road.’ In an instructional video about the cameras, Amazon's senior manager for last-mile safety Karolina Haraldsdottir said cameras will record 100% of the time, but are not set up to livestream from inside of vans. They will detect unsafe driving, including when drivers appear distracted or drowsy, she explained, adding that the footage could be used by the company's safety team, or in investigations of theft or accidents.”

Just a few uses for comprehensive footage of the American landscape, along with receipts. On one hand, this isn’t new in the West: most of the U.K. has been surveilled by CCTV systems for over a decade, and it’s not as if electronic eyes of all kinds—security cameras, phones, laptops, all “smart” devices (which could be just about anything now)—belong to the distant future. We’re watched, and it’s been a while. Anything can be blackmail.

A conceptual vehicle by Nissan would offer its users and patrons the opportunity to work from “anywhere”—like your car. If this looks a little too much like a prison, you have eyes, and a brain functioning beyond alpha state. This isn’t on the market yet, but it will be, or a similar vehicle, in a year or two. “Pods” are the modern pox: scattered through cities is the horrific disparity between outdoor dining tents next to people living in tents. Already in an attenuated marketplace, this pre-post-forever-pandemic tunnel vision is making people blind to the unacceptable circumstances around them.

But, “there is nothing you can do.” Really, what can you do besides throw yourself into philanthropy and social services? Relying on devotion and saints of human beings will bring us all to ashes, and there’s no way this country can fix what’s so horribly wrong with economic and material disparity while remaining a reliable and faithful servant of the international business interests that rule the world.

Rape of the land isn’t necessary, but the world’s masters—CEO’s, not presidents or prime ministers—appear intent on scorching the earth and bringing to the West what they wrought in the condescendingly called “Third World”: extreme disparity of conditions and an atrocious health system and situation. Knowing what has happened in Haiti and Africa, is it really that surprising that a quarter of Americans are wary about getting a COVID-19 vaccine? I think it’s a risk worth taking, but these people give me pause! When the World Economic Forum releases and then quickly deletes a video about the “Great Reset” and how in the future, “you’ll own nothing, and you’ll be happy,” I must admit that my trust in world’s masters is tested. Is that so hard to understand?

Once again, one of the most frustrating and sad developments of the last year was the public’s broad acceptance of responsibility for the virus and how it’s played out in the United States. Whether you think it’s fake, or just the flu, or a liberal pandemic, or you’re wearing two masks inside your house right now with all of the lights off and three TV’s all tuned to MSNBC, or you’re normal, the coronavirus is anybody’s fault but the government’s. No. The disaster of this pandemic in our country is not principally driven by the rich holding super spreader events, or lax mask usage among (pick your demographic), or the will of the people.

The COVID-19 pandemic is the fault of the United States government as led by Donald Trump and constantly contested by his Democratic opponents. Besides Trump’s blatant and disgusting delusions about the virus and irresponsible behavior at every single event he ever gave regarding the pandemic, he was buffeted by an opposition party and media that would give no quarter and instead of attempting any kind of unity or neutral stance of aid, they were constant correctors and over reactors, giving their own ill-informed and often nonsensical COVID advice (“double masking”? What the fuck is that?).

The result was a public left with no one to turn to, nowhere to get consistent information about the situation. This was not in fact a “turn on any channel” situation: we’ve reached a point where a terrorist attack or a deadly virus could hit and you couldn’t turn on “any” channel. What reality do you want to live in? How do you know if you don’t even know what’s happened in the first place? Everything and everyone is recorded all of the time, but no two camera eyes tell the same story. No two channels show the same world. We’re more than one foot in the door of cyborg land.