This is serious—any of these four women might’ve been killed by the mob on January 6. 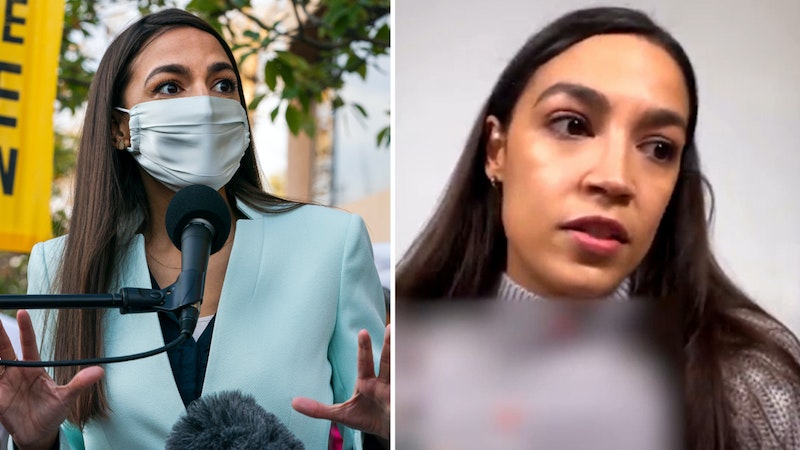 On February 1st, Democratic New York Rep. Alexandria Ocasio-Cortez shared her personal experience of the January 6th attack on the Capitol. Since then, her opposition has been vocal and indifferent to facts.

Initially, the criticism focused on a single sentence: "I'm a survivor of sexual assault." Ocasio-Cortez didn't go into any detail about the assault, but used it for a discussion of trauma and gaslighting. She compared the Republicans' demand to "just move on" to the cycle of abuse, where an abuser compounds their victim's trauma by dismissing it. Critics were quick to suggest that her declaration of surviving sexual assault was itself an act of manipulation, and an insult to compare the behavior of Republican lawmakers to domestic abusers.

Two days after Ocasio-Cortez posted her video to Instagram, blogs like the Daily Caller were picking apart her version of the January 6th events. The focus was that she was in an office building that’s part of the Capitol complex, but not the domed building that had been overtaken by rioters, so she has been framed as a liar. In addition, some used this as "proof" that she's too crazy and paranoid to hold office.

In fact, as other members of Congress have corroborated, all of the Capitol buildings were evacuated. Rep. Katie Porter's account is consistent with Ocasio-Cortez's. What stands out to me is that they both described a stretch of roughly six hours, hiding in Porter's office, with little outside communication. In addition, as people were evacuated, they were given no direction about where to go, which is how Porter's office in a neighboring building became an oasis. With Ocasio-Cortez's purported trauma history, it's easy to see, in this situation, where rational fear gives way to panic.

Ocasio-Cortez isn't the lone member of Congress to talk about the riot opening old wounds or the depth of fear. California Rep. Jackie Speier has shared how the experience forced her to relive the moment she was shot and left for dead by members of the Jonestown cult. Colorado's Jason Crow, whose Airborne division in Iraq saw the most extensive urban warfare since World War II, has been open about his PTSD experience. Rep. Linda Sanchez has talked about spending lockdown on the phone with her husband, reviewing her will. But none of them have been picked apart like Ocasio-Cortez. Even Porter's corroboration has, so far, eluded similar scrutiny.

The post-Trump right wing is where irony goes to die. There were five deaths at the Capitol on January 6th, including Capitol Police Officer Brian Sicknick. Two more Capitol police have died by suicide, and others have sustained substantial injuries. The day Ocasio-Cortez was mocked, Sicknick was lying in honor in the Capitol rotunda. As freshman Republican Congresswoman Marjorie Taylor Greene was stripped of her committee assignments for her association with absurd conspiracy theories, Ocasio-Cortez has been presented as insane. And one of the more notable social media creatures to push these narratives has been called "The King of Fake News" for his part in building up the Pizzagate hoax. I can't help wondering if Republicans seized an opportunity to focus on Ocasio-Cortez, and turn attention away from the tragic consequences of the insurrection, and their own congresswoman with a shaky grasp on provable facts. More likely, the timing proved to be a happy accident.

Ever since Ocasio-Cortez and her other contemporaries in the Squad were elected to Congress in 2018, they've been among the favorite punching bags for right-wing media, and abetted by Trump. Since the insurrection, a man was arrested for threatening Ocasio-Cortez's life. In addition, another man was arrested in 2019 for threatening Ilhan Omar. This past week, Rashida Tlaib said that shortly before she was sworn into office in 2019, she received an alert from the FBI about threats. Staffers from Ayanna Pressley's office later revealed that, as rioters stormed the Capitol, they discovered that a panel of panic buttons were removed from her office.

It's not erroneous to conclude that any of these four women might’ve been killed by the mob. Some of the more violent offenders currently remain unknown and at large, including those who made and planted bombs, and Sicknick's killers. A gallows was built on the Capitol grounds. As more video footage and information has been made public, it's a miracle that the few police on the scene kept the entire 535 members of the House and Senate, their staffers, and the Vice President safe.  The past week reminded me of Shirley Jackson’s story "The Lottery." Winning the lottery means whoever randomly pulls the strip of paper with a black dot on it gets stoned to death, sacrifice for harvest. As I scrolled through Twitter, I kept thinking, "AOC got the black dot for the week." If there's an online equivalent to harvest, I guess there's "doing it for the clicks."

I've also considered that perhaps Rep. Greene got Democrats' black dot this week, but there's a definite difference. Greene's interest in conspiracy theories has led to her harassing people. The footage of her following Parkland shooting survivor David Hogg as she boasts of carrying a gun is creepy and menacing. That kind of behavior can't be tolerated from a member of Congress. The core of the criticism leveled at Ocasio-Cortez is that she's improperly experiencing her trauma.

The black dot isn't unique to American politics, and one could argue that Alexei Navalny has drawn Vladimir Putin's. As he was sentenced last week, Navalny argued that the embezzlement charges against him were largely symbolic, that he was imprisoned as a way of intimidating his followers into silence. The same argument applies to Ocasio-Cortez's most vociferous critics, and as the criticism evolved, they proved her original point when they became trapped in their own circular logic, engaging in verbal abuse on social media to prove that they weren't abusive.