Kroger isn't entirely to blame in its hazard pay controversy. 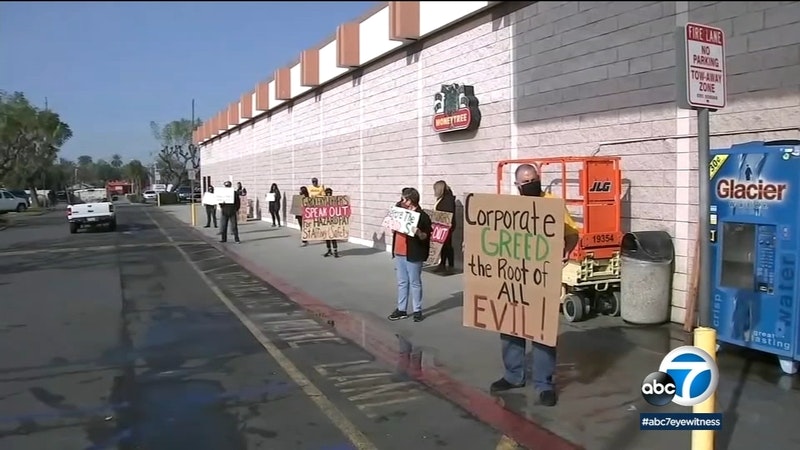 The Long Beach City Council had good intentions, so you know what's coming next. The governing body of that California city passed a law in January mandating a temporary $4 per hour raise—"hazard pay"—for grocery store workers because they face an extra COVID-19 risk at their jobs. These workers nationwide certainly "deserve" it, given that they're putting their health on the line so we can buy groceries, so what could go wrong with the city making sure they're taken care of? Plenty.

Kroger recently announced it was planning on closing two of its stores in Long Beach, meaning that nearly 200 Kroger workers are now facing layoffs or transfers. Some who walked to work don't have cars, so a transfer would be a hardship. Compounding the pain is that the closed stores are in neighborhoods considered "food deserts," so low-income people are going to have an even harder time grocery shopping now.

That was a rotten thing for Kroger to do, given that vaccines should eliminate most of the risk fairly soon, but does the grocer shoulder all the blame? If the city government hadn't passed that law, all these people would still have their same jobs, although not at the pay rate the city council deems appropriate. I wonder whom the workers blame, but I know whom progressives blame—the evil corporation.

You have to wonder if the possibility that Kroger would close down stores in less desirable neighborhoods was even discussed in the formal deliberations leading up the new law. My guess is the topic didn't come up, or was summarily dismissed. Last week, Long Beach Mayor Robert Garcia spoke against the closures during a rally at one of the stores slated to close, but that's unlikely to save any jobs or help struggling shoppers. The city's now going to sue Kroger, so the unfortunate Kroger workers must now rely on the hope that a municipality can legally force a business to stay open and pay workers a mandated wage. What the city needs to do is provide financial support to those its good intentions ends up harming. I don't see any progressives saying this.

America has a long history of good intentions leading to disasters. George W. Bush's administration had good intentions in invading Iraq. They were going to liberate the Iraqi people from a brutal dictator and save this nation from a biological weapons attack. But those neocons, like Kroger, didn't give enough thought to the unintended consequences of an act of coercion, so hundreds of thousands of Iraqis were killed. I didn't see any Democrats giving GWB a pass because he meant well, but they're letting the Long Beach City Council slide.

Anyone arguing that the Kroger employees were in a disaster situation requiring strong intervention from the government should look at the history of disaster relief. When a disaster strikes, many well-intended people get involved by doing more than donating money. They want to start local food or clothing drives, or even travel to the disaster site to lend a helping hand. While it's heartening that we have such good people among us, aid agencies can tell you that donated food and clothing can clog up the supply line, and that sorting and shipping costs often exceed the value of the donated goods. As for altruistic volunteers traveling to help out, local relief staff's then burdened with having to provide logistics, translation, and other services to untrained volunteers lacking the necessary disaster-relief skills.

It's not simple to make an effective disaster-relief plan, just as it's not simple for a government to come up with a way to ensure that certain people are paid at the exact wage it's determined to be "fair."

The New Republic's reaction to the Kroger story is telling. "Kroger Screws 200 Workers Out of Spite," reads the headline. But read the article and you realize you've been clickbaited. The writer, Nick Martin, believes that Kroger's action was a political ploy to send a signal to other municipalities considering similar wage mandates. I agree, so why say in the headline that it was done out of spite when it was actually a strategic move? And why write, as Martin does, that it wasn't a business decision? Similarly, TNR's decision to run that headline was also a business decision—one that reflects poorly on that media outlet.

Nick Martin doesn’t explore why the Long Beach city council didn't anticipate Kroger's political ploy, because left-leaning publications like TNR don't do that. He doesn't write a single word about Long Beach's strategic blunder. This isn’t a defense of Kroger, which is using its record earnings from the pandemic (more people are cooking at home) to buy its own stock back (a gift to stockholders) while at the same time planning to hurt low-income people by closing stores. That's despicable, and I'll avoid Kroger’s from now on whenever possible. But what governments and certain websites need to understand is that corporations are amoral. You're up against an organization with no moral boundaries and no compunction about harming non-investors, so tread lightly unless you have the power to enforce your will. The Long Beach City Council found out too late that it lacks this power, and now others have to suffer. The Council's now playing the blame game, because the last thing it wants to do is take any responsibility, and it knows progressives will let it off the hook.