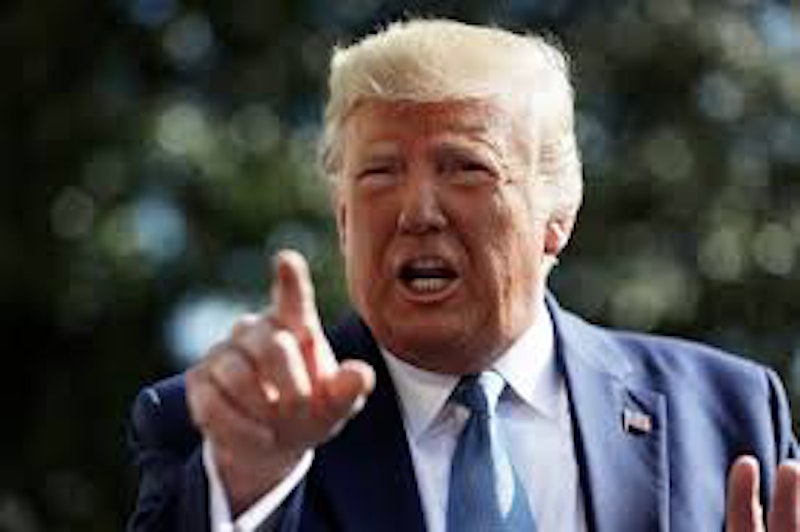 “This is quite chaotic,” remarks an unnamed person who conducts diplomacy for China. A reporter from CNN wanted to know the person’s response to recent behavior by Donald Trump. Out the words popped and it’s no mystery why. Trump is a rock ‘n’ roll president, a rock-em, sock-em chief magistrate who sends the rules flying while the fuddy-duddies soak their collars with sweat. Like Jimi Hendrix humping a guitar or John Belushi producing a belch, our Boomer king lets his wild self rip so that its anarchic energies can goose the world and set free that riff, that fart joke, that clamorous, furious, miscapitalized tweet (“It is INCREDIBLE to watch and read the Fake News and how they pull out all stops to protect Sleepy Joe Biden and his thrown out of the Military son, Hunter, who was handed $100,000 a month (Plus,Plus) from a Ukrainian based company, even though he had no experience in energy...”)

Or that telephone call to a foreign leader. Normally presidents have to be led through this sort of thing. But Trump doesn’t prepare for his calls. “When I was at the White House, there was a very deliberative process of the president absorbing information from people who had deep substantive knowledge of the countries and relationships with these leaders. Preparation for these calls was taken very seriously,” huffs an Obama alum to The Washington Post. “It appears to be freestyle and ad-libbed now.” You bet, grandpa. Trump has Hulked his handlers to one side, and the National Security Council better get used to it.

The Post says that once Trump “preferred to make calls from the residence, which frustrated some NSC staff and West Wing aides who wanted to be on hand to give the president real-time advice. If he held the call in the Oval Office, aides would gather around the desk and pass him notes to try to keep the calls on point. On a few occasions, then-Chief of Staff John F. Kelly muted the call to try to get the president back on track, two officials said.” That was then. Nobody pressed the mute July 25, when Trump had his ill-fated conversation with President Zelensky of Ukraine. One hears that Mike Pompeo, the secretary of state, listened along and that doing so is unusual for a secretary of state. But if Pompeo stopped anything, it lurks in the ellipses of the rough transcript. He appears to have been there to get the bad news early and possibly to hide it, as was done after Trump’s June telephone call to China.

In that call Trump told China’s President Xi he’d keep quiet about the Hong Kong unrest, and he dwelt on the political prospects of Elizabeth Warren and Joe Biden. Biden’s son has been accused by Trump of making a crooked $1.5 billion in China. Was the call (disclosed to CNN by “two people familiar with the discussion”) an attempt to have Chinese prosecutors get on the Bidens’ case? Questioned on the White House lawn by reporters, Trump bellowed his defiance. “China should start an investigation into the Bidens, because what happened in China is just about as bad as what happened with Ukraine,” he said, and “It’s certainly something we can start thinking about. Because I'm sure that President Xi does not like being under that kind of scrutiny.”

As press reports have noted, Trump said this in the middle of a heated trade dispute with the country whose criminal justice system is supposed to nail his enemy. But where others see self-dealing and conflicted interests, Trump sees a blow to the fuddy-duddies. Like the rascally drunk who’s caught farting, Trump stands, bows, and farts again, good and loud for everyone to hear. Marco Rubio and Jim Jordan say the boss is having his joke. No, he’s letting loose, which is something quite different. He’s got to be him, authentic as flatulence, greedy as a brat with fries. He wants China to get him some Bidens and nobody better tell him that’s wrong. “This is quite chaotic,” says the wan Chinese diplomat. That’s the President, baby. That’s rock ‘n’ roll.