As Sanders and Biden Fade, Trump-Removal is Urgent

We must remove Trump from office by next summer. 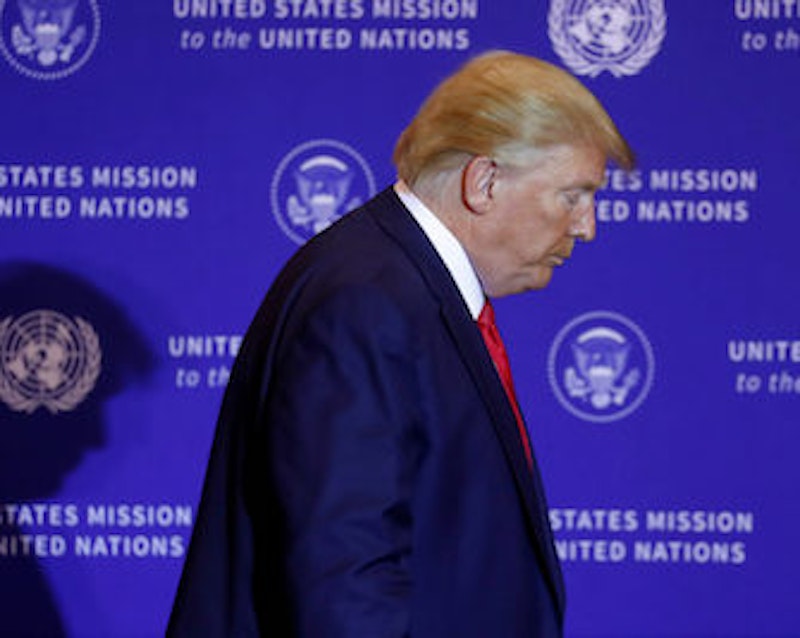 It’s likely we’re seeing the last few days (or weeks, at most) of the Bernie Sanders and Joe Biden campaigns. I'm not sure, of course, what Bernie's doctor might think is best for him after his heart attack, but it might not be maximum stress, non-stop travel and bellowing about the rich. On the other hand, I don't want to subject him to my age and health-based prejudices, and perhaps he'll take a little break and keep right on going. Perhaps not, however.

I think everyone should take this opportunity to hop off the Joe Biden campaign, and the whiff of corruption around what he does for Hunter, and the concomitant vulnerability to Donald Trump, is liable to provide the occasion for them to do so. Despite the fact that CNN hosts and many others have asserted that both Bidens have been completely exonerated—by which they appear to mean that Ukrainian prosecutors, operating under pressure from the Vice President of the United States, dropped the investigation at some point—it has that whiff. Trump has already gotten what he wanted by extorting Ukraine, in other words.

People have tried hard not to register what a miserable candidate Biden is. He's struggled to respond coherently to Hunter/Ukraine imbroglio, but then again he's struggled to respond coherently to any policy question, or any matter on which he has made remarks of any sort. Perhaps we'll see him bow out gracefully, if incomprehensibly, and go take care of his family some more.

So that leaves me thinking, as I've thought since near the beginning, that Elizabeth Warren will be the nominee. In order to make it that far, however, she'll need to negotiate the rugged and fog-shrouded and deadly terrain of American politics now. It's going to be an unbelievable assault, by facts, fictions, hacks, memes, rumors, and lies lies lies. An early wave came in last week, when right-wing tricksters trotted out a bodybuilder type who said he was a gigolo who'd been servicing Liz for years. This strikes me as unlikely, and she responded with humor, which was the right approach. But things like that are liable to prove rather irritating when they reach the 20th iteration or so.

She'd better have extreme information security around the history of her personal and professional life and campaigns, because right now any foreign or domestic intelligence service that could obtain her emails would be making the President very happy. Indeed, they’d be responding to his specific request. Early in the year, Trump said that he expected Biden to be his opponent. I think he has mostly taken care of that, by extremely dirty and straightforwardly impeachable means. Now Warren is up to bat and it's going to be all beanballs.

At the same time, Microsoft is reporting that hackers linked to Iranian intel have been trying to work their way into the Trump re-election campaign. Assume that this is the tip of the iceberg; everyone is going to be hacking everyone all the time. This will be an entirely new sort of election, where we're going to be trying to discern the vague shape of what's coming at us through the cloud of disinformation.

Trump ought to be removed from office over the Ukraine matter, and it's urgent, because if he makes it to the general election, it will lose even the last shred of the appearance of legitimacy. First, he’s explicitly inviting everyone to destroy his opponents any way they can, and he’s willing to give weapons systems or aid packages in exchange. Then he’ll insinuate every rumor and slander onto his Twitter feed, after which every news outlet will be obliged to report the slander, even if they mark it as such.

Meanwhile someone is liable to pop open Warren's phone and files, for example, and give us her supposed browsing history, or a cache of every text she has ever sent or received, or her Harvard personnel file, or that difficult exchange of postcards she had with her boyfriend in 1979. If that doesn't work, they'll just make some stuff up. Trump will be pushing for official investigations; his intel services are likely to at least make gestures in that direction, if nothing else, to save their own skins.

Democratic front-runners may be knocked off one by one right up through the convention. They've taken out Biden (I think). Next up is Warren. If surveillance coming from seven different directions finds or invents the fatal flaw, they'll turn their attention to the next one. Pete Buttigieg, for example: if he were to rise from the pack, we're liable to get the full flavor of his coming-out process as represented in every email he ever wrote, for example; these things are never perfectly smooth. And then, has he ever sent anything sexy to his husband, or anyone else? Liable to be paraded on the front pages in the most humiliating way possible. Same with Kamala Harris' correspondence with Willie Brown, and so on until we're down to a John Hickenlooper comeback, or until Trump is entirely certain that he has someone he can beat.

Only fools and masochists will run in 2024. Who has lived a life that would really withstand total public exposure of its worst moments? Come November next year, no one is going to have the means to sort the right or fair result from the unbelievable chaos of covert information and bullshit slanders. This will be bad if it's Warren against Pence, or Harris against Romney, or Buttigieg against Nikki Haley. But if it's anyone against Trump, it is just going to be dirty tricks. Then there will be another impeachment procedure, perhaps, but also American democracy will have been discredited top to bottom.

Removing Trump from office by next summer, in other words, is extremely urgent. And justified.