The Meaninglessness of Death Threats 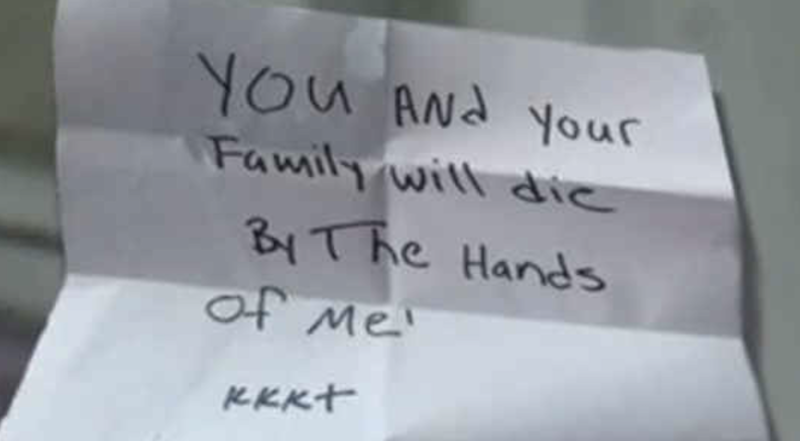 A recent ABC news headline informed us that some South Carolina high school students were receiving death threats because an old video surfaced that showed them, as the network reported it, "using the n-word." When Trump was attacking the congresswomen known as The Squad in July, the media reported that they got death threats as a result. An unpopular female contestant in the U.K. version of The Apprentice got death threats last week, according to the media. What do these three cases have in common? Nothing much. Death threats are about as meaningful as a Trump tweet about his IQ.

Death threats are like the Venezuelan currency. A roll of toilet paper costs 2,600,000 bolivars because there are way too many bolivars in circulation and so little to purchase with them. Similarly, society's suffering from death threat hyperinflation because there are so many of them happening, with so little follow through. Still, the media reports them as news.

The death threat's the modern, dramatic way to express hate, not a precursor to violence. Try to recall just one time a public figure who'd received a death threat was actually attacked. Those issuing death threats are mostly anonymous geeks stuck in front of computers. They're powerless cowards looking for a way to assert some power using death threats to intimidate and coerce, not as a warning. A warning would thwart their intentions, if they actually had them. A Quartz article quoted former Secret Service agent Angela Hrdlicka as saying that those who are "highly motivated to do harm won’t typically verbalize it.”

People who legitimately plan on killing someone just do it. Lee Harvey Oswald didn't give JFK a death threat before he shot him. John Lennon and Ronald Reagan didn't get death threats from their shooters either.

A CBS headline from June announced that Rep. Rashida Tlaib had broken down in tears while recounting a "death threat" she'd received, which read as follows: "Attention, Congresswoman Alefandria Ocasio-Cortez and ragheads Rashida Tlaib and Ilhan Omar. I was totally excited and pleased when I heard about 49 Muslims were killed and many more were wounded in New Zealand. This is a great start. Let's hope and pray that it continues here in the good old USA. The only good Muslim is a dead one."

While this is abhorrent, to "hope and pray" for deaths is an expression of hatred, not a death threat. The media, biased and incompetent, reported it as a death threat anyway, even though there isn't even one word in the message implying action of any kind. Their sympathy for this particular politician—a Republican wouldn't qualify—overrides the responsibility they have to report the truth.

How delighted the author of that twisted missive must’ve been when a member of Congress put his handiwork into national headlines and threw in some tears as a bonus. So why hand the lowlife this gift? Was Tlaib shocked that a person hates Muslims enough to want them dead? In Palestine, where her grandmother lives, it's commonplace for Muslims to be "excited and pleased" by the deaths of Jews. Which Jew it is doesn't matter. Tlaib put this performance on because she was trying to get the email she'd received classified as "domestic terrorism."

In April, the Huffington Post reported that a man was arrested after making death threats "against three Democratic lawmakers." Two of the lawmakers named were Rashida Tlaib and Rep. Ihan Omar, but here's the entirety of what it reported him as saying that relates to the two of them: “Tell your Taliban friend [Rep. Ilhan Omar] to shut the fuck up about 9/11. This ain’t Trump’s fault... it’s all your people’s fault. You definitely don’t tell our president, Donald Trump, what to say. I’d like to take that bitch and throw her right off the Empire State Building.”

Those words were left on Tlaib's voicemail, but none of them even reference her, much less constitute a death threat against her. As for the Empire State Building, I suppose HuffPo would have us believe that when Ralph Kramden, on the old Honeymooners show, balled his fist and said to his wife, "To the moon, Alice," that he was making a death threat.

Anonymous death threats against public figures (aggrieved individuals making them against specific people are another matter) should be treated like we're told to treat the threat of terrorism—if you make a big deal about your fear of it, the terrorists win. There are plenty of Jewish politicians who receive death threats, but you don't hear them talking about them. There's a reason for that.

Let's have no more talk of brave politicians "enduring" death threats. When the media reports that a politician has received death threats, just ignore it. It's not news.