The Democrats' Plan to Win California in 2020

L.A. LGBTQ event shows the party has no plan to win crucial states. 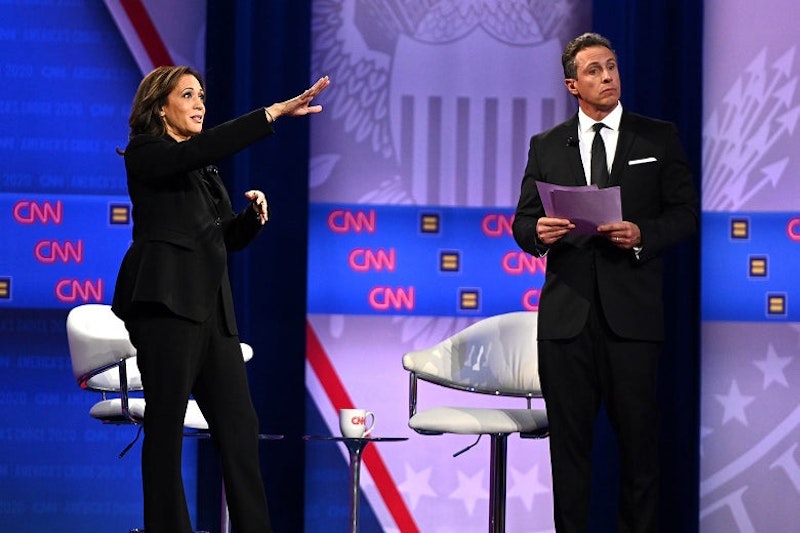 Joe Biden is a passionate man who likes physical contact with his interlocutor. The topic was gay marriage and Anderson Cooper—a gay man—was onstage with him. The setup was perfect for his hokey schtick, so the fading candidate pretended to kiss the CNN host in making a point about how he's always supported gay marriage.

It was Biden at his weirdest, but there was plenty more wince-inducing material at the Democrats' LGBTQ town hall last week, even beyond the former VP's freaky mention of "round the clock sex" at gay bathhouses. Take, for example, Chris Cuomo, champion of all progressive causes, introducing Kamala Harris. The California senator immediately—and awkwardly—announced that her pronouns are she, her, and hers, as if people couldn't figure that out by themselves. Cuomo, slow on the uptake, seemed to think it was a joke despite the circumstances, so he breezily replied, "Mine too." Harris, at a loss for words over this inanity, responded with "alright," but it wasn't alright, just like much of the event wasn't alright. Cuomo later apologized on Twitter and was forgiven without further ado for his mocking quip, unlike the blitzkrieg Tucker Carlson would’ve experienced in the same position.

Trump had a rough week, consumed with the impeachment inquiry and blowback after his decision to stop protecting the Kurds in Syria, so the Democrats acted like Democrats and decided to give him a little gift to ease his pain. Beto O'Rourke obliged. With his presidential hopes sinking, the Texas candidate's decided, out of desperation, that getting to the left of all his competitors was his only option. On Thursday night in Los Angeles, Beto called for an end to tax-exempt status for religious institutions opposing gay marriage: "There can be no reward, no benefit, no tax break for anyone or any institution, any organization in America that denies the full human rights and the full civil rights of every single one of us."

That declaration wasn't well-received among Republicans, especially the tightly-wound paleoconservative standard bearer Ben Shapiro, who had a meltdown on his podcast and responded, "Beto O'Rourke does not get to raise my child. And if he tries, I will meet him at the door with a gun." While that may be an overreaction, there's a long history of court decisions affirming that the government cannot punish churches for teaching "unacceptable" or "offensive" beliefs. But in Beto's fantasy world, he's going to be the progressive hero who confiscates Americans' rifles and updates all their repressive, faith-based beliefs.

The Democratic Party should disassociate itself from Beto's beliefs regarding organized religion, as they only play well in states that are already guaranteed to vote blue. In crucial states like Wisconsin, Michigan, and Pennsylvania, people don't want their churches to lose tax-free status even if they support gay marriage themselves. And then there's the matter of all the mosques and black churches that would suffer from such a policy, a reality that O'Rourke forgot about in his zealotry for going after the Christians, who are generally fair game in his party.

Elizabeth Warren got laughs with a "zinger" tailored for the audience when asked how she'd respond if someone told her that their faith tells them that marriage is between a man and a woman. "Well, I’m going to assume it’s a guy who said that," replied the Senator from Massachusetts, "and I’m going to say, ‘Then just marry one woman. I’m cool with that, assuming you can find one." Perhaps the audience wasn't aware of it, but the various faiths opposing gay marriage don't just teach that to "guys," and in particular guys who'd have a hard time finding a marriage partner. But why miss an opportunity to take a cheap shot if you have the mic and are looking to please? Let's see how that attitude plays in the general election.

Warren surely knows that as many women as men oppose gay marriage on religious grounds, but she's unaware of being a leader of a quasi-religious movement herself that's just as intolerant as the Christian churches her party looks down upon. Modern progressivism, with all of its litmus tests and dogma, is a faith community without a deity that's run out of patience with ancient religions rooted in things like natural law instead of the progressive obsession with "equality."

Warren's sect doesn't do strategy well. Pious people have little ability or interest in appealing to those outside their fold so they can "win" some sort of contest. Their beliefs are immutable, so they speak to please each other, just as the Democrats did in their L.A. pander-fest. This approach works in a church, where there's no room for competing versions of theology, but in the political arena a more ecumenical approach is called for.

There's a fundamental imbalance in the Democratic Party that should’ve been fixed after 2016. The power centers are on the east and west coasts, but the voters they need to win over are in between the coasts. This predisposes them to putting on grand, but empty, spectacles like the LGBTQ town hall that they'll have to answer for in the general election, as opposed to events aimed at the heartland that emphasize healthcare, education, and livable wages. Trump can always find solace in this flaw.