That Hero’s Death? Not Trump’s Fault

It was the generals, chief exec confides. 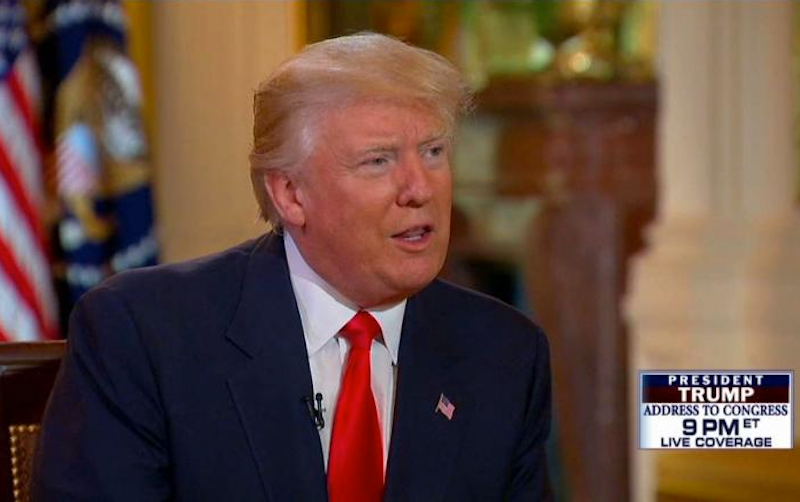 One hears that this Trump fellow gave a speech to Congress. I prefer to talk about his interview with Fox & Friends. That’s how he started his big day, by sitting down with Steve and the rest. The team wanted to know about the Yemen raid and the dead Navy SEAL. Trump brought up the generals. “This was something they wanted to do,” Trump said. “They came to see me, they explained what they wanted to do. The generals. Who are very respected. My generals are the most respected that we’ve had in many decades, I believe, and they lost Ryan.” That’s the SEAL who died.

Predictions about the ghastliness of a Trump America have been flying about for a year or so. Camps, graft, a cratered economy, a crippled franchise—that stuff. But yesterday’s interview was something no Trump hater would’ve predicted. It was more something that we’d assume. You’d just figure that if Trump was running things, the nation’s chief executive would be on TV explaining that his first military mission wasn’t his fault. He’d be saying it was too bad about the dead guy, and he’d be passing the buck with an easy overhand motion.

All right, Fox & Friends was a touch. If, a year ago, I’d told myself that Trump would be making his remarks specifically to Fox & Friends, I’d now be pretty smug. Of course, a year ago I’d have meant the idea as a joke and have considered it a bit obvious, humor-wise. But Trump went ahead and did it. So, to recap: the nation’s chief executive decided to order a military raid in his first week; the raid was botched and caused a serviceman’s death; the chief executive dodged responsibility; he did so while talking on television with Steve Doocy. That’s where America’s at now.

Admittedly, Trump’s misfired raid and its attendant tragedies (not just the SEAL, but the dead children and other civilians) don’t measure up against the misfired war and accompanying holocaust brought on by George W. Bush. Much as Trump blamed his generals, the Bush team blamed the intelligence agencies. Worse, the Bush team had previously blamed the agencies for not being sufficiently gung ho about the need for a war. Whereas Trump’s secretary of defense really did say the Yemen mission should go ahead. (At least that’s what “a White House official” told [http://www.cnn.com/2017/02/03/politics/yemen-raid-trump-obama/] CNN.) On the other hand, Trump’s just getting started. We’ve seen his early form. Who knows what cataclysm he’ll produce when he’s had time?

With the awfulness of Republican rule always getting more awful, the arrival of the Defect-in-Chief confronts defenders of decency with a pretty problem. Given that the waste of lives is a horrendous thing, how can it be so much worse if the chief executive—and not his flunkies—passes the buck for the wasted lives? Either way the deaths are a tragedy and the buck passing a disgrace. Well, for what it’s worth, the new awful thing is that the chief’s public behavior and private machinations are at the same level. Bush’s people at least knew that their buck passing was too grimy for the President to be involved. Trump has no idea. The Bush team’s choices were shameful and so are Trump’s. But on top of that he’s shameless. This is something he demonstrates every day. If we stop noticing, we deserve what we’re going to get.