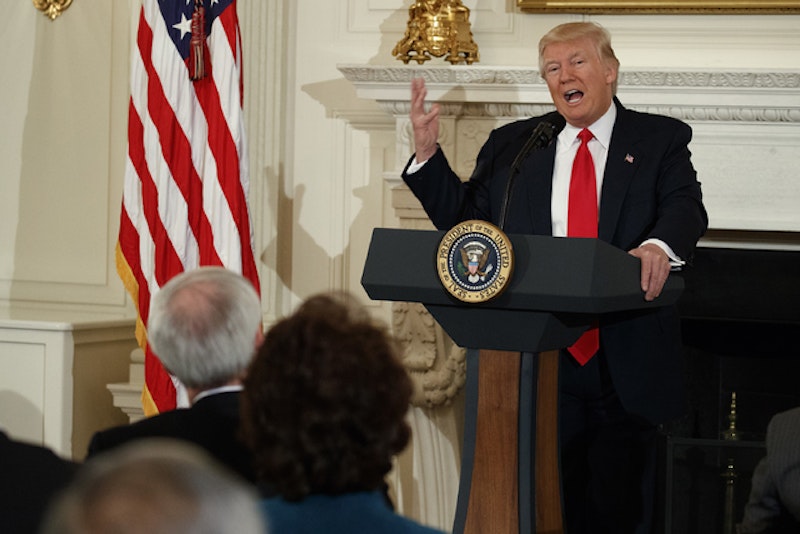 This is fun. Try Googling “He says some crazy shit sometimes.” Okay, you knew. That’s somebody talking about Donald Trump. The person talking is identified by Politico as a “senior GOP aide,” and he’s discussing life under our new chief executive. Now here’s an associate professor of international relations talking to The Atlantic. “The amateurism of Trump is absolutely unique,” he says. “I honestly have never seen anything like that in an established democracy.” Finally we have the man himself. He’s sharing his thoughts with a gathering of the nation’s governors. The topic: health care. “Now, I have to tell you, it's an unbelievably complex subject,” says the boss. “Nobody knew health care could be so complicated.”

That is some crazy shit. In this case, unlike other Trump shit, it isn’t petulant or extreme or a shameless lie. It’s just so dopey and hapless that it’s grotesque. Everyone knew health care was complicated. Everyone but Trump, who figured he had the answers because his mouth was open. Now he’s in office and he just found out that “replace with something terrific” doesn’t work absent something terrific. Jared Kushner and Steve Bannon have their doubts about yanking Obamacare right away—too many people use it and would be pissed off. Paul Ryan and Mitch McConnell want to put a bill through and make repeal happen. But Jim Jordan, a top guy in the Freedom Caucus, says that bill is too weak and maybe his boys will vote against it. What’s the Freedom Caucus? Well, Trump might know. But if he doesn’t, and he finds out now, he’s in for a shock.

The above is just the politics of the matter. The mechanics of health care, figuring out what changes the bill ought to make (if any), are a lot tougher. Not only is this news to Trump, he figures it’s news to everybody. He’s never looked at the situation and wondered why everyone else—those senators and congressmen and health analysts and the fellow who was president for eight years—would have so much trouble with the very same issue that he was going to knock it out of the park. Perhaps he never thought he’d get to bat. But, now that he’s there, why is he telling the governors how surprised he is by the facts? He should’ve known he was lying and be prepared with some bafflegab.

Here speculation grows murky. I suspect that Trump the bluff artist can talk his line of bullshit because his mind instinctively keeps some very big, fundamental dots unconnected. His state of mind is so disordered, so primitive with regard to reality testing, that no hidden doubts are there to stop him from spraying the world with his ego gas. That’s why he’s so dishonest but so authentic: other presidents lie, Trump can’t tell the difference. He’s in office because of a psychic deformity.