Ten Truths About the Age of Trump 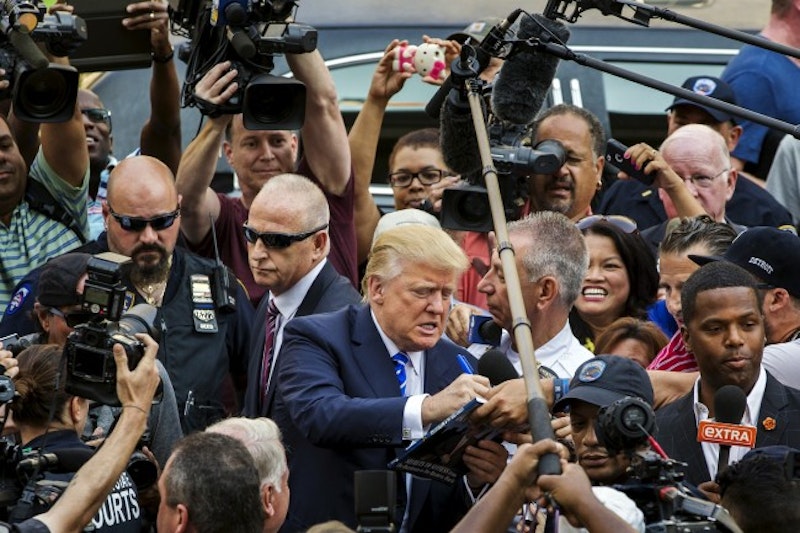 —A question Tucker Carlson will never ask: “How about those private detectives in Hawaii? You said they had something and they didn’t. So what about that? Now you’re telling us all this other stuff, and why should we believe you?”

—Somewhere there’s a painting of Kellyanne Conway that looks great and keeps on looking greater. Meanwhile, the flesh version of Kellyanne has a worm poking out of its eye. The shrewdest gal in Washington doesn’t notice that she’s a wizened teeny-bopper. This rotted cheerleader somehow passes mirrors without flinching.

—People buy big flat-screen TVs for little money down. The TVs are cheap because they were made abroad or by machines. And because the sets were made abroad or by machines, many of the people who buy them are hard up. The good jobs went elsewhere, and what these people got in return was cheap and powerful electronics. As the screens became bigger and more plentiful, as they filled up battered dens and garages, Donald Trump began to look like a candidate for president. A new kind, of course. The fans see him as a character in their TV sets, an established character from one genre (reality TV) who marauded into the news channels. They don’t follow Trump for policy pronouncements. They want to see how he’ll lord it over the grandees and stuffed shirts. Reporters, pundits, politicians—it’s a round-up of stooges. Then Trump tips them over and the ground outside the garage shifts. Trump isn’t just insulting politicians and talking over reporters. First the Republican Party fell and now the executive branch. Political reality’s changing to go with the show on TV.

—If taking down Robert E. Lee’s statue really bothers you, most likely you want white people to be boss. It’s 2000 miles from Arizona to Charlottesville. People don’t travel that because of a statue nobody heard of. Their motive is the white race. The other side is deciding which statues stay up and which go down. White people decide that, not them. So the elder-care worker from Phoenix gets in the car to save Robert E. Lee.

—You want to be the next president? Imagine using the bathroom after Donald Trump.

—Boris Johnson is a lot of fun at parties and thinks faster than most people. I’d rather know him than any other politician I can think of. But I wouldn’t take his advice, lend him money or leave him with a sandwich I wanted to eat.

—Nipples becoming hard about violence—real turn-off. People who make a display over somebody else’s fistfight always seem puny and loud. They’re tough guys who aren’t actually tough, and that breed has produced much of the planet’s man-made trouble. For Exhibit A, I point to the current leader of the executive branch. Down a few alphabets, around Exhibit Gamma, we have the people flexing their sneer muscles because a liberal didn’t whoop loud enough when a Nazi gets punched.

—The premise for a Trump interview should be that he’s a known fraud.

—That vile scapegrace, a man who fouls himself every time his trousers move. He breathes the fumes of his hindquarters and champs at the thrill they give him.

—America will never be number one again.