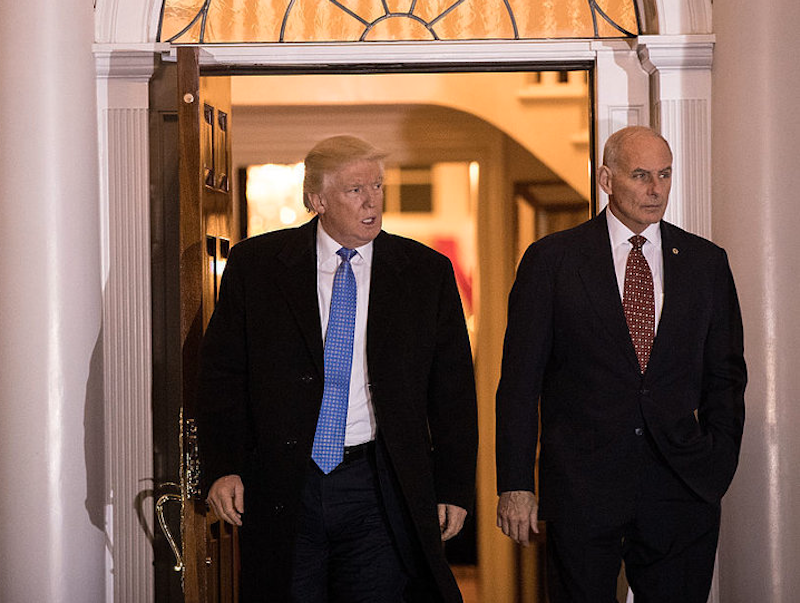 Sebastian Gorka is gone and The New York Times says John Kelly “had telegraphed his lack of interest in keeping Mr. Gorka during internal discussions over the last week.” Removing Gorka counts as a bit of clean-up after the big carbuncle, Steve Bannon, was cut out the week before. The new chief of staff is getting the White House the way he wants it to be, or pretty much. At least he’s forcing out the loud-mouthed distractions with white nationalist ties, which makes for a large start.

Donald Trump puts up with this. What he wants is to destroy, destroy all leakers. John Kelly is his weapon at hand. Replay the past eight months of Trump’s life: the only things that didn’t flop were the Gorsuch nomination and—here we come to Trump’s hot spot—the reign of terror perpetrated on illegals by Homeland Security. Kelly was running Homeland Security; he did that reign. Trump figures Kelly can do the same to the executive branch and its employees.

Trump likes cruelty. He likes people who don’t mind hurting people. Accordingly, Kelly suits him. At Homeland Security, Kelly showed Trump that the U.S. government could kick ass and knock down doors. Or, as we might say, he used the federal government to hunt down and drive out brown people who were living their lives and doing more good than harm. He did it vigorously and well, and Trump has no one else in sight as a savior. Trump hands the White House to Kelly and waits for the situation to get back under control. The first stages involve some splatter, but what else is new. After that Kelly can carve up the real enemy, the bureaucrats leaking Trump’s phone transcripts.

Trump may find he doesn’t enjoy life with Kelly. A last conflict may arrive, and Trump may expel his chief of staff. But then Trump will look for a new Kelly. Trump is doomed to continue this search. A hallmark of his personality is the belief that everything falls in line when exposed to his mighty personality. A hallmark of his life is that most things don’t fall in line, so he gets mad. When mad, his idea of handling affairs turns from jawboning to punishing. He lashes out until reality bends its back and gives him what he wants. Which may be never, but little does he notice. General Kelly is Trump’s lash.

If Trump became dictator, he’d get fed up with the mess that resulted—everything more of a big deal and more complicated than it was supposed to be—and he’d put Kelly in charge. Then he’d be surprised when boots came marching down the hallway and unfamiliar men with guns hustled him toward a helicopter waiting on the lawn.

Bonus Trump. Politico says: “Two people who have spoken to Trump said he sees not building the wall as a personal embarrassment—and that he has shown more interest in building the wall than in other issues, like the upcoming budget negotiations.” A frazzled “White House official” is quoted this way: “You don’t want a government shutdown. He is told that. He says, ‘I want money for the wall.’” Tell that squatting chimp he can call Mexico.

I wonder about this “embarrassment” angle. Trump did spend a year and a half saying Mexico would pay. Now the idea is that we pay, and then Mexico suffers tradewise because of a tax change—I think that’s the story—and the resulting money flow to the U.S. comes out equal to everything we spent on the wall. I think. Oh, it makes me tired. Things began so simply: “Mexico will pay.” And now this. But if Trump is embarrassed, he doesn’t show it. Couldn’t he shrug off a nonexistent wall? He can say it’s the Democrats. On the other hand, a missing wall may cut Trump more deeply than a missing financial arrangement. A wall is something you can see. If it isn’t there, TV screens can show it isn’t there.