Street Violence is Just Getting Started

Three upcoming trials will tear the country apart once again. 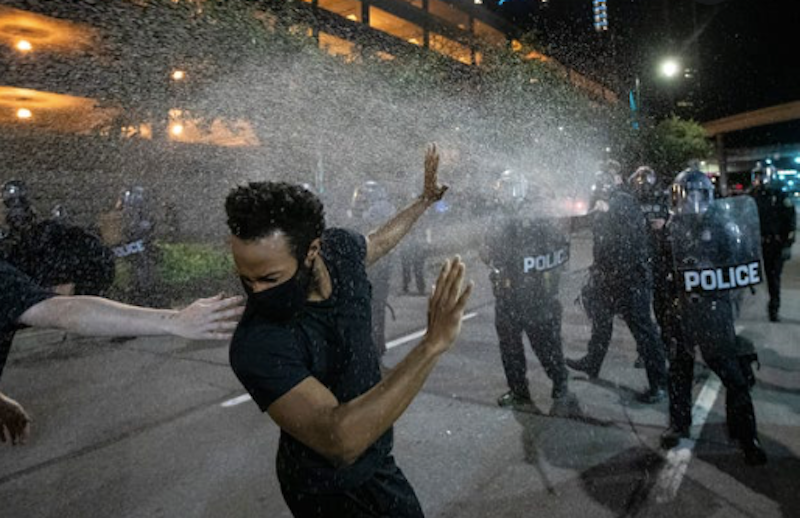 Until recently, right-wingers had little presence during the months of protests in Portland. But tension ratcheted up in the past couple of weeks, with groups like the Proud Boys mixing it up with left-wingers in the streets. When I saw on Saturday that Trump supporters had gathered in a Portland suburb and were planning to drive downtown in an auto caravan in the evening, warning bells sounded.

Downtown Portland is where Black Lives Matter protesters gather on a nightly basis to create mayhem―or what the media calls “mostly peaceful protests." Later in the day, I saw a preview of what was to come—a Trump supporter squared off against a leftie for a street fight right in the middle of a traffic-less Portland highway; Fight Club circa 2020. Later on, the caravan wound its way through the city streets, clashing with counter protesters. The media reported that they were pepper-spraying people, as if no one were hurling objects—and urine, according to one report—at them. At approximately 8:45 p.m., near the corner of Southwest Third Avenue and Alder Street, a videotape of the incident reveals that somebody yelled, "We got a Trumper!" Two shots were fired. A Trump supporter—a member of the right-wing Patriot Prayer group—had been shot dead. The suspect has since been identified as a 48-year-old man associated with the radical-left group, Antifa. Last month he was arrested at a Portland riot for carrying an illegal gun, but he was released and the charges were not pursued. Portland goes easy on such offenders.

Before the fatality, bloodlust had hung in the air in Portland for months. Protesters had thrown explosives, rocks, and even an open pocketknife at cops. They'd trained lasers at police officers' eyes in an attempt to blind them. Finally, the mob got its corpse, and it celebrated the kill with cheers and dancing in the streets. As one woman in the crowd put it, there's no need to mourn a "dead fascist." The death celebration won't make it into the MSM, however, nor will the Portland gun death attract the heavy media attention that the recent gun deaths of two BLM protesters in Kenosha, Wisconsin has. It doesn't fit the black-and-white media narrative that BLM/Antifa protesters are beyond criticism because they're out there on the front lines battling racism, and all Trump supporters are racists.

The assumption by both the Left and the media is that the 17-year-old charged with the Kenosha killings, Kyle Rittenhouse, is a member of a right-wing militia who traveled to that city specifically to shoot protesters, but that's based on what people have heard or surmised instead of any definitive evidence. I've seen an interview of the kid done by a Daily Caller journalist on the fatal night, and he doesn’t strike me as a cold-blooded killer. Contrary to one common narrative, it's unlikely that Rittenhouse initiated any violence. At his trial, he'll probably be able to make a good case for self-defense.

Portland mayor Ted Wheeler said that the killing of a Trump supporter could be a "flashpoint." You have to wonder what the mayor thinks the attempted incineration of the federal courthouse in his city in July was; less serious than a flashpoint, presumably. Trump's been offering to send in federal reinforcements, as a mob has rampaged in Portland every night since George Floyd's death, but that's not a politically palatable option for Wheeler in perhaps the most left-leaning city in the nation. Trump has him where he wants him now, and all the mayor can do is try to blame the President for the violence.

The Portland killing is a gift to Trump. Wheeler disdainfully turned the President's offer down, and then the worst happened. He knew an ugly confrontation was coming, but did nothing to prevent it.

In a press conference the day after the death, Wheeler said, “Do you seriously wonder, Mr. President, why this is the first time in decades that America has seen this level of violence? It’s you who have created the hate and the division.” But Trump wasn't responsible for George Floyd's death, nor can he be blamed for police violence against blacks, which is what has fueled the rage in the streets all over the U.S. Democrats are now saying that Trump wants more violence, which may be true, but they'd be better off pondering what the violence they've been minimizing (Rep. Jerrold Nadler, D-NY, called the violence in Portland a "myth") is going to do to their election prospects in November.

Harris also encouraged people to donate to a fund that bails out violent protesters who were arrested. But she's come to understand, as has Biden, that Trump harping on "law and order" presents a threat. Still, it wasn't until August 27 that Harris denounced the protesters' violence and looting. Biden has belatedly done the same. Previously, they were worried about breaking the coalition. Recent polls and focus groups must be telling them something.

Harris was right about the protests not stopping after the election. The path has already been paved for several more waves of violence. Derek Chauvin, the Minneapolis police officer charged in the death of George Floyd, goes on trial on March 8th, and Minnesota attorney general Keith Ellison has upgraded Chauvin's criminal charge from third-degree murder to second-degree murder. No jury of 12 is likely to find him guilty of that charge, especially in light of the fact that doctors have revealed that Floyd had a sufficient quantity of fentanyl in his system at the time of his death to be fatal.

As disturbing as the James Blake incident is, the Kenosha police officer who shot Blake in the back is unlikely to be convicted of a serious crime. Blake, who had an outstanding warrant for sexual assault, reached into his vehicle while resisting arrest, after already having been tased. A "not guilty" verdict for him is going to be a "flashpoint." Kyle Rittenhouse's trial will reveal that he wasn't a bloodthirsty militia soldier out headhunting liberals. He won't be convicted of the charge that progressives want—first-degree murder. As half the country is already convinced that he's guilty and should be sentenced without a trial, we can expect major unrest.

Joe Biden thinks that all the street violence is going to fade away if he's elected. Did Obama prevent riots in Ferguson, Baltimore, and elsewhere? All it takes is a rumor now to start a riot, as happened on August 9 in Chicago. Biden doesn't realize that the turmoil is just getting started.