The right-wing grifter can't stop embarassing himself in public. 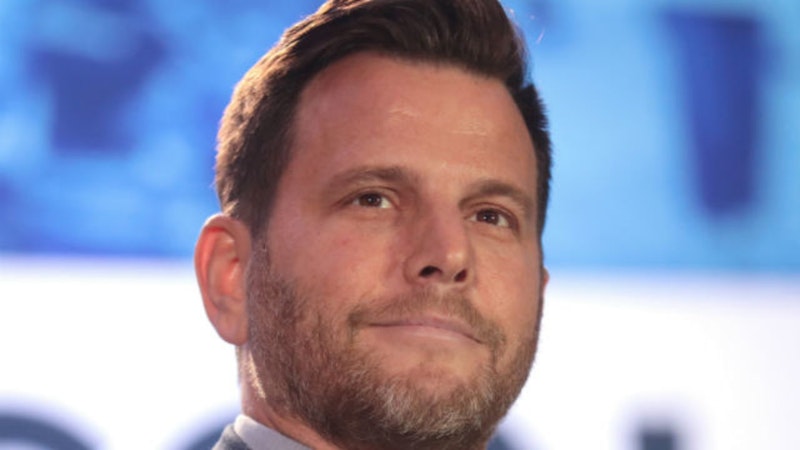 Last month, Dave Rubin, host of The Rubin Report, predicted Donald Trump would get 30 percent of the black vote in November, even though he only received eight percent of that vote in 2016. That was just the latest reminder that Rubin's the only non-intellectual member of the Intellectual Dark Web, which is putting it kindly. The podcast host claims he’s a "facts over feelings" guy, but you'd be hard pressed to find political analysis as dopey as that in even the dimmest corners of the Internet.

Although I had some fondness for Rubin when he left Cenk Ugyur's unwatchable The Young Turks and began pushing back against progressive orthodoxies, his approach to airing his newfound political views soon wore on me. The guy tried too hard to promote himself as one of the few enlightened liberals who can have a civil conversation with anyone, regardless of their politics. Rubin's fawning over now-canceled Milo Yiannopoulos on The Rubin Report rubbed me the wrong way, but the final straw was his interview with Stefan Molyneux, who went on at length, and unchallenged, about the intellectual inferiority of black people due to genetics. Here's a quote from the interview that Rubin let stand: "If a white kid is raised by a black family, he’ll end up with a 100 IQ, but if a black kid is raised by an upper middle class white or Jewish family he’ll end up with an 85 IQ. In other words, it’s all genetics."

Since then, Rubin has regularly made ludicrous comments. While choosing the worst is challenging, a top contender was when he said that he and Molyneux were part of the "new center." Challenged on saying this about someone often associated with the alt-right, Rubin denied having said it, even though he was caught on video saying it. If Rubin's going to be one of those people who choose to gaslight instead of admitting to making a mistake, he's going to have to learn how to lie convincingly. Perhaps he should study master gaslighter Trump, the man he admires but doesn't have the courage to endorse by name. As close as he's come is to tell Democrats to vote for Republicans in November.

Joe Rogan has caught on to Rubin's act. On one of his recent podcasts, he talked about how it's possible to be friends with people he disagrees with as long as their beliefs are sincere. "But if someone's a grifter," he said, "you've got to cast them out." The grifter he was referring to was Dave Rubin. Rogan didn't didn't mention Rubin by name, but it's obvious who he was talking about. A forlorn-looking Rubin stated publicly that he called Rogan "a bajillion times" requesting an appearance on his show to promote his new book, but Rogan wouldn't even return his calls.

Rogan has hosted conspiracy theorist Alex Jones, so you have credibility issues when he ghosts you. Rubin embarrassed himself during his last appearance on the Joe Rogan Experience with a glib libertarian harangue about how the government can't do one single thing right. He chose the USPS as an example of government inefficiency, blathering on about how the price of sending a letter would drop if the USPS no longer existed because "competition would start kicking in" from "UPS and Amazon and Fedex and drones and blah blah blah." So the low-cost provider is eliminated, but that somehow increases competition, and prices go down? He was as coherent as a beauty contest contestant trying to explain how she'd achieve world peace.

Rubin wasn't done humiliating himself. To illustrate his point, he told Rogan he had a good story for him. He talked about recently purchasing some newborn chicks for his backyard via USPS, which delivered them overnight from Cleveland to L.A. That's the whole story. That's right—to illustrate the inefficiency of the USPS, Rubin explained what a good job they did. Rogan, sounding bored and annoyed with his guest's ramblings, then turned the screw, pointing out that the USPS is the only enterprise that will ship baby chickens, something it's been doing since the 1800s. Rubin stammered that he was sure that UPS and FedEx would deliver chicks in the absence of the USPS, even though they'll deliver almost anything now but have chosen not to ship this item.

Rubin has made a lot of money by appealing to conservatives who like to hear a so-called liberal dump on his own tribe. But being for gay marriage and the legalization of marijuana doesn't make him a liberal. Rubin calls himself a classical liberal, but he's really a libertarian. He often sounds like the college freshman who returns home for Christmas after having read Ayn Rand for the first time. In other words, his enthusiasm exceeds his knowledge. He doesn't know that though. "My brain is still in recovery mode," he said not long ago, "taking in so many high-level ideas."

Judging by some of the unintelligible things Rubin says, that recovery is going to take a long time. Discussing his decision to remain in L.A. after contemplating leaving, he said this on The Rubin Report: "If someone like me can't live in California—like it's become so extreme—then the American experiment is over. Okay, we're in civil war." Sometimes the guy gets a little dramatic.

Rogan said Rubin needs to admit he's wrong and apologize. It's unlikely that he’d upset his gravy train by doing that, but one thing’s certain—Dave Rubin is not someone to be taken seriously when he talks about ideas.