Stretching back to the popular Democratic Gov. Marvin Mandel. 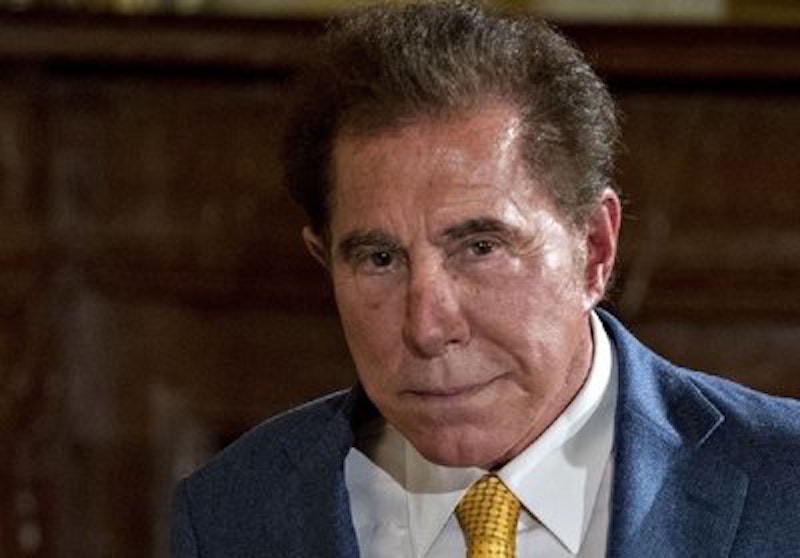 Steve Wynn is as American as money. The casino impresario and Republican moneyman accused of sexual misconduct got his start operating a family bingo parlor in Maryland’s Anne Arundel County. Wynn took some shortcuts on his way to the top, seeking favors from local politicians and befriending the right people in Nevada.

Wynn flew high and fell fast. He’s now under investigation by the Nevada Gaming Board over allegations of sexual misconduct; his alma mater has revoked his honorary degree and has removed his name from its Commons; and he’s been forced to resign as finance chairman of the Republican National Committee. Wynn’s downward spiral began late in January when The Wall Street Journal reported that dozens of women alleged sexual misconduct over a long stretch of time. Wynn denied the allegations which he attributed to the fury of a turbulent divorce.

Wynn had a degree in English from the University of Pennsylvania and a reserved slot at Yale Law School, in his hometown of New Haven, CT, when his father died of a heart attack, leaving the family interests in several East Coast bingo parlors and $350,000 in gambling debts. His father had also changed the family name from Weinberg to Wynn to avoid discrimination.

Among the bingo parlors was Wayson’s Corner, in Anne Arundel County—the only county in the United States that licenses commercial bingo, in the only state outside Nevada that sanctions it. (The exceptions are massive bingo halls that Native Americans in several states operate.) Wynn took charge, worked the bingo parlors himself, and soon turned the family business around and parlayed his success into his current $2.4 billion personal fortune and 279th ranking on Forbes list of America’s wealthiest people. His celebrated art collection includes works by Vermeer, J.M.W. Turner, Monet, Rembrandt, Koons, Van Gogh, Chihuly and Picasso’s Le Reve.

Wynn can trace his bingo connection to the family of Edward O. “Moose” Wayson Jr., the late Annapolis lobbyist and entrepreneur, whose father opened a 750-seat bingo and slot machine emporium in 1950 and who eventually became Wynn’s close friend and legal adviser.

Enter the politics. Sometime in the early-1970s, former Maryland Gov. Marvin Mandel (D) was attending a winter meeting of the National Governors’ Association at a downtown Washington hotel. After breakfast, Wynn and his mother showed up at Mandel’s room for a pre-arranged off-the-books meeting. Mandel asked me to leave the room (I was Mandel’s press secretary). When the meeting was over, I asked Mandel what the unusual arrangement was about: “The local guys are trying to squeeze him and he asked me to intervene and get them to back off.” Nothing further was said, or asked.

That was the start of a beautiful friendship. Whatever happened, Wynn prospered and soon moved to Las Vegas. There, Wynn befriended an influential banker and began investing in casinos and real estate. Along the way, Wynn bought and operated a wine and liquor importing company and, Mandel once confided, at one point, Wynn—through connections—won exclusive alcohol distributorships for the entire state of Nevada.

On another occasion, Mandel was attending a governors’ association executive committee meeting at Lake Tahoe, and was staying at King’s Castle, on the lake’s northern shore, which was owned by Baltimorean Nathan Jacobson. At Tahoe, at the time, all casino and other honky-tonk activity was confined to Tahoe’s south shore while the north shore was lined with pristine forests and costly homes. Jacobson had insisted on building King’s Castle—a riff on Caesar’s Palace, which he formerly owned but was forced out—on the north shore, fought environmentalists for years, and, having finally won, was boycotted for defoliating the north shore, sending his gaudy casino into financial difficulty. He eventually was forced to sell.

On an August day in the 1970s, a gunmetal gray Astin Martin—identical in every way to James Bond’s but for the gizmos and weaponry—eased into the driveway in front of King’s Castle and out stepped a tall, svelte blond, Elaine Pascal Wynn, Steven Wynn’s wife whom he now says is the source of the allegations about sexual misconduct and the cause of his resignation as finance chairman of the Republican National Committee. Steve and Elaine Wynn were married in 1963, divorced in 1986, remarried in 1991 and divorced again in 2010. In 2011, Wynn married Andrea Danenza Hissom.

At her arrival, Elaine said Steve Wynn would be joining her at King’s Castle in two days. And again, when he arrived, Wynn and Mandel huddled on several occasions—by the lake, in the lobby, in the restaurant. Their conversations were private, out of earshot, totally innocent, perhaps, old friends telling tall tales.

It should be noted that Maryland’s bingo industry dates from the 1800s, when tourists from Baltimore traveled on pleasure boats to Southern Maryland, where gambling was among the activities available. Only Anne Arundel has kept the tradition alive, maintaining as many as seven precious bingo hall licenses to this day. Bingo, like the rest of the world, has gone hi-tech, with machines—mimicking slots—replacing cards and other primitive devices.

Bingo has always been big business in Anne Arundel County. In the 1990s, a highpoint, for example, the county’s halls reported gross receipts of $4.1 million, according to the state comptroller’s office at the time, and paid $396,000 in taxes. For prices that ranged from $12 to $39, players could buy a variety of packages that included enough cards to play from nine to 24 games simultaneously during each of the 60 rounds that were played between 5:30 p.m. and 2 a.m. every night. Some 700 to 1000 players showed up to gamble for as much as $20,000 in prizes.

The matrons from the sodalities and the garden clubs who blissfully marked their scorecards with every turn of the numbers didn’t know it, but at one point in the 1990s they were pawns in a cockeyed but potentially dangerous scheme that threatened to subvert the state’s most overlooked industry, the five legal bingo halls in Anne Arundel County. But in a case that received little attention, the mob was busted before the scheme became the cash cow that was intended.

The object of the fed’s affection was an operation called Bingo World, which operated out of a hall the size of a Zeppelin hangar at 4901 Belle Grove Road in Brooklyn Park, a seedy section of Anne Arundel County—a kind of Palookaville, really—just south of Baltimore. The mob decided Bingo World would be the perfect laundry for their ill-gotten gains—sanitize the cash through the bingo parlor and spread it to the beneficiaries as perfectly legitimate legal tender. But the U.S. attorney’s office, FBI, IRS, Maryland State Prosecutor’s office and the Anne Arundel County Police busted the mob after a three-year investigation.

It’s a cash-rich enterprise. Former licensee Wynn, who was a 30-percent owner of the hall called Wayson’s Corner, went on to be owner or developer of such renowned casinos as the Mirage in Las Vegas, the Golden Nugget in Atlantic City, Treasure Island, the Beau Rivage and the Bellagio. Wynn also has a casino in Macau, one in Biloxi and just won a franchise in Massachusetts.

Wynn has been a stakeholder in Caesar’s Palace and MGM casinos. But his properties are no longer called casinos; they are now known as Wynn Resorts. And each new one he builds is bigger, bolder and better than the last. Other locally famous people who’ve owned bingo licenses in Anne Arundel County include the late Jeanne Mandel, the wife of Gov. Mandel, and Bruce Bereano, a top-earning lobbyist in Annapolis.

To the day Mandel died in September, 2015, he and Wynn remained lifelong friends, going back, Mandel often said, to that seminal meeting in a Washington hotel. Mandel shuttled frequently to Las Vegas as Wynn’s guest, and Wynn often sought Mandel’s advice and, as Mandel told it, asked him frequently to act as his lobbyist in Maryland during the push for casino gambling. Mandel said he declined to formally act as Wynn’s lobbyist but continued as Wynn’s unofficial whisperer. Wynn eventually decided not to pursue a casino license in Maryland.

And now, the man who raised and donated money to both Democratic and Republican candidates, but mostly Republicans, will be on the receiving end—from those who feel compelled to return the money for little reason other than damage control and the stain of alleged errant sexual attention. Wynn has contributed more than $1.5 million to the Republican National Committee and other campaigns over the last five years. Wynn is a close pal of President Trump, who has been accused by at least a dozen women of alleged sexual misbehavior.

Among the beneficiaries of Wynn’s largesse is the Republican Governors’ Association, of which Maryland’s current governor, Larry Hogan, is a member. Hogan, though, has never personally accepted a direct contribution, though he attended a fundraiser for the RGA where he was praised by Wynn, according to reports. The RGA has announced that it will return all funds Wynn Resorts has donated for this year’s election cycle, in yet another of the pantheon of the mighty who have fallen.