Both the Democratic and Republican Parties are amoral. 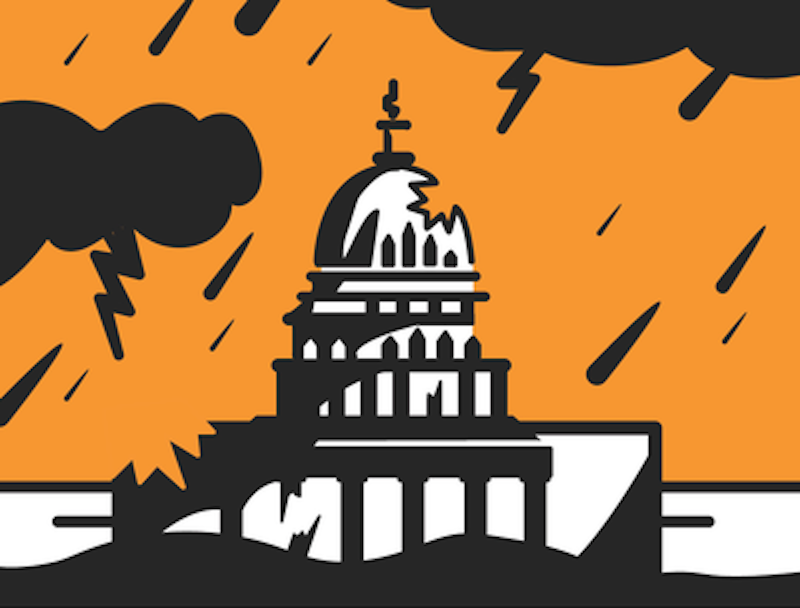 One thing that the Nunes memo makes clear—if you’re still wondering—is that our politicians are, for the most part, incredibly gross people. "Politics ain't beanbag," as the saying goes. It's more like indiscriminate mass shooting or serial rape.

"Opposition research" sounds pretty anodyne. It's not, these days. Hillary Clinton hired the astonishingly well-connected firm Fusion GPS, who hired a former top MI6 spy to traipse around the world in search of dirt. When Christopher Steele brought home the very vivid filth, the Clinton operation tried to peddle it to anyone or everyone, but no media outlet could confirm it. So the Clinton people took it to the FBI. (The FBI paid Steele for the information again; Steele made out like a bandit on this thing.) Then they used it as a justification to get a FISA warrant on Carter Page.

This was, I think, part of a concerted attempt to monitor the whole Trump campaign from the edges, picking up the communications of people who’d have exchanges with the senior Trump staff. Then the Clinton campaign used the fact that the FBI was taking the Steele dossier seriously enough to use it to obtain FISA warrants to sell that dossier to the press, which was the goal in the first place. They laundered the dossier through the FBI, disavowed it and made it sound like an FBI report.

As a reminder, their laundry was an FBI under the direction of Eric Holder and Barack Obama, for whom Clinton served as Secretary of State. Clinton's enthusiastic endorsement and that of her husband helped Obama get elected in the first place (though I speculate that they hate each other), and perhaps he implicitly agreed even in 2008 to support her as his successor. The Nunes memo asserts that the wife of Steele's main connection at the Department of Justice, Bruce Ohr, herself worked for Fusion GPS on the "destroy Trump" account. Maybe that's how Steele got paid double. This is the most interesting bit of the memo.

While we're looking at everyone's texts, I’d like to see conversations between Bruce Ohr and his wife; it may be that the Justice Department tracked Fusion's activities from the beginning and vice versa, that they egged each other on, even as they—like many of those involved in the FBI investigation—expressed their personal political opposition to Trump. In other words, the relevant bits of the Justice Department and the Clinton opposition research operation were… married. One way or another, Ohr stood to gain, on behalf of his friend Steele and his spouse, if the dossier was regarded as plausible to the extent of justifying surveillance that might itself yield new dirt on Trump, including confirmation of elements of the Steele dossier itself. If the information generated caused Trump to lose the election, Fusion GPS would have to be regarded as the greatest oppo research firm of all times, and Trump would never become president. There's no reason that these things would not have been twin goals for the Ohrs, Steele, and Andrew McCabe.

One way they pursued this goal was to leak like mad at every stage of the process, so that if you were watching you got constant hints of the investigation, a drip-drip that they were unable to drive to a crescendo by Election Day, partly because everyone was distracted by the on-again-off-again Hillary email investigation. But long before they even acknowledged that there was an investigation, intelligence sources were leaking the content.

Dismiss that memo if you wish. If you're a Trump opponent, I knew you would, no matter what it said. But it helps fill in the extremely disturbing picture. The Clinton campaign used US intelligence agencies to disavow their unconfirmed blackmail-type facts and get them out into the press. They helped drive the FBI into the surveillance all around the edges of the Trump campaign that will end up bringing the administration down. In short, to a significant extent, with their own party's politicians running the FBI, the Clinton campaign effectively annexed or co-opted the agency and its vast resources as part of its opposition research operation.

Trump's opposition research was a lot more slapdash; perhaps the difference captures the characters of the little monsters that the campaigns hired for such tasks: Roger Stone for Trump, David Brock for Clinton. Be that as it may, the Trump operation was, if anything, even more amoral. The Russian security services contacted them to offer dirt on Clinton in exchange for sanctions relief. The whole most senior staff, more or less—after Don Jr. expressed his enthusiasm—met with agents of the Russian government. Then the emails started appearing, timed for maximum Clinton destruction. Then Trump won the election. Then he stopped enforcing sanctions against Russia.

The Clinton campaign used the American security services to try to destroy Trump, while the Trump campaign used the Russian security services to try to destroy Clinton. Let that sink in for a second. Both of these procedures took the form of exploiting surveillance generated by governments: the true theme of this period of history, it seems, the driver of all events.

Now, the Trump approach is probably worse, as having that whiff of treason and as making the President of the United States potentially subject to control from the Kremlin. But the Clinton operation raises deeper questions about the American political system as it stands right now. First, “the intelligence community,” having achieved pervasive access to all communications, can decide elections. Individuals, factions or even whole agencies can generate material that will destroy almost anyone and leak it anywhere. The intel agencies are to a significant extent under the control of the incumbent party. As a threat to democracy, that makes “fake news” look like cotton candy. In other words, if a smell of treason follows Trump, the specter of an intelligence coup that has already occurred trails Clinton.

I think that in 2016 the intel agencies and the Justice Department got into a muddle. They were thrashing about, perhaps concerned above all—as they certainly were around the release of the Nunes memo—with their own reputation. They were getting pressure from all sides, in particular from their Congressional overseers. They closed the Hillary investigation, re-opened it, re-closed it. They muddled along, and then they wound up with Trump, who’s attacking and firing his way through them relentlessly.

If I were sitting in FBI headquarters, it might occur to me that Trump’s a threat to national security on multiple grounds, including his attack on the security apparatus itself and his Russian connections. And then it might occur to me that we can make sure that the next president is not such a threat. We can eliminate candidates we don't like, and we can to some extent control those we do, because we have many ways to access their communications. Really, it’s necessary for the preservation of the Republic that we control the electoral process. We obviously control it anyway, and the question is how we're going to use that control. We'll use it to keep the country safe, which also means that we will use it to run this sucker.

The idea of a presidential campaign working with the Russian secret service is an anomaly; we probably won't see something like that again, or let's hope not. But real information about the role of American intelligence agencies in American politics and governance, teased by the Nunes memo among other things, raises the question of whether American democracy ended in the surveillance regime instituted after 9/11.

Meanwhile, everyone seems to take it that oppo research is just one of those things we have to accept, just the way the game is played. Not at this level of incredibly destructive corruption and Machiavellian amorality it isn't. Not when they're mobilizing world intelligence agencies to destroy each other. Let it actually register: the people who want to govern us are filthy, interested only in an endless self-aggrandizement. They don't care about you, or about the country; there’s no one and nothing they wouldn’t destroy if it gained them power. The saddest thing about the 2016 campaign was that one of these morally empty people was going to get elected.

If that’s “just the way it is,” if we can't find politicians who’ll stop at something rather than nothing, we don't deserve to continue as a nation; it would be better for all concerned if the government of the United States disbanded. So next time around I suggest we focus on character, and ask each candidate where their real commitments lie. And if a candidate constantly praises American law enforcement, wonder what they have on him. Admittedly, it's hard to make distinctions, because politicians all offer up the same platitudes about public service or, as Hillary, doing it all for the children. So for God's sake watch their actions, watch their eyes.