And undermines the rest of his work. 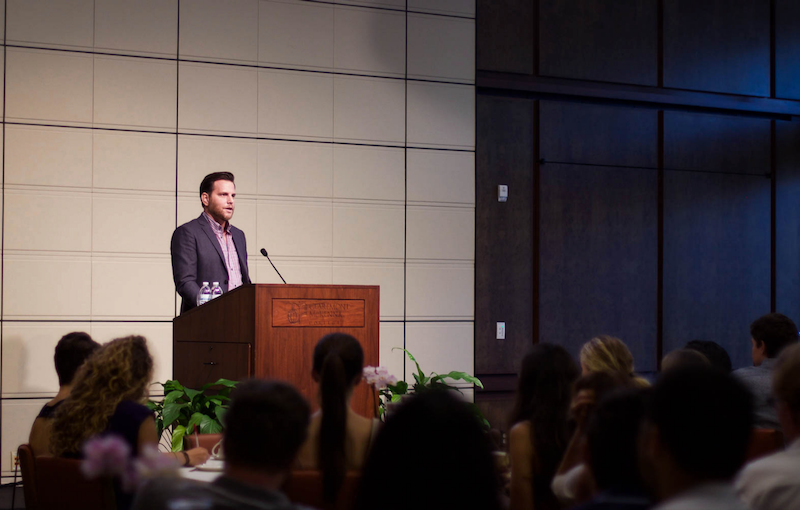 In a recent discussion with Sam Harris, Dave Rubin indulged one of his favorite habits: mocking the mainstream media.

While it’s understandable for Rubin—the host of a completely independent, audience-funded show—to outline his problems with traditional media, his conversation with Harris betrayed a Trumpian contempt toward journalists and the organizations they work for: “As for my criticism of the mainstream media and of CNN and the New York Times, I stand by everything that I’ve said. I mean, there is a reason it is crumbling right now—it deserves to crumble.”

This sounds indistinguishable from President Trump’s crowing tweets about the “failing” New York Times, Washington Post, CNN, etc. Despite the surge in digital subscriptions reported by The New Yorker, The Atlantic, the Times, the Post, and other legacy publications in 2017—particularly among Millennials—Trump and Rubin want you to think traditional outlets are moribund. They also want you to think these outlets are engines of partisan propaganda that publish falsehoods as a matter of course.

At least arguments could be made about the transition from traditional to new media or the shortcomings of mainstream outlets—but Rubin doesn’t stop there. He’s also recklessly dishonest about the way journalists operate, and one of his rants to Harris could’ve come straight out of Trump’s mouth: “How many times do you turn on CNN when all the people who got everything wrong before the election are still quoting their same anonymous sources. Gloria Borger, their chief political analyst—I think that’s her title—can’t get a sentence out without saying her ‘sources on Capitol Hill.’ These are made up nonsense that we’ve just sort of accepted.”

This is what Trump has done to our national discourse. He’s made it acceptable for someone as thoughtful as Rubin to accuse a prominent journalist of fabricating sources without offering a shred of evidence. While there’s nothing wrong with criticizing Borger for relying on sources that sometimes provide inaccurate information (her CNN colleague Wolf Blitzer did so on air last summer), it’s irresponsible to accuse her of “making up” those sources altogether. Rubin is using his huge platform (he has more than 620,000 subscribers on YouTube) to support Trump’s self-serving narrative about the media.

The President has described the media as the “enemy of the American People,” threatened to “open up our libel laws,” and suggested that NBC’s broadcast license should be revoked after it published a story he didn’t like. When Trump issued that last threat, his comments probably sounded familiar to Rubin: “They make up the sources. There are no sources.”

How many times have you seen the words “FAKE NEWS” in Trump’s Twitter feed over the past year? How many times has he accused a reporter of manufacturing a story about him without identifying a single quote or fact that was inaccurate? Trump knows he just has to repeat these accusations over and over again to make them true in the minds of millions of Americans. By increasing the level of anti-media paranoia and cynicism in the country, he’s made it much harder for journalists to hold him accountable.

With his contributions to this effort, Rubin is needlessly undermining the rest of his work. The left’s in dire need of more shows like The Rubin Report—shows that acknowledge the pernicious influence of what Rubin and many of his interlocutors describe as the “regressive left.” Isn’t it disturbing that so many college students prefer to “deplatform” controversial guest speakers or retreat to safe spaces instead of engaging with their arguments? Aren’t many liberals making fools of themselves by describing Trump and all of his supporters as “fascists” or “white supremacists”? Isn’t the toxic phenomenon of identity politics on the right partly a consequence of the obsession with identity politics on the left?

These are the reasons why I’ll continue to support what Rubin’s trying to do. But it’s infuriating to hear him repeat Trump’s flagrant lies about the media. Until Rubin recognizes that confronting the extreme and irrational factions on the left isn’t the same as pandering to Trump’s most dogmatic supporters on the right, the integrity of his show will continue to suffer.