Trump thinks he has eliminated the problem. 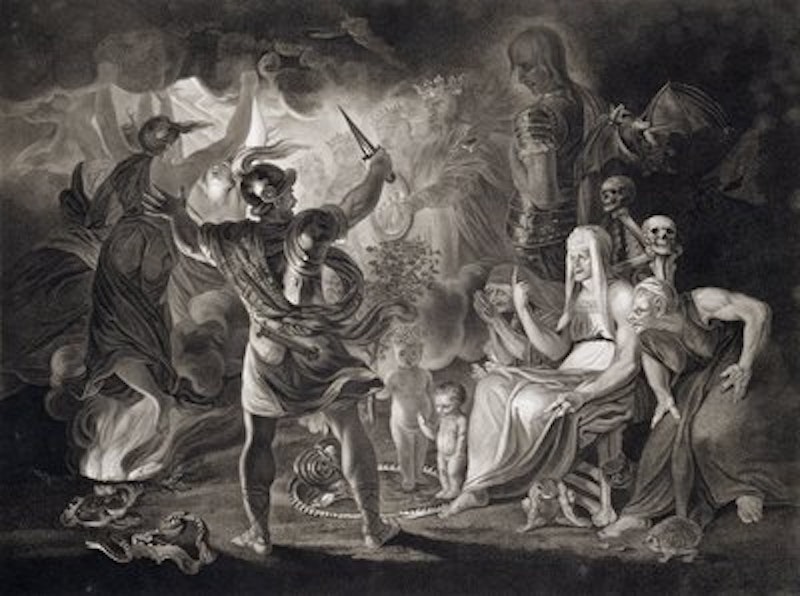 It's an old story. The new king, having attained the crown by first secretly betraying it in some fundamental way, is chagrined and afraid. His subjects do not love him. Ghosts follow him everywhere. He rants incoherently through the night and rarely sleeps, obsessed by the thought that certain powerful lords know his secrets and are plotting against him. The luxuries of his position do nothing to assuage his growing madness. He sees enemies where before there were only supporters and friends. It’s the fatal vision of Macbeth, the paranoia of Kim Jong-un, the homicidal madness of Aerys Targaryen, the supernatural narcissism of Donald Trump.

And when there is a Macbeth, there must eventually be a Macduff. As Macbeth grows delusional, Macduff grows suspicious. Macduff is an idealist, as much a universal archetype as a mad king. He's a loyalist, not to the person wearing the crown but to the integrity of the office. So he cannot be bought, intimidated, or otherwise compromised. Consequently, the unsettling complexities surrounding Macbeth's ascension seem troubling to Macduff, then inexplicable, then damning. He decides he must act. At the same time, Macbeth decides he must be rid of such a patriot.

For a brief moment in the fourth act, Macbeth feels like himself again. His uncertainty disappears. The terrors of the night have coalesced into flesh and blood, a tangible problem that can be solved with a tangible sword. And so he vows, “To crown my thoughts with acts, be it thought and done: The castle of Macduff I will surprise.”

But this is a grave mistake. It begins the inevitable spiral leading to Macduff taking “the usurper's cursed head,” Jamie Lannister stabbing Aerys II in the back, Hamlet forcing Claudius to drink the poisoned wine, and some as-yet-to-be-revealed fate for the madman currently leading the Hermit Kingdom and his counterpart in the United States. We don’t know what exactly will befall Trump, but it’s fairly clear that James Comey is his Macduff and that we’re now in the fourth act of the tragedy that began in November 2016.

Moreover, as with any tragedy that has not yet offered up its catharsis, we feel morally exhausted. In the first 100 days of Trump's reign, there have been many legitimate comparisons between the multiple investigations underway and Nixon's Saturday Night Massacre. Though, as The Daily Beast's John Avalon puts it, comparing the firing of Comey to that of Archibald Cox is a bad analogy, given that “Trump is making Nixon look like a paragon of virtue.”

As much as we may want to see a meaningful historical parallel between Russiagate and Watergate, Jeffrey Frank points out an even more essential difference between the two:

The situation today is far more problematic and dangerous than the one facing the nation forty-four years ago. Nixon, for all his misdeeds, understood the Presidency, and the demands of his job. He was fascinated by history, and the geopolitics of his world, and understood both. In foreign policy, if he didn’t always act wisely, he acted consistently; it’s inconceivable that he would have found himself in the incoherent foreign-policy muddle in which Trump has put himself in the case of North Korea, with its threatening nuclear stockpile, and South Korea, which has just elected a new leader who doesn’t want a war.

Inconceivable and perhaps inexplicable, unless we bear in mind Trump's essential madness—how he “had grown enraged by the Russia investigation . . . frustrated by his inability to control the mushrooming narrative around Russia. He repeatedly asked aides why the Russia investigation wouldn’t disappear and demanded they speak out for him. He would sometimes scream at television clips about the probe.” According to Politico this was the reason for Comey being fired in “another sudden turn for an administration that has fired its acting attorney general, national security adviser and now its FBI director, who Trump had praised until recent weeks and even blew a kiss to during a January appearance.”

Aside from the high weirdness of a president blowing his FBI director a kiss during a public appearance, Trump's narcissism and ignorance seems to have gotten the better of him, melting down in a classic Shakespearean fugue of fear, loathing, and paranoia. Kevin Drum at Mother Jones points out that this has shown, yet again, how loyal Trump's court really is:

Trump's advisers are perfectly willing to portray him as an idiot. The Politico story is based on conversations with insiders who were happy to confirm that the Comey firing was all about Russia. This directly contradicts the White House narrative that it was about the fact that everyone had lost confidence in Comey because of the way he mistreated poor Hillary Clinton. Who are these people who work for Trump (?) but are happy to undermine him to the press on a regular basis?

By Tuesday evening, his aides were busy furthering the false message that Comey's firing was a bureaucratic decision that had nothing to do with the Russia investigation. Sarah Huckabee Sanders, the deputy press secretary, even went on Fox News to call for an end to the probes, saying that "It's time to move on and frankly it's time to focus on the things the American people care about." This would be a useful pronouncement if any of it were remotely true.

Unfortunately for Trump, we know two (non-alternative) incontrovertible facts. The Hill reports that The New York Times and CNN (as well as many smaller media outlets) established Comey's firing as having “been in the works since at least last week… Senior officials at the White House and Justice department were working on building a case against Comey since that time… [and] Attorney General Jeff Sessions was asked to come with reasons to oust him.”

We also know that just hours before Comey got the pink slip, CNN learned federal prosecutors had “issued grand jury subpoenas to associates of former National Security Adviser Michael Flynn seeking business records, as part of the ongoing probe of Russian meddling in last year's election.” Both of these facts, added to the potentially egregious, highly partisan, and likely unconstitutional obstruction of justice represented by Comey's firing, have caused over 100 lawmakers to call for an independent investigation.

Those of us interested in Shakespearean madness nod our heads in melancholy agreement. One thing that makes Shakespeare great is how his characters are believable and yet embody certain universal principles. His tragedies, in particular, seem effortlessly plotted but no less interesting for their sense of fatal inevitability. We look to Macbeth, Hamlet, and Lear in order to understand fundamental human flaws, especially in our leaders—how they ascend to power and so often fall as if it couldn't have been any other way; and how destiny, manipulation, and cruelty seem inextricably scripted for them right up to the final act.

Macbeth may think he has destroyed Macduff and everything he holds dear, but this only adds righteous vengeance as a motive. Similarly, Trump thinks he has eliminated the problem by getting rid of Comey. But as Hecate says of Macbeth in Act III, “He shall spurn fate, scorn death, and bear he hopes 'bove wisdom, grace, and fear: And you all know, security is mortals' chiefest enemy.” Trump rides back to his castle, feeling secure that he has taken care of the Russiagate problem, while Chuck Schumer, like Banquo's ghost, whispers in his ear, “Mr. President, with all due respect, you are making a big mistake.”

We look at Macbeth's psychological deterioration and wonder how we might avoid his nemesis by avoiding his hubris. We watch great writers draw from the pages of history and literature to tell us old stories in new ways. And we see the world as a brutal and often tragic stage, where kings destroy themselves with much less grace. So it will be with Trump when Birnam Wood comes to Dunsinane.