Maryland Gov. Martin O'Malley and Texax Gov. Rick Perry stand at opposite ends of the spectrum when it comes to mixing policy with theology. 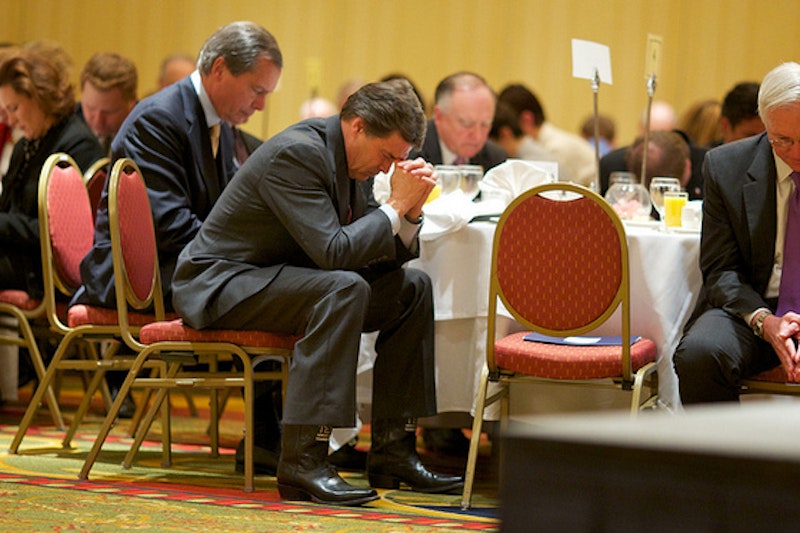 Politicians and theologians rarely see eye to eye on certain matters of law and faith. For the most part they should butt out of each other’s business. Maryland Gov. Martin O’Malley (D) understands that. Texas Gov. Rick Perry (R) doesn’t. When the beatitudes of Jesus, Moses and Mohamed conflict with the laws of Madison, Jefferson and Adams, governors, like it or not, are sworn to uphold the Constitution with a reverent bow to the commandments.

So when O’Malley, a practicing Catholic, declared his epiphany in favor of same-sex marriage, Edwin O’Brien, the archbishop of Baltimore, told the governor of Maryland that sponsoring such legislation would “deeply conflict,” with his faith in very much the same way that Edward Cardinal Egan, archbishop of New York, told Gov. Andrew Cuomo (D) that as a matter of conscience he should refrain from participating in the sacraments over the same issue. (Cuomo’s status is compounded by the fact that he is divorced and living in what the church calls “concubinage” with Food TV Network diva Sandra Lee.)

In an exchange of widely-published letters, O’Malley wrote to Archbishop O’Brien: “As a free and diverse people of many faiths, we choose to be governed under the law by certain fundamental principles or beliefs, among them ‘equal protection of the law’ for every individual and the free exercise of religion without government intervention. Other states have found a way to protect both these rights, so should Maryland.”

Perry, of Texas, a Methodist who embraces creationism and intelligent design, views matters differently and with little distinction in a theocratic blurring of the flag and the Bible. Hear his words, reported in The Washington Post, and the two symbols sound virtually one and the same: “Father, our heart breaks for America, we see discord at home, we see fear in the marketplace, we see anger in the halls of government. As a nation, we have forgotten who made us, who protects us, who blesses us, and for that we cry out for forgiveness.” Great politics, terrible theology, even worse governance.

The occasion was a Christian revival—called “The Response”—organized by Perry in Houston that attracted 20,000 to 30,000 Christian conservatives, depending on who’s head-count is accepted. The event was described as non-political, but the imagery was unmistakable. Perry is now a GOP candidate for president and God is his running-mate. The revival, in disguise, was a silent down payment and handshake with the religious right which is the heart and the pocketbook of today’s Republican party. Religion has suddenly assumed a forward role in GOP politics. Two candidates, Mitt Romney and Jon Huntsman, are Mormons, and at least two contenders, Perry and Rep. Michele Bachmann R-Minn), are avowed Christian conservatives, a faction that is highly suspicious and critical of Mormons. Tim Pawlenty, whose candidacy really doesn’t matter, likes to boast of his conversion from Catholicism to evangelical Protestantism. Whoever can resonate with and rally the GOP’s religious right will emerge from the pack as the party’s leading candidate. Perry, a former Eagle Scout and Air Force pilot, is a prime candidate.

The difference between O’Malley and Perry spans more than their religions but involves their deepest convictions about the powers as well as the limits of government. Maryland’s governorship is the strongest in the nation because of the state’s executive budget system which gives the governor almost absolute power over spending and the bureaucracy. The Texas governorship is among the weakest in the nation. Most of the power resides with the lieutenant governor who presides over the state legislature. It is no surprise, then, that Perry must occasionally seek Divine intervention to resolve his political problems.

Implicit in O’Malley’s letter to Archbishop O’Brien are the separation of church and state in the words of Christ: “Render to Caesar the things that are Caesar’s, and to God the things that are God’s.” When Jesus uttered those words he was talking about the wall that separates the two, the pluralism upon which the United States is built and the expressed intent of the First Amendment. But Perry comes dangerously close to breaching the divide by appearing to pass off the man-made Wall Street kleptocratic woes of America to the neutral ears of God to solve it in a radical tilt toward theocracy. In an earlier attempt to harness fundamentalist spirit and the anti-Washington zeitgeist, Perry suggested that Texas should secede from the union—the nation he now wants to lead. Perry, once a Texas A&M University cheerleader, called a “yell captain” in the curious patois of Texans.

The fundamentalist cultural and Bible-belt beliefs in Texas have been shaped, in part, by a broadcast operation called Radio del Rio, in the sleepy border town of del Rio, whose 75,000 watt transmitters on 300-foot towers were across the border in the Mexican town of Villa Acuna, well out of reach of U.S. broadcast regulations. Its power was later boosted by the Mexican government to 500,000 watts and its spew of Biblical preachments and snake-oil bigotry were heard not only across Texas but throughout the Southwest. (Disclosure: As a U.S. Navy musician stationed in Corpus Christi, Texas, I listened to Radio del Rio regularly.)

The civil but authoritative tone of the exchange between O’Malley and O’Brien—the lyricism is worth the writing—to the deliver-us-from-evil incantation of Perry is noteworthy: “Maryland is not New York,” the archbishop wrote to the governor. “We urge you not to allow your role as leader of our state to be used in allowing the debate surrounding the definition of marriage to be determined by mere political expediency. The people of Maryland deserve no less.” O’Malley responded that “when shortcomings in our laws bring about a result that is unjust, I have a public obligation to try to change that injustice.”

Purists and religionists would argue that there is no such elastic social guidebook as “contemporary community standards,” only the immutable and absolute laws of God and nature. And from both devolve natural law which, in the conservative view, should govern the conduct of man and be the basis of the social contract. But in today’s world of fast-food morals and mores, the only absolute that seems to exist is a brand of vodka.

The coda to O’Malley’s position on the law and the issue of same-sex marriage is the disclosure of new census figures that show the Washington region, including Maryland and Virginia, now has a high concentration of same-sex couples. The new figures reveal that 17,000 same-sex couples now live in Maryland, a 51 percent increase over the census of a decade ago. The District of Columbia, and six states, have legalized same-sex marriage, and Maryland recognizes same-sex marriages performed in other states as legally binding contracts that must be recognized by the state.

As for Perry, he declared at his revival that God’s agenda “is not a political agenda, his agenda is a salvation agenda… He is a wise, wise God, and he’s wise enough not to be affiliated with any political party.” To wit: God is on the side of the political party with the best get-out-the-vote operation.