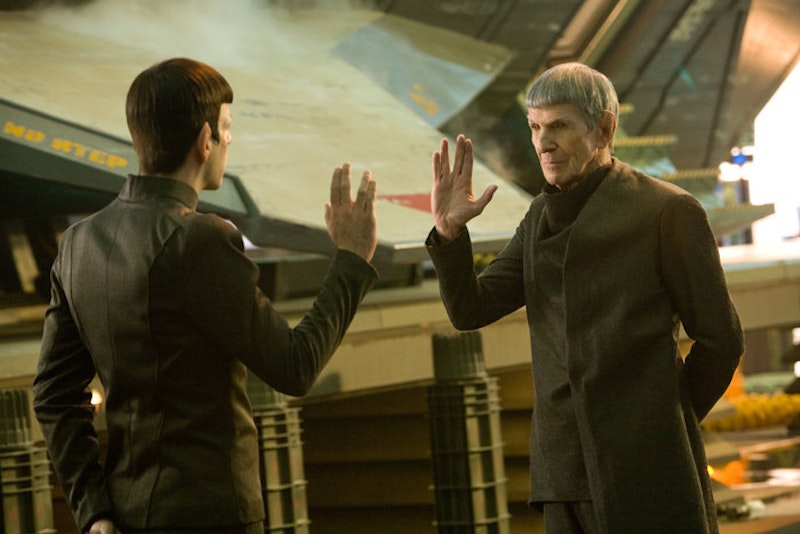 The one obvious way to make sense of the two mangled Star Trek timelines is to assume Spock is evil, or at least cold-bloodedly Machiavellian, which seems plausible.

Background for non-nerds: long story short, there’s an original Star Trek timeline (the one with Patrick Stewart in it, as Deadpool might say) familiar from TV shows and movies with William Shatner in them. In that timeline, Spock purportedly toiled in vain for decades to bring peace between his home planet of Vulcan and its more warlike sister planet, Romulus. In the end, though, as seen in the 2009 J.J. Abrams-directed reboot film Star Trek, Spock failed and indeed accidentally blew up Romulus.

A vengeful Romulan punished Spock by traveling back in time—into a new, Abrams-helmed timeline—and blew up Vulcan. This means there’s the original timeline in which Romulus is dead and the new timeline in which Vulcan is dead. Spock brought death to one planet in each universe. He’s the biggest, most tragic failure in the history of science fiction.

Unless this is exactly what he had planned.

What if Spock, finally despairing of ever bringing about peace, really did let Romulus be destroyed, as that vengeful Romulan alleged, and foresaw the likelihood of Vulcan (in the new timeline) being destroyed as well? Convinced there could never be peace, Spock may have made the cold calculation that when it comes to these two planets, “You gotta keep ’em separated.”

Assuming Spock still meant well on some level, he must’ve foreseen universe-wrecking carnage between Vulcan and Romulus unless he took drastic measures. He acquired some spacetime-bending “red matter,” and the rest is, so to speak, history. Of course, if the young Spock (played by Zachary Quinto) ever finds out that his older self planned the destruction of Vulcan (and thus the death of Spock’s mom), young Spock is going to have quite an existential crisis, wondering if he is himself destined (in the new timeline) to become a cold, calculating quasi-villain.

As he looks around at the more Romulan-influenced galaxy he now inhabits—and the more imperial, warlike system into which the Federation must now evolve to counter the increased Romulan threat—young Spock may well grow a bit aloof, cynical, and disenchanted. I think he may even grow a goatee in this strange “mirror universe” that his older self and J.J. Abrams have created. Kirk may in turn become more coldly strategic himself, killing foes from afar with a stealthy weapon such as the Tantalus field.

It all sounds a bit dark, as befits movies and TV these days. But someday fans deserve to see the narrative turn back to the original timeline—the real timeline—perhaps showing us what becomes of the friendly, familiar Federation in the 25th century and beyond. In that timeline, Romulus will continue to be mourned—like Leonard Nimoy and the just-deceased Star Trek actor Anton Yelchin—but we fans will know that for good or ill, the devastation was all part of Spock’s desperate plan.