Specter of the Gun

Violent distortions of the historical record. 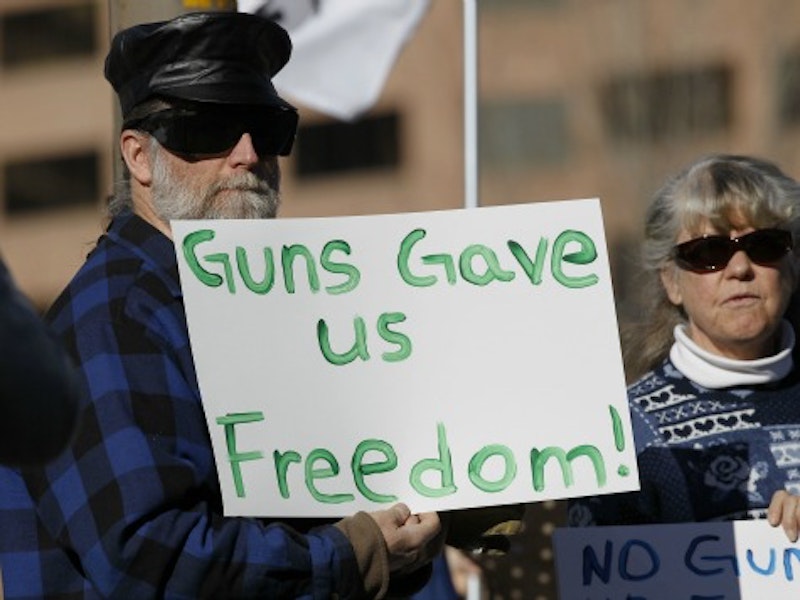 The fighting over history gets more intense when that history contains fighting.

Historian Andrew Bacevich is so taken with the bird’s-eye view on the evils of American Empire that when he recently reviewed Alexander Rose’s great soldier’s-point-of-view history of battles book Men of War, he was so irked by Rose’s failure to examine other battles such as Fallujah that he asked, “Bunker Hill—does anyone outside Boston really care what happened there?” Bizarre. Just a century or so earlier, we might even call it callous.

I also think there was something more callous about the people who criticized Jim Webb for his mild pride over felling a man in battle than in Webb himself. Webb came across as at worst a psychologically normal and at best a heroic individual who’d survived a life-or-death ordeal and apparently saved others in the process. Naturally, he’s now gone from the presidential race, surrendering the field to the real psychopaths.

And what do we make of people piling on Ben Carson for wishing the Jews had more guns prior to World War II? How pacifist are we expected to be now that that’s not regarded as an eminently humane wish? The Nazis really did disarm the Jews prior to the war so that they couldn’t periodically harry the Nazis while being herded into ghettos and camps. You can read the contemporary American newspaper accounts. Yet we’re supposed to be horrified by the idea of trying to keep guns in potential victims’ hands (whether the potential victims are those Jews, the blacks who were disarmed at the behest of the Klan in the earliest days of U.S. gun control, or just the recent victims of mass shooters who have reportedly sought out “gun-free zones” as targets time and time again).

You’ll even find arguments recently that since the Jews couldn’t have won, it’s best they weren’t better armed, as if just a few more escapees, slightly better deterrence, or a few more strikes against the Nazi death machine count for nothing, well, nothing compared to the importance of the present-day push for gun control, in any case. Here’s hoping the leftists are all delighted by the way cops behave if the day ever comes when only the cops have guns. I just watched another in the endless series of videos of cops shooting pet dogs for no reason and have my doubts about who exactly we should be trying to disarm.

The controversial libertarian commentator Christopher Cantwell notes, a la Jonathan Swift’s “A Modest Proposal,” that if anti-gun activists really think the probability of gun owners behaving badly is unacceptably high, they may all have to become racists, since the odds of any of the nation’s 100 million or so gun owners committing murder is so low that the rate of black males in general committing murder is higher.

He’s not saying we should start regulating or monitoring people just for being black and male—everyone recognizes that would be offensive and insane, I think—but rather that statistically speaking, believe it or not, it is even more insane to target gun owners as a class. Gun owners as class aren’t that dangerous (at least not compared to black males as a class). Yet we are urged constantly to manage all gun owners more strictly.

Speaking of armed deterrence, Donald Trump continues to provide almost enough amusement to make up for the horror of watching him make his way toward the Oval Office. The ease with which he turned the entire post-9/11 “Thank you, Mr. President” narrative, a decade and a half in the making, on its head in an instant, delighting even a vast portion of Republicans with his near-Truther insults against the CIA and George W. Bush’s defense capabilities, is truly amazing.

It speaks less to Trump’s genius, though, than to how fragile all the usual phony-baloney political narratives really are. All it takes is someone well-positioned saying so. The establishment has been honing its tales of brilliant generals, decisive presidents, noble pacifists, and dangerous armed rednecks for decades—but maybe no one believes a word of it. We’re all beginning to realize that many other people were just nodding and smiling politely through the mainstream nonsense just like us.