Time for a Polar Bear Party 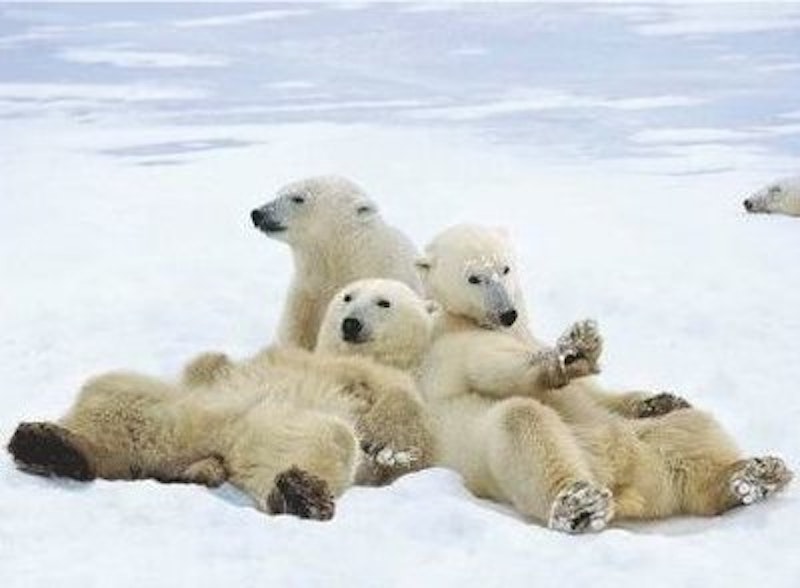 Since this summer, I’ve watched the voyage of the Shell Oil rig, The Noble Discoverer as it makes its way to the Arctic. Along with millions of people around the world, I wrote to President Obama, asking him to reverse his approval of Shell’s offshore drilling. The administration took a lot of flak from environmentalists for that decision. Al Gore called the White House position “insane.” Unlike other locations, the freezing temperatures, narrow drilling window and remote waters would mean an oil spill could be impossible to control. Additionally, no technology exists for cleaning oil from sea ice, which would severely impact Arctic wildlife. Seal and herring populations are still recovering from the devastating Exxon Valdez oil spill of 1989.

The Arctic is in grave danger of disappearing. In the last 30 years, we’ve lost up to three-quarters of the polar ice cap. The volume of that sea ice, measured by satellites, has minimized so quickly that scientists say it is now in a “death spiral.” Its melting is mainly due to humans’ use of fossil fuels. Unfortunately, as climate change melts the ice, companies are moving in to extract the fossil fuels that caused the melting to begin with.

Aside from the threat to humans, animal life is greatly affected. Wildlife photographers and scientists report, for the first time, finding corpses of emaciated polar bears. Polar bears feed on seals that they hunt on sea ice. Seals are rarely on land, and it's even more rare for polar bears to catch seals in the water.

Several weeks ago, Shell announced plans to halt Artic drilling operations and turn back. After investing over $7 billion and nine years of planning, Shell recognized that offshore drilling in the Arctic is risky, costly and not good business. But is that the whole story? Did global widespread resistance force Shell to reconsider their reputation? The massive “Shell No” campaign did help open the political space for presidential candidates Hillary Clinton and Bernie Sanders to speak out in opposition.

The partial restriction imposed by the administration on Shell helped push the company to pull up the drill bit and head home. This month, Obama blocked off the prospects for future oil drilling in the Arctic, imposing new lease conditions that make it practically impossible for companies to hunt for oil in the world’s last great wilderness. The Department of Interior said it was canceling two future auctions of Arctic offshore oil leases in the Chukchi and Beaufort seas, and turned down requests from Shell and other oil companies for more time on their existing leases. For polar bears, it’s a reason to celebrate.