The Big, Long Joke About the 15 Presidential Candidates and the Cable Network 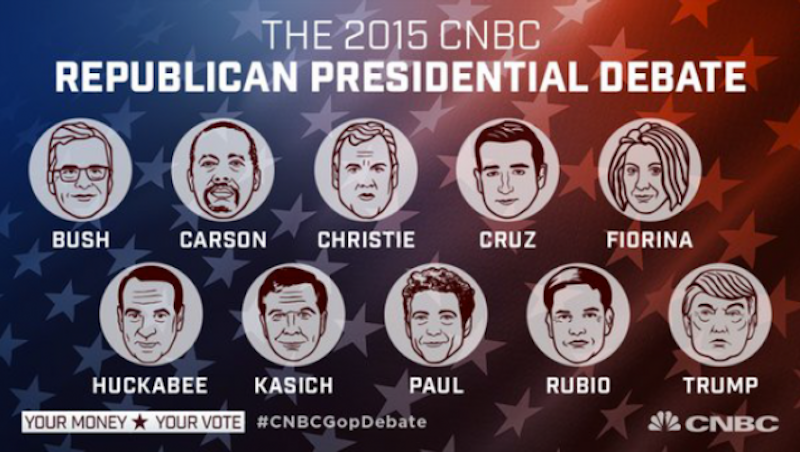 Representatives of the many GOP presidential campaigns took part in a conference call where they discussed a big surprise. The good thing about this is that it sets up a joke. The reason: each representative acted like his or her candidate, the way an Irishman, a Frenchman and a Mexican would act out their nations' alleged characteristics in jokes told when cars had fins. Okay, I won't exaggerate. Several of the reps, not all of them, acted this way. But there were enough for the joke to stagger forward.

All right. The third debate is coming up. Apparently CNBC wants a maximum of airtime showing candidates going at each other or fending off moderators. So it informs the various campaigns there will be no opening or closing statements and that the debate will run for two hours' speaking time plus time for commercials. The campaigns object. The lower-polling candidates want the statements, their only guaranteed chance to look at the camera and say something. The top pollers, Ben Carson and Donald Trump, want the statements too, and they definitely don't want to be trapped on the debate stage for more than two hours. Both men are well into their 60s and neither of them knows too much about policy. They want to get their airtime and get out.

Reportedly, CNBC's memo refers to the format rules as if all the campaigns have agreed to them. The campaigns are pretty sure the rules haven't been mentioned before, so they're ticked. Worse, most of the campaigns can't do all that much. Trump and Carson bring in viewers, so the two of them have clout with the networks: no Trump or Carson, and ratings go down. The low-polling candidates, by contrast, bring in nothing. They're being put on the air as a civic duty. Of course, each of them figures he or she is on deck as leader of the free world, but in the meantime reality doesn't cooperate.

Now the conference call. The Republican National Committee figures it had better find out what everybody wants. It gets all the campaigns on the same line and asks what they will not accept, their red lines. And the Rand Paul guy acts like a twerp (“CNBC can go fuck themselves”), the guy for Lindsey Graham makes a silly joke (Lindsey would sub for anybody pulling out of the big boys' debate), the Chris Christie guy behaves in a way that is sort of paranoid and gangland (instead of giving his opinion, Politico says, Christie's guy “expressed worry about stating his position on an open conference call line, saying that it could expose his campaign to leaks”). And the Trump guy dictates terms. In fact the Trump guy puts those terms over. He and Carson's guy band together, and by the next day CNBC gives in. The debate will include opening and closing statements, and it will go off the air exactly two hours after it goes on.

I suppose, for the sake of the joke, the Christie fellow should’ve bellowed and confronted, since that's his boss' trademark. But Christie has an endless enemies mentality, so I see a match with his fellow's paranoia—I mean, getting worked up about somebody maybe listening in when all his rivals were already there, taking part in the conversation. As for Lindsey Graham, his sense of humor has always bothered me, so I call another match. The Rand Paul and Donald Trump match-ups work just fine, of course.

Here are two I left out because their contrast demands special attention. Marco Rubio and Jeb Bush had their guys on the call too. Bear in mind that Rubio and Bush are two candidates of the establishment. Basically, Bush is anointed, and Rubio is scraping the ointment off him and spreading it on himself. But no one else is going to get that ointment, just these two. Out of a flock of would-be presidents, Bush and Rubio are the candidates that the big men of the Republican Party, the grandees and the major donors, look on as being like real presidents.

But when it comes to CNBC, neither man can do any leading. Unlike Trump and Carson, Rubio and Bush are nowhere in the polls and bring in no viewers. Thus, they have no clout with the network. On the other hand, they do have the favor of the party establishment, meaning they can't wild out like a Ted Cruz– or Rand Paul–style and act like they have nothing to lose. They're not going to walk out on a debate, no matter what CNBC does to the format. The two men are helpless in the situation, but they have to hang around and hope that somehow they come off as presidents.

With that in mind, here is the behavior of the Bush rep and the Rubio rep at the big conference call. Let Politico carry the story: “Then it was Marco Rubio campaign manager Terry Sullivan’s turn. Rubio would be present at the debate—he’d be in Boulder 'hell or high water,' regardless of the final decision, but he wanted the campaigns to speak with one voice and agreed with other campaigns on the need for opening and closing statements.” Rubio's man will do nothing about CNBC, but he sticks out his chest and makes rooty-toot fanfare noises while announcing this fact.

Now Jeb, again in Politico language: “Peter Flaherty, an adviser to Jeb Bush, voiced his position—that the former Florida governor intended to participate in the debate no matter what, but that he’d like there to be opening and closing statements.” You know, if it's no trouble.