The occupation of Wall Street has been a great party, but the 99% can't seem to get their message straight. 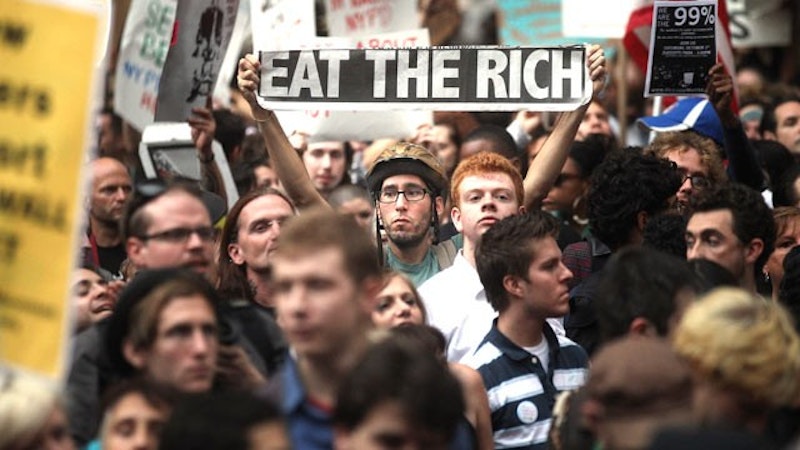 It’s clear that a sizable percentage of the protesters who are symbolically “Occupying Wall Street,” mostly in Manhattan, but now in other cities across the country, are smart and sincere—also maybe broke and unemployed—in their desire to effect some sort of change in America’s currently hobbled, perhaps dysfunctional, economic system. That scores of their comrades are along for the swell ride—it’s a carnival to some, a chance to party with friends and Tweet about the scene, maybe get lucky with a cool guy or chick—is also understandable, for events like this don’t present themselves with any sort of regularity. And now that Big Labor is getting into the act, as The New York Times reports, we’ll see if that’s a plus or minus for the original organizers. (You know that a number of future politicians, lawyers and corporate “sell-outs” will emerge from this series of protests, in the Tom Hayden/Jerry Rubin vein.) That Occupy Wall Street is America’s rendition of the “Arab Spring,” as some (inevitably academics and liberal “big thinkers”) are claiming, strikes me as rather offensive—I’ve yet to read of any deaths in this country’s smattering of hoedowns—but protest, huge or small, invites hyperbole.

And there’s also the humorous side. “Occupy Baltimore” began on Oct. 4, as a couple of hundred citizens rallied at the city’s prime tourist attraction, the Inner Harbor, and though there wasn’t much to write about, I did get a chuckle from the concluding line in Edward Ericson’s blogpost the next day, which appeared online in the weekly City Paper. An observer noticed a woman at McKeldin Square and wanted a closer look at the slogan on her t-shirt. It read: “Touch me and you die. I’m only here to dance.”

When the Manhattan action began a few weeks ago protesters claimed that the media was blacking out their congregation—conspiracy! Fox News! The Man! Corporate censorship!—but soon enough, after hundreds were arrested the mainstream media fell in line and devoted space to the ruckus, if only because it was a story idea right under their noses. Yet, just like the relative incoherence of the protesters' demands—end the Fed, raise the minimum wage to $20/hr., Eat the Rich, bring back the guillotine for millionaires (sorry, gallows’ humor is hard to avoid here)—the articles I’ve read are short on clarity as well.

For example, 27-year-old Ezra Klein, who blogs prodigiously for The Washington Post and is a proud “progressive,” ran a post on Oct. 4 headlined “Who are the 99 percent?” that was a mess of contradictions. Klein begins, disingenuously in my opinion, by writing: “It’s not the arrests that convinced me that ‘Occupy Wall Street’ was worth covering seriously. Nor was it their press strategy… that couldn’t say what, exactly, it hoped to achieve. It was a Tumblr called “We Are The 99 Percent.” Klein then downplays any anger that the assembled have demonstrated—no “rants against the system” or “calls for revolution” and says that they’re simply telling “small stories of people who played by the rules, did what they were told, and now have nothing to show for it. Or worse, they have tens of thousands in debt to show for it.”

The last time someone evoked the “played by the rules” line it was then-presidential candidate Bill Clinton—hypocritical as usual—excoriating those who got rich in the 1980s during the “greed is good” era, unfairly lumping hard-working Americans in the same circle of civic hell as Ivan Boesky. Never mind that his wife Hillary pocketed $100,000 on a $1000 investment, a smart hunch, she said, after reading an item in the Wall Street Journal that later turned out to be a favor from James Blair, one of the Clintons’ financier friends.

Anyhow, as Klein writes, a disproportionate number of the non-rant stories were from students, either graduated or still in college, who’ve racked up enormous student loans and now, in an abysmal economic climate, are at a loss as to how to pay them back. It doesn’t matter that no one forced these young adults to attend college, although it’s true that parents and society at large looks askance at those who don’t, and you’d be someone with a cold, cold heart not to sympathize with their plight. (Or, for that matter, any of the unemployed Americans who dutifully look for jobs or try to make do on downsized salaries.) Yet, is it Wall Street that’s to blame for these onerous debts or the colleges and universities themselves, institutions across the country that are largely recession-proof, which is evidenced by their ongoing hikes in tuition that far outpace inflation? Maybe this nascent movement ought to be called “Occupy NYU” or “Occupy Vanderbilt University.”

Furthermore, Klein muddies his article by stating upfront, “Let’s be clear. This isn’t really the 99 percent. If you’re in the 85th percentile, for instance… you’re probably doing okay.” Yet, Klein’s conclusion flips his earlier contention: “It’s not that 99 percent of Americans want a revolution. It’s that 99 percent of Americans sense that the fundamental bargain of our economy—work hard, play by the rules, get ahead—has been broken, and they want see it restored."

That’s confusing. Now if even a fraction of Klein’s aggrieved 99 percent participated in this Occupy Wall Street extravaganza, that’d really be something, along the lines of the Hoovervilles set up across the country after the Great Depression started.

Yet if Klein’s trying to get his bearings straight about Occupy Wall Street and its off-shoots, that’s okay since he’s a journalist and is doing his job figuring out a fast-moving story. What I really object to is when celebrities get into the act. No story was more stomach-turning than actor Mark Ruffalo’s article in the Guardian on Oct. 2. Now, it’s possible that Ruffalo, who’s appeared in many blockbuster films, works pro bono, but I doubt it. So when he claims that he’s part of the downtrodden, the 99 percent, it rings of cashing in on what he must consider a chic movement.

Ruffalo also calls for elimination of “money in the political process.” Come again? Maybe Mr. Mark ought to have a sit-down with the men and women who pay his salary, and contribute heavily to (mostly) Democratic candidates and give them a piece of his mind. After that, he probably would be one of the 99 percent.