Is Civility Really That Hard?

Face The Nation reminds us how TV news is supposed to be done. 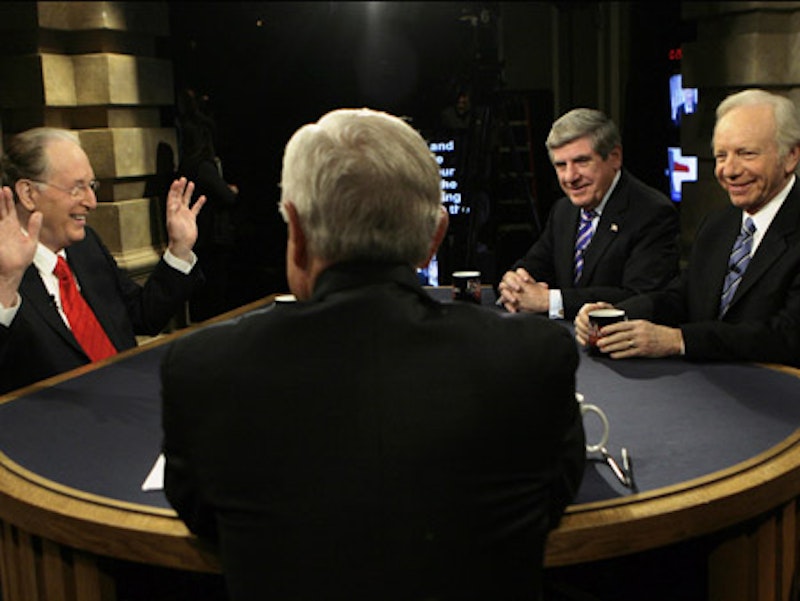 I watch CBS’ Face the Nation when I can—10:30 a.m. on a Sunday is tough—but every time it’s worthwhile. It’s a colonic for the glossy superficiality and opaque rhetoric of corn-fed infotainment, a rare bastion of rationality in a sea of dense garbage. It’s not exactly relevant or timely post-Internet, but Sunday morning programming is one of the last places to get relatively level-headed political coverage on TV. Evasive politicians and stale content aside, the production values are what every news producer ought to strive for: its presentation, tone, and candor is perfectly in line with what a news show should be: dignified, stately, compassionate, and straightforward. There are no Twitter polls or video game CGI, or token airhead bimbos or moronic pundits—all that nonsense clouds what news should be, and that’s people talking (intelligently).

With so many scummy opportunists and charlatans anchoring news programs these days, watching Bob Schieffer send off his colleague Andy Rooney was surprisingly touching. Schieffer is one of the best people on TV, and he embodies all that is lost on the media today—articulate, not a pussy, honest, funny, and warm in a grandfatherly way. He’s of the old world, his voice recalling 1940s and 50s newsreels that confound kids today. There’s something to be said for the responsible and compassionate newsman—I’d give Schieffer and Rooney a hug if I ever met them. I don’t feel anything for Brian Williams, Katie Couric, Chris Matthews, Rachel Maddow, Wolf Blitzer, Anderson Cooper, Bill O’Reilly, et al. – it’s hard to take anybody seriously behind a $400 haircut and multimedia whoring. I don’t want to know what these people think or what they have to say—I don’t trust them. Cooper is probably a good guy, but his cartoonish and nauseatingly glitzy and vapid shows wash out any credibility he could’ve had.

I don’t think it’s too much to ask for respectable news anchors and hosts. Cable news is so entrenched in the idea of celebrity that finding a show that doesn’t make you reach for the revolver is really tough. Things aren’t going to get better, and there probably won’t be good TV news for a long, long time, if ever. Rooney’s retirement is simply a notch in the fall of the Old World, a decline that will be complete once print dies for real. Amongst the morass of awful television, it’s sad to see such an appropriate format dying, and even sadder watching the last stalwarts of reason and rationality wither away. I feel like I’m on all sorts of drugs when I watch TV, and the tepid speedball of information and entertainment only makes it easier for people to tune out.