Unless I’m very much mistaken. 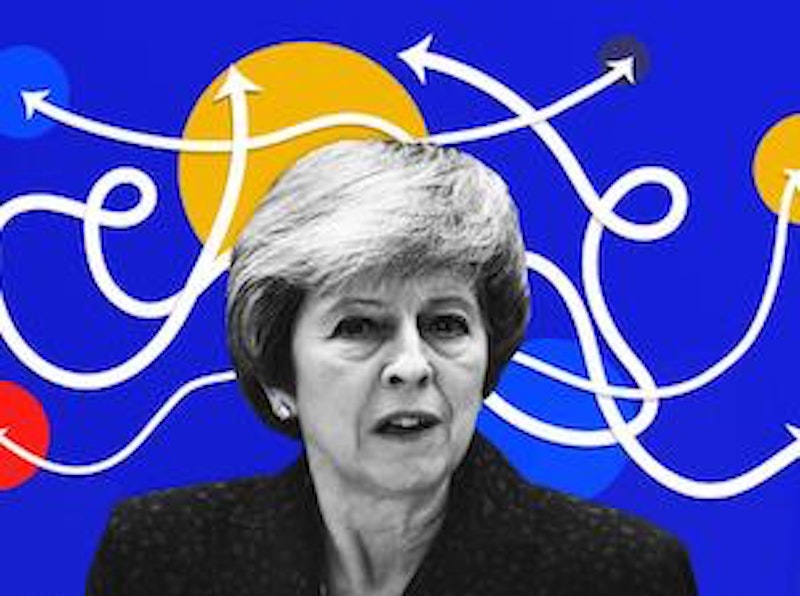 Editor's note: In a plagiarism of The New York Times' philosophy blog The Stone, this article inaugurates a new series for Splice Today, in which we invite the world's deepest thinkers to solve the world's biggest problems using history's most profound ideas. If we do say so, it's about time, and good luck to us all.

Philosophy—the noble human quest for wisdom that began when Socrates ended—has shed its darkness on many matters. Too rarely, however, are philosophers called upon to apply our supreme reasoning facilities to practical difficulties. Hence, I'm going to have a go at Brexit, in the justified true belief that philosophy can help bring us deeper into the obscurities and deliver an apparently rational answer to a bewildered British people and, in particular, to a tormented Theresa May.

Now, whether Great Britain is part of Europe depends on what you mean by "part" as well as what you mean by "Europe," an insight for which you will thank me later, or not, just as you please. Let us address these in order.

We must begin by assaying the quandary of whether Great Britain is geographically part of Europe, deploying the provisional hypothesis that political arrangements reflect physical realities. This is something that Europeans—whoever that might be—have wondered about since Caesar invaded Britannia, or didn’t, and it has never been resolved to anyone's satisfaction whether Great Britain is physically part of Europe or not. On a map, Great Britain appears to be a very large island off the coast of Europe proper, though it’s undeniable that it’s near Europe. But how near to x does y have to be to be part of it? And if we are distinguishing Great Britain at the outset from "Europe proper," haven't we already answered our own question? Only if we understand the meaning of "proper." For that, you’ll have to await my next book.

Many Remainers think of Great Britain as obviously part of Europe. They think of British civilization, if any, as European civilization. It's not very like Italian civilization, however, though assessing the degree of their similarity would require enumerating all the properties that each possesses—for example, in their art, fashion, and cuisine—and developing a system for weighting the intersections. It’s worth remarking, however, that if you were flying to London from New York, you wouldn’t naturally say that you were headed to Europe, though if you were traveling to Paris, Pisa, or Prague, you certainly would. Perhaps this indicates that in common American usage Great Britain is partly or provisionally distinguished from Europe for some purposes. This is a fundamental insight to which we shall return, or perhaps not. As many thinkers have observed, there is water between Great Britain and Europe. But this water is not an ocean; rather, it is a "channel." That situation raises, acutely, the question of what a channel is, and what sorts of entities is it capable of dividing. I'll have to write you a promissory note on that one.

Unless I’m very much mistaken, these prolegomena have exacerbated many key elements of the problem. Having assayed the basic geographical situation, I propose now to address Brexit systematically from the point of view of mereology: the science or logic of the part-whole relation. You might not have thought that there was such a science, but then again you might have been quite fatuous. What is a part of what, and how, and of what sort, and so on: these questions present many logical difficulties. We can all be grateful, then, that logicians have addressed them with apparent precision.

The question arises, then, whether Great Britain is part of Europe in one of these senses, or in any of a dozen others that might be enumerated. The second question is whether it ought to be. And so on.

Now it's obvious even from this brief survey that what sorts of parts a thing has or can have depends on what sort of thing it is. A mug, for example, can't have detached or gerrymandered parts, unless I'm wrong about that. Europe is often referred to as "the continent," and I suggest that this is the relevant sortal. A "continent" is in turn defined as a member of the group of earth's largest contiguous landmasses. However, Europe appears to be contiguous with Asia, so whatever either of those things are, it’s not a continent. Whether Great Britain is part of Eurasia appears to be a somewhat different question than whether it is part of Europe—much less whether it ought to be—perhaps because Europe is, in fact, organized by conceptual gerrymandering; that is, Europe is immaterial or arbitrarily demarcated. This is one way into the fundamental insight that no one—and least of all Europeans—has any idea what Europe is, or where it starts and leaves off. We'll need to answer that question before we can proceed.

Perhaps Europe is not a continent but rather, as many have observed, an idea. Great Britain, on the other hand, is an island, and it appears that islands cannot be parts of ideas. For example, the idea of Europe can exist in its entirety in any particular person's mind, but you can't fit Great Britain's 93,628 square miles of varied terrain into anyone's head, though you could try. You may well reply that Great Britain itself is an idea, but it definitely didn't look that way to me when I visited in the early 1980s; at that time, Great Britain appeared to be a physical environment consisting of such things as dirt and hills and people and buildings, rather than a purely mental phenomenon. This might well have shifted in the interim, I admit.

Thus we can conclude beyond quibble that, if Europe is an idea, Great Britain cannot be part of it, no matter what agreement is concluded between them, or if none is. The question of the United Kingdom's joining the European Union can, hence, never have arisen at all, so it’s impossible for it to withdraw, no matter what approach Theresa May might take.

Spent from the labor of conceptual clarification and a bad head cold, I'm off to bed, as the night of philosophy and history falls upon us all, or at least upon the very idea of Great Britain and the so-called continent of Europe. There's no need to express your gratitude, Theresa; qua philosophy professor, this is just what I do. The above is a mere sketch or application. If someone wants to make me a grant or agent my book, I'll continue this disquisition when I arise, if I do. Or you could pay me to stop.

—Crispin Sartwell is assistant under-professor of philosophy at Dickinson College.