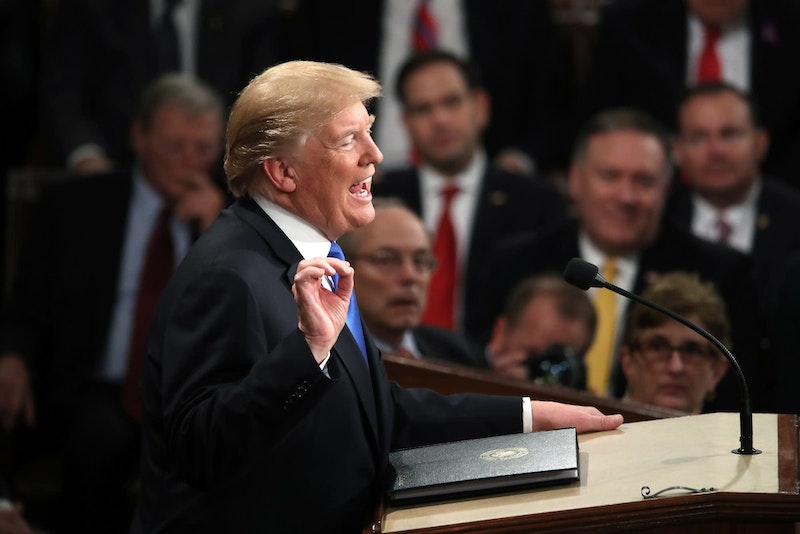 In the weeks after Donald Trump’s election, I took part in the following exchange with Russ Smith, proprietor of this site. Russ: “Don’t worry, two years from now the Dems will take Congress in a landslide.” Me: “I just hope there’s an election two years from now.” I wasn’t trying to be dramatic. I was just terrified.

Now we’ve survived two years of Trump. The federal government is crippled for the indefinite future. The President may or may not be permitted to give Congress his State of the Union address. If he does give it, maybe he’ll announce that the Union’s state is lousy. He’d have a point. America’s no longer a stable country. But wait, it’s kind of stable. It’s largely stable. The midterms got held and the votes (in most cases) were counted. The swimming pool has kept its shape; we haven’t been dropped in mid-ocean.

A couple of years ago I thought maybe we had been. This was during the bleak, high-pitched November of Trump winning his 45 percent. I watched Jaws on a friend’s couch and it hit me: democracy’s boat was about to be eaten. Now it’s un-hit me, a process that began with the Women’s March and settled in as I watched Trump in power. Trump’s a devouring monster, but not the same sort as Jaws. A giant killer shark is a living machine for attacking and destroying. Trump is more of a sack attached to arms and topped by a mouth. He’s driven to take and grab, but he’s not especially good at it. He’s not equipped. His optimum devouring comes when things are handed to him, preferably on trays; consider Big Macs.

“No shark,” hisses the tousle-haired slave girl. “No lion. Not even wolf. You, you are jackal.” Yes, as carnivores go, the nation’s boss is something of a scavenger. But his gummy jaws are still planted on the national throat. That this lazy fool managed to get them there indicates the larger trouble we’re in. The cross-eyed, knock-kneed gazelle that’s the American polity must have been wobbling very low. It sure felt that way at the time. It still does. On the other hand, we just saw a president suggest ruling by emergency powers and then back down and dither like a chump. We saw a president beat the drums about the scary foreign menace ready to invade us—the caravan—and then we saw everybody vote for Nancy Pelosi.

Our potential dictator may yet stumble into a chance that even he can’t fumble. In the meantime, the country’s biggest problem is this: having promised his fans a border wall, Trump has to settle for a shutdown. His fans thought he could shake the money out of Mexico. No, he can’t. He can’t shake it from Congress either. The money has to be handed to him, and the Democrats decline to do the handing. Trump has to satisfy his rally crowds with second-best, meaning the shutdown itself.

The longer the federal government remains shut, the more he has to brag about: look how long he fought, look how D.C. suffered, look how big it is—“Broke all the records, folks.” Of course, his fans may be in less of a mood to listen, given that they, like everybody, need the government. But thinking ahead isn’t a big trait these days. For now the people’s government has been disabled because a former TV star needs material for his crowds. That doesn’t sound like a stable country. At best it’s fairly stable.