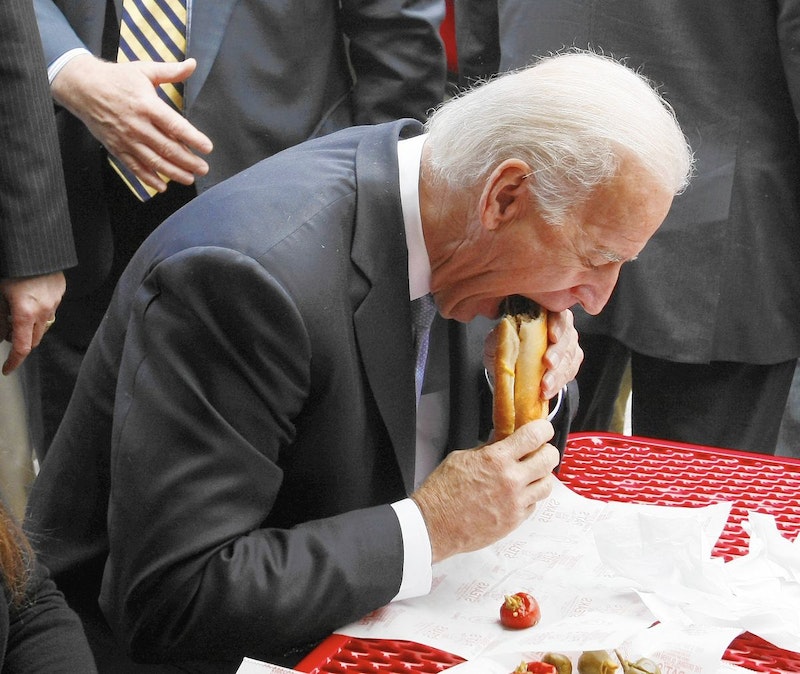 Just a thought, but it’s possible a trio of New York Times reporters—Michael D. Shear, Katie Rogers and Annie Karni—prepped for an average-length article (why three staffers were necessary is anyone’s guess, but their paper apparently has money to burn, except for copy editors and a research staff) that was mostly puffery for Joe Biden by setting aside some quality time to watch the lousy 2000 movie The Contender. In that film, Jeff Bridges plays outwardly amiable American president Jackson Evans, and spends half his screen time cajoling guests to try the culinary delights that his chef whips up in a jiffy. The fictional Evans, like Biden as readers learn, is a back-slapper in public, but has a “short fuse,” that the only the strongest of aides can abide.

The reporters, who claim they interviewed “more than two dozen” past and current Biden associates, feign even-handedness early on by saying that the President works on his own timetable and sometimes procrastinates on policy pronouncements, such as scolding Vladimir Putin for election interference or assembling a coherent immigration policy, particularly at the Southern border. That out of the way, it’s Hail to the Chief!

This is a choice paragraph: “Quick-decision making is not Mr. Biden’s style. His reputation as a plain-speaking politician hides a more complicated truth. Before making up his mind, the president demands hours of detail-laden debate from scores of policy experts, taking everyone around him on what some in the West Wing refer to as his Socratic ‘journey’ before arriving at a conclusion.”

As is often said on Twitter (which Biden mostly skips—except to tell Americans they’ll be “allowed” to have mostly-normal July 4th barbecues and other celebrations—at least according to the Times), Socrates would like a word.

I’ve no interest in making fun of Biden for his obvious cognitive difficulties—and if they’re apparent in public, when his present-day Dr. Robert shoots him up with God knows what so he can stay focused, and is still an apparition, imagine him in private meetings or on walks with his German shepherds Champ and Major—for he’s 78, in unknown health (though he claims, contradicting an early 2020 campaign pledge, that he’ll run again in 2024) and has a history of medical problems. The notion that Biden is alert for intense, details-laden conversations that last hours is hard to believe. More likely, after 45 minutes, he’s half-seriously calling out for a tumbler of hemlock.

It gets better: “Mr. Biden is usually back in the residence by 7 p.m. for dinner with the first lady. The president likes pasta with red sauce [no meatballs or sausage?], while the first lady prefers grilled chicken or fish. Christopher Freeman, a caterer who worked for them as much as three times a week when the Bidens lived in the vice president’s residence, said that Mr. Biden ‘eschews alcohol,’ but that Dr. Biden was ‘an oenophile of the first degree’ [Good to know!]. In the vice president’s residence, the staff was instructed to keep the kitchen stocked with vanilla chocolate chip Haagen-Dazs ice cream, Special K cereal, one bunch of red grapes, sliced cheese, six eggs, sliced bread, one tomato from the garden, and at least two apples on hand at all times, according to a preference they kept at the home. Mr. Biden’s drink of choice: Orange Gatorade.”

There’s no reason to believe the three Times reporters fabricated the above, but in the past—but not in the current Times-as-de-facto-DNC-newsletter—one would imagine they’d be fairly embarrassed jotting down (and recording) product placement minutiae of the President’s and his oenophile wife’s culinary habits. It was boilerplate “Style” section “word salad” to me (although all I remember reading about Donald Trump’s diet was his addiction to McDonald’s, and that wasn’t presented in a “folksy” way, but as a danger to the children raised in Hillary Clinton’s Village) but I’m sure Gatorade and Hagen-Dazs were thrilled.

Taki wrote a goofy, but funny, column recently about “The Man in the White Suit” who eventually nabs each one of us. The 84-year-old Spectator “High Life” luminary (who jokes that he was born in 490 BC), chides Mick Jagger (“grand old age of 112”) for living so long instead of dying young and pretty, and Paul McCartney too—“unbelievable [he’s] made it to 121.” Never mind that Sirs Jagger and McCartney undoubtedly have 12 physicians and nutritionists on call at all times. Sometimes, money can buy you extended longevity.

But I’ll put the jokes on the shelf and express my befuddlement that so many people—of all ages—are hyperventilating about elderly rock stars, specifically Van Morrison (75) and Eric Clapton (76), who aren’t following the science and released an anti-lockdown, anti-mask song “Stand and Deliver” several months ago. I gave up on the music of both (former) icons decades ago—Morrison after his collaboration with The Band on “4% Pantomime” and Clapton’s been off my radar since the brilliant Derek and the Dominos double-LP in 1970. (Though I liked his “Sign Language” in 1976, even if Bob Dylan carried the song.)

What I don’t get is onetime fans now discarding their discographies (or whatever current format) of Morrison’s work with Them and his Astral Weeks and Moondance. I never liked Clapton as much, but his stints with the Yardbirds, Cream and Blind Faith were/are memorable. If they want to get political—just as Bruce Springsteen has, to paraphrase Taki, since the Boxer Rebellion—fine by me. I just don’t listen to them anymore.

Not so, naturally, for Joan Baez, now 80, a Kennedy Center honoree who was the subject of 42,000-calorie load of goo from Karen Heller in the May 12 Washington Post. It’s a lengthy love letter to Baez—and one assumes it’ll be called up for her obit when The Man in the White Suit gets her to knock on Heaven’s Door—and exceedingly hard to read.

My sweet Lord, take a gander at this: “Her searing soprano with its trademark vibrato exhausted superlatives. It was declared incomparable yet compared to everything: old gold, the clear autumn air. It was deemed a line straight to God—staggering, the voice of an enchantress, a sibyl, a siren.”

Baez says her attitude about money is “sketchy,” though that didn’t prevent her from releasing a double-LP, Any Day Now, in 1968, composed exclusively of Dylan songs, which went gold in ’69. Strange, since Dylan humiliated her after their break-up, seen on Dont Look Back in detail.

That contemporary Joni Mitchell is superior in every way to Baez—she could write, took musical chances and didn’t particularly care about alienating a once-huge audience—isn’t even all that relevant, although Baez never composed a single song that was worthy of Mitchell’s collection. Baez was a beautiful young woman when she exploded onto the folk scene in 1960 or so, and that “voice” did mesmerize many, including my oldest brother who saw Baez at a New England show in 1961. (I wrote about Baez’s very weird iconic status two years ago.) Yet even as a kid, that “searing soprano” was, to me, like Switchblade Johnny running across the blackboard of Mrs. Wyman’s first-grade class.