CDC Passes the Buck Once Again 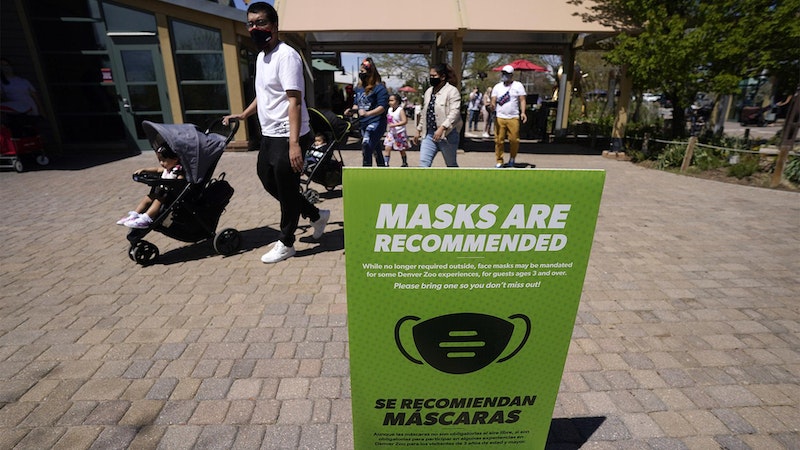 On May 13, a Thursday, the CDC issued new coronavirus guidelines, in part, “that fully vaccinated people do not need to wear masks outdoors and can avoid wearing them indoors in most places, updated guidance the agency said will allow life to begin to return to normal.”

Cases have gone down, the vaccines appear to be working for now, and summer is almost here. “People in state health departments and infectious disease doctors have been saying this for some time because they're so impressed with the effectiveness of the vaccine, and also, they have the feeling that people who are vaccinated need a reward.” That’s according to William Schaffner, a doctor at Vanderbilt University who says he supports the CDC’s new selective no-mask mandate. I think he’d agree with CDC Director Rochelle Walensky: "We followed the science here.”

That may be true, but they ignored, or didn’t care, about the onus this put on business owners and employees of restaurants, grocery stores, movie theaters, bars, and anywhere else where people go inside. What are you going to do at the door, swear on your mother’s life? There’s already been a moronic viral video of Silver Spoons TV star Ricky Schroder that isn’t worth watching or linking, but he berates a calm Costco employee for refusing to let him into the store without a mask, despite the new CDC guidelines. Some “freedom” for business owners—and since when is being required to wear a face mask in a grocery store been close to fascism, or functionally close to getting fucked in the ass—non-consensually?

This is another example of the lack of unity in this global crisis that we’ve been living through for nearly 15 months. This isn’t the fault of the people, but the governments of the world, who refused to deliver clear, consistent messages about the situation not only as it developed, but as it went on, and goes on to this day. There’s never been an equivalent of FDR’s “fireside chats,” or even the speech that George W. Bush gave on the night on September 11, 2001 that did do something and still means something even if everything came after was a horrific perversion.

People have become mask partisans. This wasn’t necessary. David Hogg says: "I feel the need to continue wearing my mask outside even though I’m fully vaccinated because the inconvenience of having to wear a mask is more than worth it to have people not think I’m a conservative.” Kathy Griffin says: “Ok, but if I go mask less because I’m fully vaxxed, will people think I’m an anti masker/COVID denier?” This never had to happen. The only reason there are more than a handful of “COVID deniers” is because of our government’s disastrous handling of the crisis itself, but even more so, their clear contempt when it came to the public, and how stupid they considered us.

Or, even worse, maybe they knew we’d pick up on how little they care about masses of people, and their laziness created an insane confusion that dovetailed nicely with the plans of the powerful anywhere, in any time: keep everyone divided. Then you will rule unopposed. That’s not to suggest some grand conspiracy, but merely stating the obvious about the wealthiest people on Earth: they have their bunkers. They know we know. Celebrities post photos of their opulent homes complaining about being “bored in quarantine,” still believing a window into their personal paradise is redeeming and endearing to a public that can’t afford to buy property, or anything really.

The schism between the rich and the poor is heaving open, and those who work in businesses effected by the CDC’s updated guidelines will be more at risk. Has the honor system ever worked? On the other hand, we’re not in March 2020, but to come a year and a half in and still be addressed in such a confusing and inconsistent way from so many organizations and people within the government—Trump was not alone in this—is enormously frustrating. I’m not advocating for anything other than a consistent policy, one way or the other. I’m helpless to “trust the science” as a layman. What am I going to do, join Ricky Schroder among the idiots desperate to throw their masks away and march “bareface” into a grocery store as if I’m braver and freer than everyone else?

From that Reuters article linked above, a comment from our very together, very stable President: “‘If you're fully vaccinated and can take your mask off, you've earned the right to do something that Americans are known for all around the world: greeting others with a smile,’ he said, flashing a brief smile himself.” Good to know President Biden is still capable of facial movements. Whether or not he can handle a crisis, foreign or domestic, remains to be seen. Whenever something flares up—Israel, the coronavirus, mass shootings, police violence—Biden hides. Why? Resume the daily briefings. The selective mask mandate would be one thing if 90 or 95 percent of Americans were vaccinated, but again, when has the honor system ever worked?