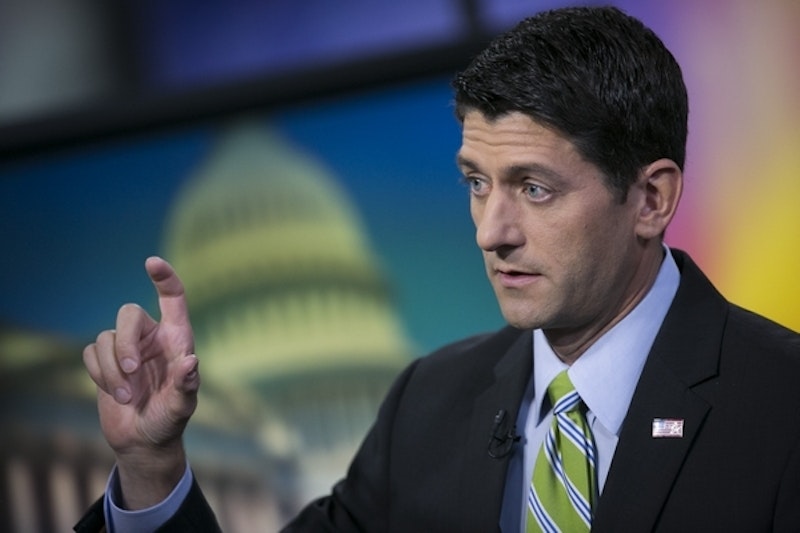 The House Republican Conference is a death trap. Republicans need somebody to fly the thing, and the supply of dumb people got used up with Kevin McCarthy. Now they want somebody smart. Being smart, the pilot they have in mind is looking at what he needs to get that crate over the ridge. For one thing, he figures, passengers can't just lunge for the pilot's eject button.

There we have Paul Ryan and the “move to vacate,” meaning the power of House members to vacate the Speaker's chair of whoever happens to be Speaker. The rule isn't used; it's just there, like an eject button. But a fellow lunged for it this summer, and that added to the misery of John Boehner's life. Ryan, who's lined up to replace Boehner as the Speaker, wants something done about the rule. Not remove it, he says, just make it harder to use. The people who made Boehner miserable want the rule to stay as is.

I sympathize with anyone who distrusts Ryan. My guess is he wants to be Speaker way more than he admits. And maybe, procedurally, there's some good reason the move to vacate should be kept limber and ready, even though it was barely used until Boehner's tormentors came along. But the characters speaking up for the rule seem more interested in Ryan's personal attitude than anything else. They say he's being insolent.

“It’s like interviewing a maid for a job and she says, ‘I don’t clean windows, I don’t do floors, I don’t do beds, these are the hours I’ll work,’” complains Representative Matt Salmon of Arizona, who I guess has hired maids. The pundit Laura Ingraham tweets “EMPEROR RYAN: How many co's wd choose the employee who issued demands abt personal time then said 'take it or leave it.'” Ben Domenech at The Federalist is daintier. He opens by giving Ryan an out for his uppity behavior: “If you don’t want a job—really, really don’t want it—one way to approach the job interview is to act like a Millennial. That is, to make clear you have some very high expectations for what the new employer will do for you. Like, twice as much vacation time, totally flexible telecommuting, setting up a new game room, stocking the right kinds of ethically sourced snacks, and getting rid of the two-century-old functional rules of the House of Representatives as written by Thomas Jefferson himself.”

Hot Air reports that Jefferson thought the move to vacate would be good for the Senate, not the House. Also, it's just one rule, not “rules.” Finally, Ryan is not a maid or a kid out of college. He's not even a job applicant. He may want that job, but he didn't ask for it. The party has got itself in a jam and it needs him. Idiots have been led on and allowed to run wild, and now enough of them are in the halls of Congress to foul up Washington's gears. Ryan is needed to cope with the consequences of their behavior. But the idiots, being idiots, factor their behavior out when considering the situation. That makes them hard to reason with. Approach them pro to pro, and they spin themselves a story. They wonder aloud about this uppity slacker who affronts them with demands for family time and uprooted House institutions. They wonder how he could face his potential employer this way.

I'll note that the House faction we're discussing comes to 40 people at most, and that their current agenda is for rule changes that will affect everyone in the House for, in theory, the indefinite future. Forty people who want to change everybody else's rules. They wonder about Paul Ryan and where he gets off. Their thinking is pure conservative base, which means it isn't thinking. It's a reflex: if they don't get what they want, someone else is being a real jag-off. They figure they're in charge and reasonable, and that any evidence to the contrary is just a sign that some other person is acting in a way that's laughable and out of place. For instance, Ryan and his imaginary artisanal Tibetan trail mix.

The GOP has cultivated that attitude for several decades now, both in its leadership and in its base. Now a faction turns the attitude against the whole, and the Party is learning what the rest of us have learned: that somebody who hallucinates can be tough to beat in a negotiation. When last heard from, Ryan no longer said the move to vacate had to be fixed before he took the job. Now he says it can be something they talk about later on. The pilot figures maybe he'd just better hang easy about that eject button. Yeah, happy landings.