Hillary's Happy Self Emerges at the Benghazi Hearing

Seems authentic to me. 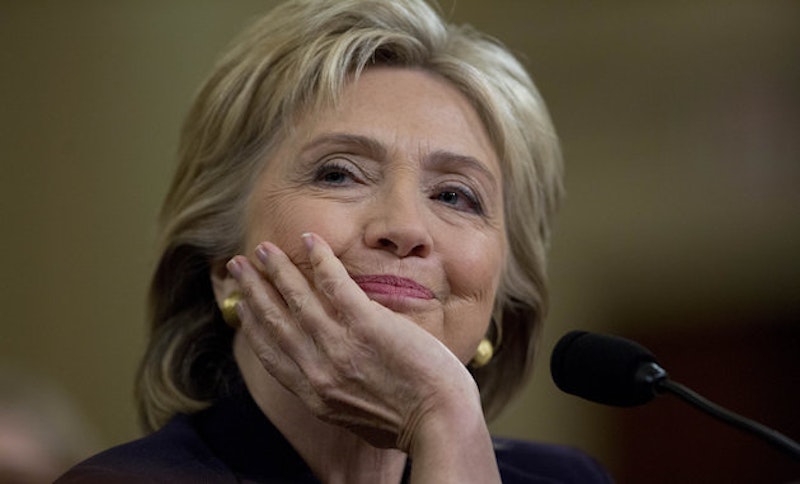 Hillary smiling, one hears, is something awful: she's a creature trying to pass. I guess to experience this sight you have to catch Hillary on the Today show or at the dedication of a women's health center. Mainly I've seen her in the debate and now the Benghazi hearing, and I’d say Hillary Clinton is more at ease than most other politicians. More of her typical on-camera minute is spent just doing what people do, as opposed to remembering bits of business and expert advice about where to position the chin.

In fact Hillary's debate-and-testimony face is beautifully expressive. It floods with spontaneous feeling. Off on the right side of the screen, Hillary and her face made up a dynamic non-verbal cheering section as two congressmen, off in their box on the left, hammered at each other about Sidney Blumenthal's testimony. The Democrat was getting the better of it, and Hillary was delighted. I got the feeling that she didn't just like the outcome, she appreciated the sight of how it happened, how the moment rolled out. Her face changed along with the action, like a filmstrip of expressions heavy on vindication, amusement and scorn.

For Hillary the phrase “go time” means something. Combat, preferably under hot lights, millions of people in the audience—for her that's comfortable, better than comfortable. Her system doesn't jam or take on strain; it moves on up to the level it likes to be. In between bouts, Hillary may complain about the dopes who drag her into their hassles. But without them she'd have trouble functioning.

Another bright idea. John Boehner thought Jeb Bush should run for president, Kevin McCarthy should be Speaker of the House, and Trey Gowdy should be in charge of the Benghazi select committee. This is known as having a deep bench, since few people combine Gowdy's experience as a prosecutor with his resemblance to a cartoon figure warning GE customers of 1957 to keep their new freezer defrosted. Gowdy's silver hair goes up higher than it should, his cheekbones come too close to each other, his color palette is unusual for humans—I could swear his face was mainly a brushed silver with blue highlights, and that his lips were a dull mauve, like painted nipples—and, to finish, his mouth, eyes and chin are puckish little crescents neatly inscribed together.

Gowdy's main line of attack: if Hillary got emails from Sidney Blumenthal, that meant she wasn't paying enough attention to other topics, such as compound security at Benghazi. The reasoning: something went wrong, this is something, therefore this is what went wrong. Blumenthal works nicely as a something, since his emails talk about Libya and he's a hated loudmouth and Clinton sycophant. “And I'll tell you what, if you think you've heard about Sidney Blumenthal so far, wait until the next round,” Gowdy announced to his Democratic colleagues. The Washington hanger-on's name came up 82 times in a hearing about events at a compound in southern Libya.

But anything could be slapped into the “this is something” box. Gowdy noted grimly that Hillary had received an email about the Libyan people's need for emergency supplies. “...medicine, gasoline, diesel and milk,” Gowdy read off. “Do you know how long it took you to respond to that email?” he asked. Not long, Hillary said. Gowdy dropped his bomb. “Yeah,” he said. “Four minutes.” Then, heavy: “My question, and I think it's a fair one, is the Libyan people had their needs responded to directly by you in four minutes. And there is no record of our security folks ever even making it to your inbox.” Email about avoiding a humanitarian disaster after a civil war should never take precedence over your ambassador's personal message about embassy security needs, even if the ambassador never sent you any such message.

The Benghazi hearing was supposed to make Hillary Clinton look bad. Instead they're selling me on her.