It’s a secret that everybody knows. 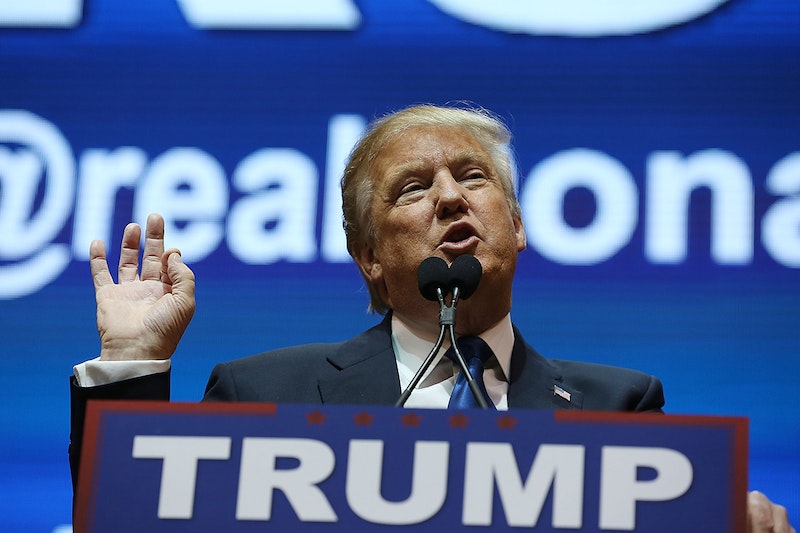 Donald Trump encompasses opposites. He’s rich but he talks like Queens. He’s famous for his hat but also his hair. He thinks waterboarding is fine, but he’s noisy about not letting people die for lack of health insurance. (The other Republican candidates aren’t so vocal regarding that point.) Here’s another pair-off: Trump is going to make the world knuckle under, but he caves openly and without shame. This last item hasn’t received much attention, maybe because it doesn’t feel that odd. It really should, considering, but it doesn’t.

Consider the fuss over “pussy.” A woman at a Trump rally in New Hampshire, puzzling over Ted Cruz’s lack of zest for waterboarding, called out that the Senator was a pussy. This delighted Trump, who gave great play to her remark. But now the race heads for South Carolina, and testing indicates that voters there don’t like cursing on the campaign trail. Perhaps as a result, Trump has changed gears. A few days ago he told a Louisiana crowd that from now he wouldn’t play blue. “I won’t use foul language. I’m just not going to do it,” he said. “I’m not going to do it... Even if it’s not a bad word, if it’s a little bit off, they kill me. So I won’t do it. I’ll never do it again, actually.”

Understood normally, Trump was saying that the heat was too much and he had to watch his mouth. So much for Mr. Indomitable and his war on (so to speak) pussyfooting. But nobody cares. He had to do no walking back or explaining, and he’s still up there in the polls. The crowd in Baton Rouge gave him some good-natured razzing, but that was it.

Another example received even less attention. A couple of months ago, Trump said maybe he wouldn’t take part in CNN’s next Republican debate unless the channel coughed up $5 million for veterans. CNN was not responsive and Trump forgot the idea. “When you’re leading in the polls, I think it’s too big of a risk to not do the debate,” Trump told a reporter. “I don’t think I have the kind of leverage I’d like to have in a deal and I don’t want to take the chance of hurting my campaign. So I’ll do the debate.” Under human rules, that means he caved in. CNN won, he lost. He got outplayed. But human rules and Trump rules aren’t the same.

Humans understand this fact without thinking about it all that much. Opponents didn’t jump on the climbdown and neither did pundits, with one exception that I know of. This was Kevin Drum, a blogger so rational and well-adjusted that he’s doomed to be out of step with our dizzy planet. “There you have it, ladies and gentlemen: your master negotiator at work,” Drum scoffed. “The guy who’d get Mexico to pay for a wall. The guy who’d squeeze Iran like a grape.” Cutting words, but who cares?

Trump talks like a tough guy. He’s the same size as a tough guy. He made a few billion and he didn’t do it by lining up some ones and zeroes. In theory, at least, he did it by getting people to do what he wanted. Cool heads know that a lot of the money came from licensing and The Apprentice. They also know that Trump inherited a ton and that he’d be richer if he’d skipped business and stuck his windfall in a decent index fund. But the cool heads are as blind as anybody when it comes to the Trump cave-ins. Why? Apparently this is the blind spot that 99 percent of the population—pro and con—share regarding the Trump phenomenon. When we figure out what’s up with that, maybe we can figure out how to get rid of him.