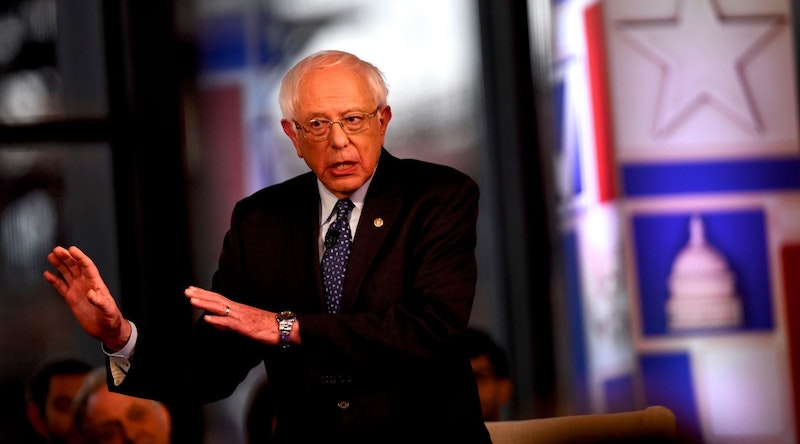 Bernie Sanders looks less likely to win the presidency than he has at any point since Trump's victory in 2016.

After running a strong campaign against Hillary Clinton in 2016, Sen. Sanders, a self-proclaimed socialist, seemed like the likely heir apparent. The Senate moved him into a leadership role. Other candidates like Kamala Harris and Cory Booker rushed to co-sign his signature policy ideas like Medicare For All. He held town halls that received widespread and enthusiastic press coverage. His followers, with reason, claimed he was the candidate to beat in 2020.

He doesn't look like that anymore. Joe Biden, a centrist establishment figure has surged to 38 percent in polls. Sanders struggles at 20 points behind, at around 16 percent. While Sanders has stalled out, Elizabeth Warren is slowly making up ground by proposing the kind of exciting, sweeping progressive plans that Sanders had made his trademark, but with a level of detail that Sanders never managed.

Sanders is still in second place, and he retains a strong base of support among progressives. He's certainly not out of the race. But he's nowhere near where he hoped he’d be. The Democratic base is obviously more swayed by Biden than last cycle's insurgent; Sanders hasn't managed to position himself as the logical successor. And he's having trouble establishing himself as the main challenger. Despite enormous name recognition, he hasn't run away from Warren, Harris, or even the previously unknown South Bend Indiana mayor Pete Buttigieg. Sanders had a head start, but Biden lapped him, and nobody else has fallen back. That's not a good sign.

Some argue that Sanders doomed himself by refusing to actually become a Democrat—he still runs for election in Vermont as an independent, even though he caucuses with Democrats. Sanders has also in the past been critical of Barack Obama, who is hugely popular with Democrats. Sanders' anti-Democratic stance works well with people on the left who dislike the Democratic establishment. But most people who vote in a Democratic primary are in fact Democrats. Alienating them isn't smart.

It's possible this has hurt Sanders at the margins. But I don't think it's the central problem. Nuances of messaging rarely make or break a candidate.

Sanders hasn't made any single mistake. He's just not as strong a contender as he looked like the first time he ran. After 2016, his fans could reasonably hope that some 40 percent of the Democratic base who voted for him were committed to him personally. As it turns out, though, much of his support last cycle was from people who wanted an alternative to Clinton.

But Clinton isn't in the race this year, and there are many alternatives to the establishment candidate. Lots of people (like me) who voted Sanders last time around are turning this year to other options. People who are looking for progressive policies can vote for Warren. Young voters, an important part of Sanders' coalition last time, can vote for a range of candidates who are actually closer to their own age, like Beto O’Rourke, Buttigieg, Harris, or Booker. Moreover, Sanders is a white guy at a time when many in the Democratic party are (reasonably, in my view) invested in making  leadership less white and less male.

There's nothing wrong with Sanders. It's just becoming increasingly clear that, for the 2020 primary electorate, there isn't anything overwhelmingly right with him either.