A Prolonged Assault on Public Health

Trump's suggested that if the World Trade Center had asbestos, the towers wouldn’t have burned on 9/11. 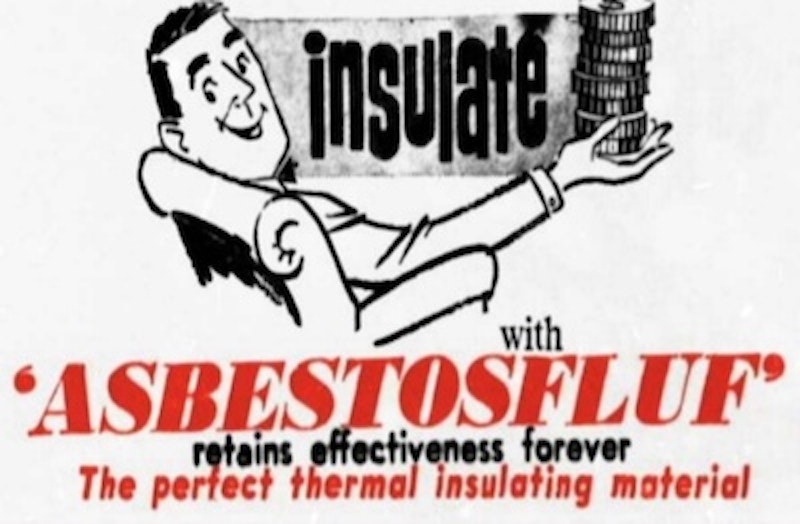 A couple of years ago, Bill Maher's closing monologue about the changing governing philosophy of the Republican Party under Donald Trump questioned policy shifts that no one appeared to ask for. One example was weakening the bans on lead bullets and another on chlopyrifos, a pesticide known to give children brain damage. But one question stood out: "Why bring back asbestos? Yeah, asbestos... Who the fuck is still in the corner of big asbestos in 2017?" And it's a question that has gnawed at me ever since.

Over Maher's shoulder was a City Lab article detailing the pending policies of then-new EPA Administrator Scott Pruitt. Since its creation during the Nixon administration, after the Cuyahoga River repeatedly caught fire because it was so polluted, the general view has been that the purpose of the Environmental Protection Agency was to protect the environment, particularly from industrial abuse. Pruitt took the view that his job was to protect industry from losing money on costly environmental regulations. During his previous tenure as Oklahoma attorney general, Pruitt dissolved the office's Environmental Protection Unit, and became notorious for repeatedly suing the EPA, usually in conjunction with oil, gas, or coal companies. During Pruitt's Senate confirmation hearing, he described evidence of asbestos as a known carcinogen to be inconclusive.

The conclusion that there’s a correlation between exposure to asbestos and respiratory problems has been the scientific consensus since the 1970s, most commonly mesothelioma, a cancer of the protective lining of the internal organs, and asbestosis, a chronic lung inflammation. The World Health Organization, the Centers for Disease Control, and the Occupational Safety and Health Administration have all said that there’s no such thing as a safe level of asbestos exposure. Even dating back to the first century, the Roman writer Pliny the Elder observed that those weaving asbestos fibers were prone to poor respiratory health.

Throughout much of human history, the fireproof nature of asbestos has been regarded as something of a miracle. Comprised of six different silicate minerals, asbestos was woven into cloth and usually used by royalty and popes for tablecloths and robes. When candlelight was the only indoor lighting, this seemed like a safe way to live. As life became more industrialized, asbestos was more commonly used for building insulation. It was also used for car insulation in the U.S. until the 1990s. In the 1980s, the European Union, Japan, New Zealand, and Australia all moved to ban its use, and clear it from public buildings and homes.

In the U.S., limits on the use of asbestos have been enacted, but no outright ban. In 1989, the EPA issued the Asbestos Ban and Phase Out Rule. During the building boom of the 1950s through the 1970s, asbestos use was at an all time high, not only as a building material, but also some brands of cigarettes used it in their filters. One of the buildings to go up during this period was New York City's Gulf and Western Building in 1970. The building was later bought by General Electric, and in 1994, a deal was struck for Trump to redevelop the office building into a hotel and residences, turning it into Trump International Hotel and Tower.

In his 1997 book, The Art of the Comeback, Trump gives some detail on the renovation process, and spends three paragraphs sharing his thoughts on asbestos. He sounds Medieval in his view of asbestos as "the greatest fire-proofing material ever used... It is also 100 percent safe, once applied. But early on, asbestos got a bad rap because of the fact that miners who were digging for asbestos for many years would often develop asbestosis, and therefore people thought that asbestos was not safe. I'm not saying it's the greatest material to work with. I'm only saying it's the safest material in terms of fire. A huge and concerted effort was made to have asbestos removed from buildings, causing tremendous dislocation and destruction and creating a new problem: asbestos floating in the air.

"I believe that the movement against asbestos was led by the mob, because it was often mob-related companies that would do the asbestos removal. Great pressure was put on politicians, and as usual, the politicians relented. Millions of truckloads of this incredible fireproofing material were to special 'dump sites...' In any event, because of this stupid law, we faced the huge task of removing the asbestos from every inch of steel in the building."

In the fuller context of the book, I can see where Trump is bitter about the expense of removing asbestos from a 44-story building. However, it has probably saved Trump and GE the long-term litigation costs. The first wave of American asbestos-related lawsuits began in the 1920s, and by 2010, were estimated to total $200 million. I couldn’t find evidence to support Trump's claim that asbestos eradication had anything to do with organized crime. What he does get somewhat correct is that asbestos removal and disposal are highly regulated and specialized professions licensed by the EPA. And yes, a structure cleared of asbestos does need to be completely vacated, because of the toxic dust particles, until the site passes air quality tests.

Trump has also been quoted as suggesting that if the World Trade Center had asbestos, the towers wouldn’t have burned on 9/11. This isn't true. When the towers collapsed, they released upwards of 1000 tons of asbestos dust into the air. It’s among the toxicants and carcinogens believed to be inhaled by those who worked at the site after the collapse, leading to high rates of cancer and respiratory illnesses.

The last significant producer of chrysotile, the main component in asbestos, is in the serpentinite rocks of Russia's Ural Mountains. On its own, chrysotile is still a carcinogen, but that doesn't stop the Russian mining industry from trying to rebrand it as a safe alternative to asbestos. In response to the EPA's weakened regulations, a publicity stunt was staged, where a few pallets of asbestos were stamped with a seal that included Trump's face, encircled by the following: "Approved by Donald Trump, 45th president of the United States." Trump's cynical view of asbestos regulation is also welcome, given that the Russians believe their asbestos producers are the victims of a conspiracy driven by greedy lawyers. It's worth noting that residents of the Ural Mountains have some of Russia's highest cancer rates, but because Russian health authorities don't distinguish mesothelioma from other cancers, there’s little understanding of asbestos exposure precluding the illness.

The Toxic Substances Control Act of 1976, which allows the EPA to record and monitor specific chemicals in circulation, was updated by Congress in 2016, and tasked the EPA with writing the new framework. This work was begun under the Obama administration, but was almost entirely rewritten and finalized by the Trump administration. The significant changes are to how the new rules define terms like "exposure" and "conditions of use." Scientific American quotes an MIT director: "A shift has been made under the present administration. They have decided not to go very far in looking at all the uses a chemical might have. They’re basically subverting the purpose of the act, which is protection."

Pruitt resigned from his post at the EPA in the summer of 2018, amid a cloud of corruption. His successor, Andrew Wheeling, a former coal industry lobbyist, appears poised to continue on the same path of protecting industry from environmentalists. A Harvard study, published in 2018, concluded that the Trump administration's proposals would be a prolonged assault on public health, noting, "Not having to comply with environmental rules will increase corporate profits, but not worker bank accounts."