Remember that one man’s disaster is another’s pork. 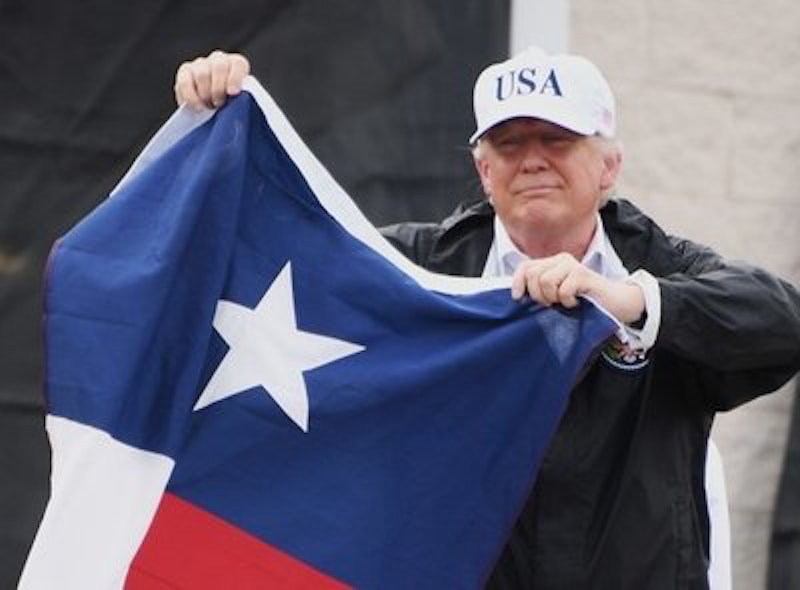 The real menacing flood is not in Texas. That eventually, mercifully, will run off and dry out. The offending deluge is in Washington with the return of Congress this week, and President Trump up to his neck in alligators in the very swamp he promised to drain.

Trump must realize he’s in trouble, and his manic behavior shows it. In a new Pew poll, only 16 percent of voters say they approve the way Trump is comporting himself in office. In the Gallup tracking poll, Trump’s approval rating is down to 35 percent. In Trump’s personal favorite, the Rasmussen poll, which tilts right-wing, Trump’s approval numbers are down to 42 percent. And in a fresh poll from Fox News, the Trump-friendly network, 56 percent of respondents say that Trump is tearing the country apart and 55 percent disapprove of his time in office.

Thus disarmed, Trump is turning on the people he needs to accomplish his goals, whatever they are on any given day. Trump has belittled the Republican leadership of Congress, humiliated his staff, denounced the Republican Party as part of the Washington swamp, gone on the attack against Democrats in Congress, assaulted Congress for its do-nothing record, and is apparently relying on his base to ramrod his agenda—if there is one—through Congress. For Trump’s illumination, his base doesn’t have a vote in Congress, and what’s more, his base came up three million votes short in the election. That’s hardly a mandate, but more of a reproving finger-wag.

Here’s what’s on the dance card as Congress returns from its summer break: Right up front, Trump and Congress must figure how to come up with the funds it’ll cost to rehabilitate the flood-damaged areas of Texas and Louisiana, by some estimates $100 billion. They must accomplish this against the tight Sept. 30 deadline of raising the debt ceiling to prevent a government default, which no doubt will provide the funding source for flood relief. The House Freedom Caucus (formerly Tea Partiers) opposes tying flood relief to debt ceiling legislation because it blunts their determination to reduce the debt. (Trump has personally pledged $1 million toward flood relief, but the White House has not revealed the source of the money.)

Another piece of the financial package is the promised tax reform. But in his Missouri speech, Trump abandoned all pretense of tax reform and has settled simply for tax cuts—for the rich, the GOP’s primal scream. Fact checkers found nine false or misleading statements in the speech. Add to the mix the constant irritant of dealing with North Korea, whose response to every Trump threat is another missile launch and a thumb to the nose. Trump will not abandon his obsession will walling off Mexico, even at the (hidden) expense of American taxpayers. He has ordered prototypes of a border barrier.

And here’s a brief list of the assaults on our sensibilities that Trump committed during the August recess that trail him back to business in Washington: Trump pardoned Arizona Sheriff Joe Arpaio, who was found guilty of contempt of court, even before Arpaio was sentenced. And so eager was Trump to suck up to his base that he issued the pardon over the objections of Arizona’s two senators, John McCain and Jeff Flake, both critics of Trump. Arpaio defied a court order to stop detaining Hispanics on their appearance alone as suspected illegal immigrants. Trump resumed issuing surplus military vehicles to local police departments, a practice that was popular 30 years ago but was halted by President Obama when officials in urban areas objected to their threatening presence.

Trump issued an executive order banning transgender individuals from serving in the military. His military advisers initially ignored the order, then halted it until a study is completed. Top officials in the Trump Administration defied the president by speaking out publicly against his statements on the riots in Charlottesville and on diplomacy with North Korea. Ivanka Trump, an unpaid White House staffer, who has championed women’s rights, instigated a rollback of an Obama Administration order designed to close the gender pay gap.

And the Trump link to Moscow tightened with the release of an email from a Trump associate directly to the Kremlin asking for Vladimir Putin’s intervention in the proposed construction of a Trump Tower in Moscow. Adding to Trump’s growing list of miseries, Special Counsel Robert Mueller now has a draft letter Trump prepared prior to firing FBI Director James Comey. The letter, according to reports, contradicts public White House explanations for firing Comey and contributes to the investigation into possible obstruction of justice. That’s a heavy load of baggage to haul for an already unpopular president. Is it any wonder, then, that Republican members of Congress are distancing themselves from the mercurial president of their own Party.

Natural disasters make lots of people rich. And when the line begins to form, remember that one man’s disaster is another’s pork. It’ll be interesting to watch, amid the human tragedy and deprivation and the physical devastation from Hurricane Harvey, as the anti-government, anti-immigrant, anti-black, entrepreneurs assemble at the public trough to elbow each other for a share in the billions of rebuilding dollars.

In 2012, when Hurricane Sandy wiped out parts of New Jersey and New York, President Obama pushed for a $60 billion aid package. Both Texas Senators—Ted Cruz and John Cornyn—opposed the reconstruction money as did most of the Texas congressional delegation as well as the Trump Administration’s budget director, Mick Mulvaney, then a congressman from South Carolina. A three-month delay in approving the package exposed a bitter rift between northeastern establishment Republicans and southern anti-government conservatives.

Many of those left displaced by Harvey are Hispanics and African Americans, including some who were relocated from Louisiana after being uprooted by Hurricane Katrina. Three times recently federal courts have rebuffed Texas for its blatant attempts to disenfranchise blacks with stringent voting requirements. And the Texas legislature adjourned abruptly recently rather than act on Republican Gov. Greg Abbott’s renewed attempt to outlaw transgender use of public bathrooms, locker rooms and showers. An interesting sidebar is whether flood relief legislation will require recipient states to correspond to federal anti-discrimination laws and election guidelines. Texas has also led the charge to end DACA, the Deferred Action for Childhood Arrivals program from the Obama era that grants permanent residency to children who were brought to America by undocumented parents.

The real flood is originating within Trump’s febrile mind. Through all of the tragedy and commotion of the past two weeks, Trump has clung stubbornly to his mendacious habits. Trump turned his trip to Texas to assess the death and destruction into more of a campaign-themed rally: “What a crowd, what a turnout,” he intoned to a gathering nowhere near the rained-out ruins. And back in Washington, the White House nullified Trump’s statement that he witnessed the devastation in Texas “firsthand.” White House press secretary Sarah Huckabee Sanders, in effect, acknowledged the falsehood after reporters traveling with the President, and Texas reporters covering the visit, disputed the claim. Trump later returned for another look and a close-up photo-op.

The irony of the Trump presidency is that the only barrier between the tyranny Trump would impose, and the freedoms that we enjoy, are the federal courts which he appoints but are bound to uphold the law. His proposals have been rejected many more times than approved.