Should Liberals Cheer Palin on in 2016?

I’d rather she simply disappear. 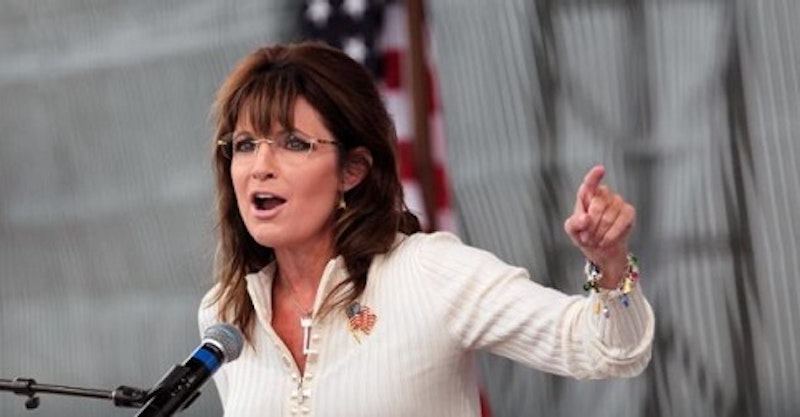 Sarah Palin may enter the 2016 Presidential election? Liberals rejoice! Or at least, many of the liberals I know on social media seemed pleased at the prospect. Palin, my leftist friends hoped, would pull the GOP to the right and make the presidential campaign a chaotic mess. That has to be good for Hillary Clinton, right?

I'm a lefty Marxist socialist sort too, and I'm all for Republicans crashing and burning in the 2016 election, the more spectacular the better. But I also wish John McCain hadn't embarrassed himself by elevating Palin to national prominence. Her candidacy means nothing good for liberals, and certainly nothing good for the country.

First, there's no reason to think carnival right-wing candidates like Palin, Ben Carson or Donald Trump hurt Republican presidential chances in any way. Last election cycle, the Republican primary was filled with joke candidates chasing publicity and Fox news exposure: Herman Cain, Michele Bachmann and Newt Gingrich. Did they affect the election outcome? Not as far as anyone can tell. Mitt Romney did about as well as you'd expect a generic Republican candidate in the general election given the economy. He had to tack a bit right in the primaries, but that didn't stop him moving towards the center again in the general.

And if Gingrich had no effect on the election outcome, you can be sure Sarah Palin won't. As Chris Cillizza writes at The Washington Post, running for president is hard. It requires a huge investment of time and money. Palin has made no such investment. "There is NO indication that Palin is ‘seriously’ doing anything that would indicate any real interest in the race aside, of course, from doing that easiest thing of all: Just saying it," Cillizza reports. Her supporters and detractors may be excited at the chance to cheer or hoot a Palin presidential run, but Palin herself just wants the cheers and hoots.

So liberal hopes that Palin will somehow damage the GOP are preposterously, optimistic. But, if she's not actually going to hurt Republicans, and if her campaign is utterly inconsequential, can't we liberals at least make fun of her? Palin and other right-wing minnows like Donald Trump are jokes. If conservatives want to parody themselves in a public fashion, why shouldn't we laugh at them?

The problem is that while turning itself into a joke doesn't hurt the GOP in elections, it has other bad effects. Palin, Trump, and their ilk aren't politicians; they're entertaining demagogues, spewing right-wing talking points to get a rise out of left and right alike. Such "entertainment" can be bad even outside a political context (see Milo Yiannopoulos whipping up targeted harassment for fun and profit.) But when it becomes enmeshed in Republican Party politics, it can have disastrous results.

Politicians are always entertainers to some extent, but ideally they balance the desire to grandstand with the need to actually govern. In the Republican Party, the incentives are out of whack. So, you get Ted Cruz shutting down the government, at a cost of $24 billion, in the name of good right-wing Fox News theater. No policy goals were advanced; no actual policy goals were even really at stake. The whole point was to provide entertainment for people who like cheering on conservative purity against the marauding liberals.

Palin's never going to be in a position to spend $24 billion dollars to fund her photo-op, thankfully. But the prevalence of Fox vanity candidates like her in the Republican field is a sign of serious problems in the GOP. Those problems won't prevent them from getting elected. But they can create chaos and needless destructiveness once they are in power. Palin, and what she represents, isn’t funny. I don't want to laugh at her. I want her to go away.