Sheldon Silver Was Hardly the Only State Legislative Baron

Some of these guys have run their chambers with an iron fist since the Reagan era. 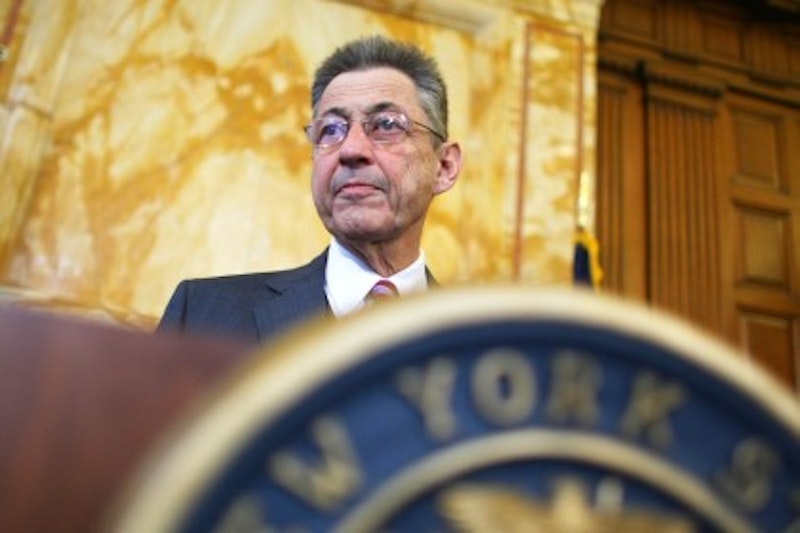 The Sheldon Silver era is officially over. The New York Assembly speaker, in that post for nearly 21 years, is stepping down as he fights federal corruption charges.

Silver, 70, represents the Lower East Side of Manhattan. First elected in 1976, Silver is accused of abusing his office to obtain $4 million in payoffs. “Federal prosecutors said he disguised his windfall by portraying it as legitimate income he earned working part time, ostensibly as a personal injury lawyer,” The New York Times reported.

New York is among 35 states without term limits. In some cases lawmakers stay on for decades. Silver is hardly the only state legislative leader to wield power for so long. Consider Michael Madigan, speaker of the Illinois House for all but two years since 1983. As Chicago Magazine noted recently, “The Democrat has ruled the statehouse for decades. At age 71, he’s as powerful as ever.”

With ironclad control, Madigan seems to have given into temptation. In the summer of 2013, for instance, critics argued Madigan specifically sought a pay raise for an employee of Chicago area’s commuter rail service, Metra, who has been a generous contributor to the speaker’s campaigns. It’s among numerous allegations of corruption leveled against the speaker—each of which he has denied and fought off successfully.

It’s a similar story in Maryland, where State Senate President Mike Miller has ruled the joint since January 1987. The Eastern Shore Democrat was first elected to the legislature 16 years earlier. Miller is also believed to be the longest-serving state Senate president in the nation.

Miller has had his own ethics scrapes. More than 10 years ago, the FBI inquired about Miller’s campaign fundraising, suspecting the lawmaker of violating federal laws in arranging more than $200,000 in donations from a local racetrack owner. But the federal authorities dropped their probe in late 2004.

It’s easy to see why state legislative leaders may be prone to (alleged) corruption. These guys—and so far it’s all men on the corruption front—are often able to control their chambers in a hierarchical way not available to many other political leaders. And they can do their work relatively quietly. Speakers and Senate president may be powerful, but they receive comparatively little media attention. Most people can name their state’s governor, but few people know who the speaker is.

And they often rule the roost in out-of-the-way state capitals. Springfield, Illinois, isn’t exactly a cosmopolitan haven. Annapolis, Md., is more prominent if only because Maryland’s a smaller state.