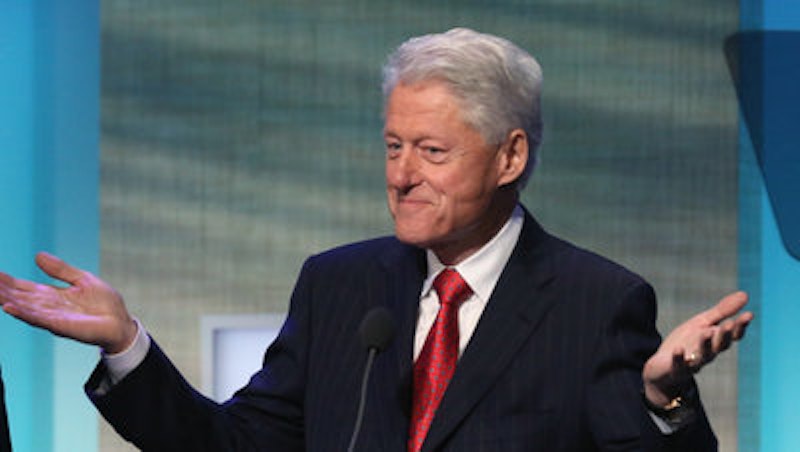 Bill Clinton tried pushing around Martin Scorsese. The director was going to make a documentary about Clinton for HBO, but “people close to Mr. Clinton sought to approve questions he would be asked in the film, and went so far as to demand final cut, a privilege generally reserved for directors of Mr. Scorsese’s stature.”

That's from The New York Times, which says it got word from unnamed people “briefed on the project.” The documentary was well along, including its centerpiece footage of Bill Clinton emitting benevolence rays during a visit to Africa. But now Scorsese has stopped work on the project, and HBO says wanly, “It’s not happening soon but that doesn’t mean it’s not going to happen.”

Of the above, only the HBO statement is known to be true; yes, HBO did say that. For their part, Scorsese and the movie's producer gave the reporter no comment, and a Clinton aide said by email that the claims were “inaccurate.” But find somebody who believes that aide. Two years ago HBO and Scorsese announced the documentary they would make about this “transcendent figure,” as Scorsese described our ex-president. Now HBO has nothing to put on the air and doesn't really expect to. What happened in between? We don't know of anything that would have made Scorsese change his project from puffball to threat, or anything that would have made Clinton especially jumpy about his reputation.

Maybe Clinton has suffered a medical setback and doesn't want evidence on film; if so, good luck campaigning for his wife. Maybe his wife's people won a behind-the-scenes trench war, and now their candidate wins this extra safeguard. Or maybe Bill Clinton has become used to the great people of the world dropping plums and apples into his hand. He noticed 2016 coming closer and he thought, what the hey, better seal any gaps in Hillary's p.r. protection. Sure, the project was safe or he wouldn't have said yes. But safe isn't as good as safer, and why not get the best? It shouldn't be a big deal. The documentary's producer is a Clinton buddy, a multimillionaire who gets named in paternity suits and has been spotted with Bill and what Vanity Fair termed a “ravishing entourage.” He and Bill are in the same wolf pack, and the movie's director thinks Clinton is transcendent and towering. So let them know that, for peace of mind, Clinton would like some due precautions to be taken. Turns out to be a problem.

Clinton can't believe it. Look at the HBO-Scorsese-Clinton project. Out of those names, which is key? You can have movies that aren't made by HBO or directed by Martin Scorsese. You cannot have a Bill Clinton documentary without Bill Clinton. The project exists because he exists, because he matters so much that the world wants to be near him. What's this about a “privilege generally reserved for directors of Mr. Scorsese’s stature”? Clinton loves movie folk and all, but he knows they love him more and he figures they should. Yes, Clinton had to work with Congress, and he had to become a lot more careful about grabbing females, but these limits were impressed on him by the U.S. Constitution and a series of lawsuits. Behind this first cut business is just the notion that one being in the scale of wonderfulness, Martin Scorsese, deserves deference from a being who ranks several clouds higher. Bill Clinton can't take it seriously.