Does Mike Huckabee Have a Willie Horton Problem?

Pardons as Arkansas governor are easy fodder for GOP rivals. 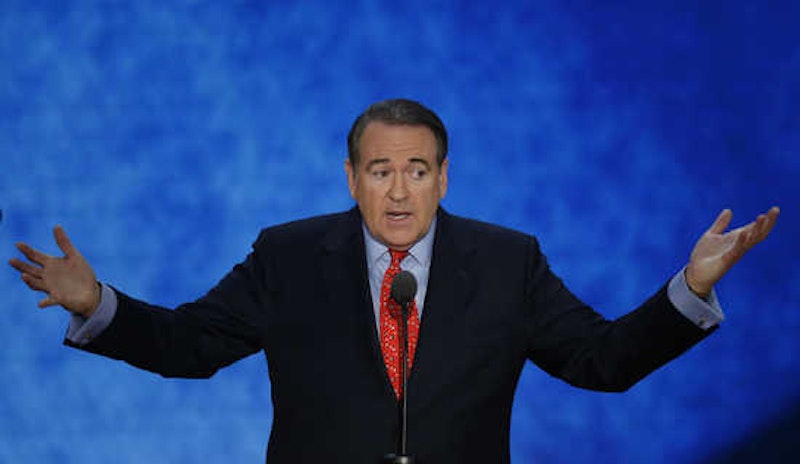 As Mike Huckabee moves toward a 2016 presidential bid, rival Republican candidates won’t have to dig hard for opposition research. They’re likely to start with the former Arkansas governor’s pardons while in office, particularly Maurice Clemmons’, a gunman suspected in the November 2009 execution murders of four police officers in Washington State. As CBS News reported at the time, “Back in 2000, the then-Arkansas governor commuted Clemmons' 108-year sentence for theft and other charges. Clemmons had already served 11 years in jail at the time; Huckabee said he made the decision in part because Clemmons was just 16 when he was sentenced. He also suggested the sentence was excessive and that a white teenager would not have received such a long jail term.”

But the story didn’t end happily. Clemmons moved to Washington State. And in November 2009 he went on a crime spree in Seattle, casually walking into a coffee shop early one morning shooting four police officers while they were eating breakfast. He fired at point blank range, killing all four instantly. Clemmons himself was later killed in a police shootout.

Huckabee’s potential 2016 Republican opponents will no doubt revive the gruesome facts of the case. Whether or not Huckabee will actually run isn’t publicly known yet, but he’s recently stepped down from his lucrative FOX News weekend show, suggesting he was eyeing a second presidential bid.

Huckabee was arguably the Republican runner-up in the 2008 presidential primaries to nominee John McCain. Huckabee stunned the political world by winning the Iowa caucuses, with heavy support from Christian conservatives. But his campaign funding dried up ahead of the New Hampshire primary, hobbling his chances. Still, he blocked out other GOP would-be nominees like Mitt Romney, raising his public profile, which helped him land the FOX gig.

Still, Huckabee has to know about how politically perilous prison furloughs can be. In his 1988 presidential bid, Gov. Michael Dukakis (D-MA) got tripped up badly by his weekend furlough of criminal Willie Horton. Horton went to Maryland, where he brutally attacked an innocent young couple in their home.

The campaign of Republican presidential nominee George H.W. Bush made a big deal out of it, running a swath of bruising “weak on crime” television ads knocking Dukakis over furloughs. A conservative group independent of the then-vice president’s White House campaign organization ran an even tougher spot, showing the face of the African-American criminal.

Dukakis responded sheepishly and slowly, thinking voters would see through the ploy. Instead the episode cemented him in many voters’ minds as a “wimp,” a label once thrown at Bush.

Huckabee is no such shrinking violet. In the past he’s tried to explain away the Clemmons pardon that led to the killing of four cops. If he runs for president, expect to hear a lot more explaining.