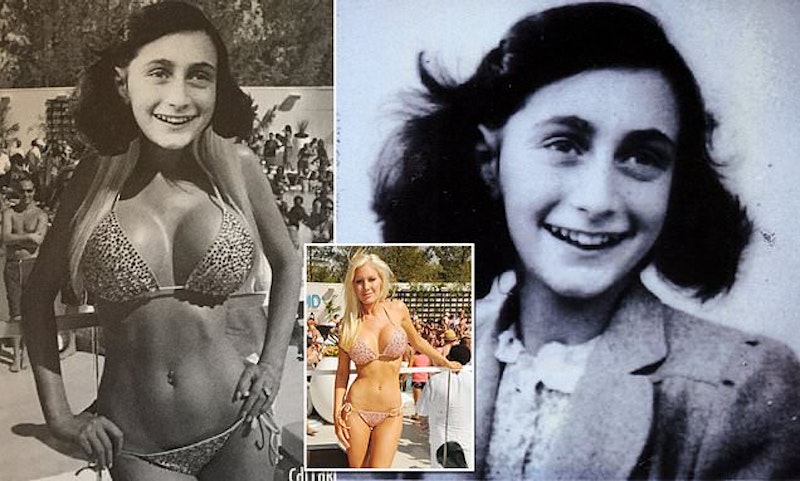 The online petition to force the Harvard Lampoon to apologize and submit to other punitive actions for its latest affront to right-thinking individuals refers to the legendary publication as a comedy magazine, with quotation marks around comedy. The implication's that the magazine's brand of nihilistic, “fuck you” humor's no longer appropriate in the post-comedy era, where adding value to the conversation surrounding diversity, equity, privilege, and other preoccupations of the social justice brigade are now considered a vital part of the humorist’s job.

The satirical, nearly 150-year-old publication’s done Nazi humor for decades (e.g. a child's letter to Heinrich Himmler: “How do you get all those people in your oven? We can hardly get a roast pork in ours"), but the recent photoshopping of Anne Frank's head onto a photo of a bikini model's left some verklempt and inclined to neuter it. The magazine was quickly pulled from distribution points around campus. Inside the same issue you'll also see humor involving suicide, 9/11, and school shootings.

Had it been a recent start-up magazine, Harvard Lampoon would’ve already fallen , but it's a powerful organization with a broad network of famous people. Its continued existence on the Harvard campus is starting to resemble an oasis where water's airlifted in over hostile terrain. If it were up to Harvard junior, Danu Mudannayake, the planes would be intercepted, green would soon fade to brown, and the students would be safe from its toxicity.

Mudannayake started a petition against the Lampoon that more than 800 people have signed, and has also spearheaded the successful campaign to get Ronald S. Sullivan Jr. fired from his faculty dean position because he was on Harvey Weinstein's defense team, which allegedly interfered with his duty to create a “healthy ecology” on campus. The college junior's on a roll, but free speech isn't one of her top concerns.

A video Mudannayake made to highlight her organized street protest against Sullivan shows a person who's promoting herself much more than her cause. For 20 self-absorbed minutes, during which the camera almost never leaves her face, she rambles on about her new iPhone, what she has to do for class, and her invitation to Seattle to participate in an interview with Bill Gates that she couldn't attend because she was too worn out to travel to Seattle . At one point, the student appears post-shower, clad in a towel, telling her audience that she's just done the right thing because everyone has to be clean. In another portion of the video, she sticks her tongue out at the camera.

In the video, Mudannayake says almost nothing about the protest beyond what time it’ll be held. Noting about the complexity of the issue, or why people should be rallying behind her. You're left with the impression of a narcissist who's convinced that the mundane aspects of her life are so extraordinary that she's compelled to share them instead of explaining why a respected professor needs to lose one of his jobs. It's hard to fathom how that video could motivate even one person to attend her protest.

Last month, Mudannayake was involved in a dining hall confrontation with Winthrop House senior tutor Carl L. Miller that ended up with both of them filing police reports. According to Mudannayake, she approached Miller after he took photos and videos of her as she dined with a friend. Miller and his wife, who are black, both wrote in emails that they were photographing their young child while having dinner when Mudannayake began harassing and provoking him. They stated in writing that Mudannayake threatened their child.

One Harvard student who took offense to the Anne Frank image posted a Google Doc in which she said that Holocaust jokes and sexualizing a young girl’s body were “never okay.” Jewish comedian Mel Brooks made a comic movie about Hitler and the Nazis, The Producers, over 50 years ago. And Frank's been dead an awfully long time for the sexualization to matter much, plus the photo in question was not depicting a girl. Certainly the joke was in poor taste, as intended, but it was funny, because it did something unimaginable with the image of a revered icon.

Why was the magazine forced to apologize for this one? Because it's anti-Semitic? What anti-Semitic trope was it spreading? Does it incite violence against Jews? No. And since when does the Left care much about anti-Semitism unless a right-winger shoots up a mosque, which they can blame on Trump. But the opportunist sees a chance to use alleged anti-Semitism as a pretext to go after the enemy.

Danu Mudannayake's demanding apologies from four people and insisting they have individual meetings with Harvard Hillel and other cultural groups to learn how they’ve damaged “student well-being.” She's also demanding apologies for prior hate speech incidents, and that there be no smoking, illegal drugs, or alcohol in the magazine's meetings with prospective staff. Terrorists used guns against Charlie Hebdo; Mudannayake's using her petition.

People considering signing the Lampoon petition should take a look at Mudannayake's self-indulgent video and check out what two members in good standing of the Harvard faculty are accusing her of. They might consider the fact that it's not the job of a humor magazine to look out for the “well-being” of every single Harvard student.