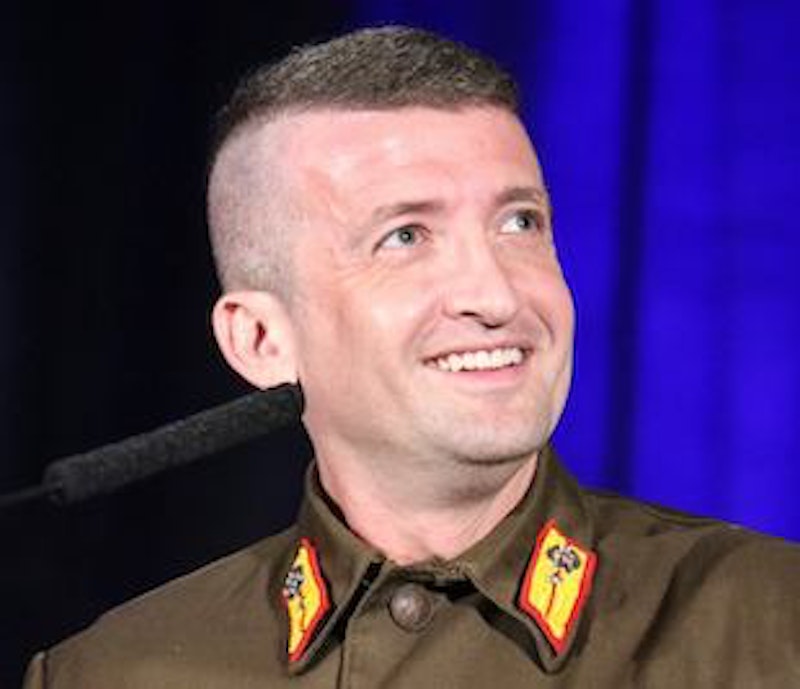 It takes courage these days even to talk about the likes of anti-immigration activists or the alt-right in neutral, reportorial tones.

Witness the left’s hatred of New York Times opinions editor Bari Weiss, a liberal, after she wrote about a far-right activist without a sufficient tone of condemnation. NPR devoted a recent show to describing their own internal angst after running an earlier piece about an anti-feminist that may have made him seem too human, offering within the newer piece a proposed less-empathic revision of the original story.

So Michael Malice, already notorious for Twitter-trolling numerous celebrities and broaching fringe political topics on his podcasts, risks reaping the whirlwind with his fairly sympathetic book examining The New Right, as he calls them (the “alt-right,” loosely speaking, being merely the racist subset of the broader New Right coalition, though the alt-right proper is prominent in the final few chapters of the book, serving partly as a cautionary “You’ve gone too far” alert).

We should be grateful to him. Someone has to explain this stuff, and he‘s been embedded with them for a few years now.

I should confess not only that I’ve known Malice for a couple decades (having met him a few weeks before 9/11, the city slowly getting over the trauma since then) but that I know a few of the far-right types. I know people across the political spectrum after years of living in New York City, working in media, hosting live debates, and being a libertarian—all of which used to mean you’d be considered “eclectic” but for the past few years basically means you’re doomed to be considered guilty-by-association with one faction or other by all other factions. In-between-tribes is a thankless place to be lately, unless you hit exactly the right “intersectional” combo to please the audience you seek.

I used Sander Hicks as a debater at one event I organized back when he was still sort of a communist and Richard Spencer at another before he was known mainly for being a racist. That doesn’t mean I agree with either of them, but try telling people that before they launch the Twitter storm these days. You may have only seconds to act.

And that environment of hair-trigger outrage and rapidly-fissioning tribalism is the rich soil in which grew the current New Right (not to be confused with the “New Right” of the early Buckley era or the “New Right” of the 1980s evangelical/neoconservative alliance, though the term has been used for those phenomena as well). Its participants disagree on ideal policies—many have given up even hoping for any useful legislation to be passed, which may be wise—but are united in their hatred of the common enemy, the left.

They love to troll, goading their foes with messages just confusing or deliberately offensive enough to evoke an irrational, time-wasting reply. But for some of the New Right, at least, small rival tribes such as specific left-wing activist groups (or for that matter, ethnic and immigrant groups) aren’t the real targets. The real target, like a referee who has so bungled the game that players from multiple teams finally decide to jump him, is the moderate-liberal or center-left establishment (think Clintonites, left-leaning yet respectable universities, and major TV networks) that fancies itself the ultimate keeper of the rules of polite discourse, acceptable political opinion, tech platform codes of conduct, and the so-called Narrative about what matters now in mainstream culture.

The New Right calls that whole superstructure of interlocking and mutually-reinforcing social institutions “the Cathedral,” explains Malice, and like the Catholic Church 1000 years ago, it pretends to be universal—and even pretends to be open-minded about it, while destroying the occasional heretic whose utterances threaten to show how parochial the keepers of the mainstream really are.

A thousand years ago, the heretic got burned at the stake and now he probably just gets banned from social media, but the fanaticism from which real censorship laws are made is plainly bubbling there among the New Right’s enemies. Far from living peacefully with such would-be totalitarians (as many milquetoasts flying the banner of “centrism” or “bipartisanship” have long sought to do), the New Right aims to rile them up so much they let their masks slip, revealing highly partisan, arrogant, angry faces. You thought you were just dealing with an actor or a kindly professor? Behold the monster within.

The New Right’s cast of characters as profiled in this book will strike many readers as ghoulish and worthy of having their own faces hidden, though: provocateurs Ann Coulter, Jared Taylor, Christopher Cantwell, Milo, Pat Buchanan, and Jim Goad are all here—not to mention Vice founder turned literal right-wing streetfighter Gavin McInnes, whose face Malice describes at length as aging and less than beautiful (ribbing is mandatory among the Proud Boys and their pals).

More so than Bari Weiss’ infamous piece, Malice’s book seems a conscious exercise in “normalization,” but he admits as much. We ought to be able to discuss the ideas herein—and many others—without flipping our lids, even if we conclude they’re wrong. We might even conclude some of them are wrong and others right, and it would be the lowest and most irrational form of tribalism to think that’s too messy a state of mind to be permitted.

With political tribes rapidly multiplying and morphing, the New Right in its current form may not last, but it would be better to learn from it while it does than to keep lumbering ahead, angry fist in the air when the Cathedral gives the cue, pretending there are always exactly two (very mainstream and familiar and safe) sides to every issue, the right one and the wrong one (a.k.a. the liberal one and the conservative one). That static way of thinking—and the Cathedral that loves maintaining and exploiting it—is creepier than almost any monster on the New Right.