Why Won't They Go on Fox?

Any Democrat that skips the network is toast. 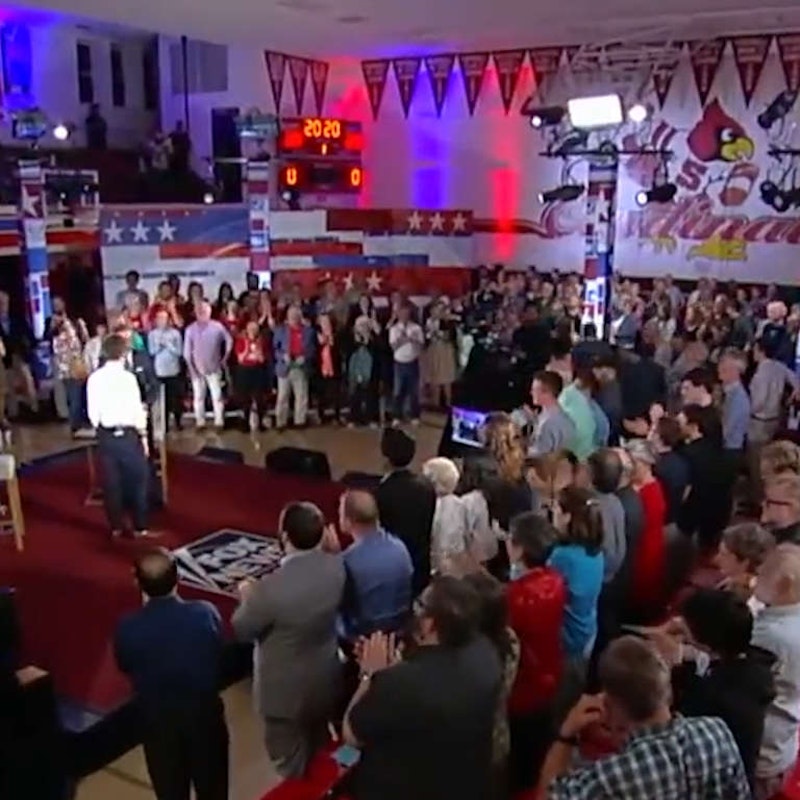 In recent weeks, there's been a lot of discussion among Democrats about appearing on Fox News. Citing a New Yorker article that laid out the network's conflicted, and cushy, relationship with the president, Democratic Party Chairman Tom Perez decided that there would not be any Democratic primary debates on Fox. Elizabeth Warren turned down Fox's offer for a town hall, calling the network a "hate-for-profit racket that gives a megaphone to racists and conspiracists." Because Fox has higher ratings than the rest of cable news, one has to wonder: is this any way to campaign?

This confirms, for many Fox viewers, that Democrats are elitist cowards who fear an open debate. In my view, Fox has a large enough reach to set a political narrative in motion, and the Democrats are fools for not taking advantage of an opportunity to set the narrative themselves in front of Fox's audience. As for Warren, she's also a thorough researcher, and her approach to policy is detail-oriented, but Fox viewers will never allow themselves to learn that if she doesn't show up. Instead, they’ll continue buying the story that Fox has established: that she's an elitist academic snob, a tax-and-spend socialist who looks down on them, and that her claims of Native American ancestry were always a canard for self-advancement. Not so different from Crooked Hillary Clinton.

Depicting Warren as a Hillary-in-Waiting (but with even more socialism!) has been an effective strategy for Republicans. According to a 2017 article by Rebecca Traister, a super-PAC called Massachusetts First was created for the sole purpose of targeting Warren's 2018 re-election bid, and had been boosted by a $150,000 donation from hedge fund billionaire and Breitbart financial backer Robert Mercer. A frequent line of attack is that despite Warren's populist rhetoric, especially on college costs, she’s a millionaire who had a fat salary during her time as a Harvard professor. One can only conclude, after a barrage of this shilling, that Warren is just another Clintonesque, self-serving political hack.

Meanwhile, South Bend, Indiana mayor Pete Buttigieg is a remarkably tenacious candidate. In contrast to Warren, his recent appearance on a Fox town hall showed him winning over the studio audience. He was direct in engaging with questions from the audience, and also proved he was capable of thinking on his feet. When the inevitable questions about student loans came up, he revealed that he and his husband are, together, currently carrying a six-figure load. Buttigieg also didn't waste an opportunity to criticize Fox hosts Tucker Carlson and Laura Ingraham. The moment that really won over the audience was when he was asked about Trump's tweets, and Buttigieg simply replied, "I don't care."

In fairness to Warren, her town hall on CNN also showed a similarly engaging and knowledgeable candidate. Her history as a working mother has given her insight into the resources lacking for professional women. She also shared a story from her Oklahoma childhood that could connect with a red state audience. When her father survived a heart attack, he wasn't able to work, so her 50-year-old mother got her first job outside the home to pay the mortgage. Warren notes that in 2019, her mother getting that same minimum wage job could not save their home. My takeaway was that Warren is a pragmatic, policy-oriented problem-solver. But by having two town halls on CNN and none at Fox, she gives the impression that she's only comfortable preaching to the converted. It doesn't help that CNN is one of Trump's favorite punching bags, which only makes the partisanship more vivid.

As I look at the 2020 Democratic campaign, I'm mostly disappointed. I think Buttigieg, Beto O'Rourke, Stacey Abrams, and Andrew Gillum are all promising, but that their names were ever floated as presidential contenders exposes a desperation on the part of Democrats. I think that comes from Republican activity in state level elections, which has created a better farm system. Democrats have a bad habit of complacency in the face of success. Despite Democrats winning the House of Representatives in 2018, Republicans still hold the majority of state governorships and legislatures. And I don't see enough discussion around the prospect winning back the Senate, let alone finding someone in Kentucky to take on Mitch McConnell.

The reality is that Republicans are playing a different game, and Trumpism has actually been a liberating force to openly operate in ways that were once more clandestine by ignorance. Pundits and strategists like Hugh Hewitt, Karl Rove, and Grover Norquist have loudly wished for a permanent Republican majority. It‘s as liberal commentator Thomas Frank wrote in 2008: "The most cherished dream of conservative Washington is that liberalism can somehow be defeated, finally and irreversibly, in the way that armies are beaten and pests are exterminated. Electoral victories by Republicans are just part of the story. The larger vision is of a future in which liberalism is physically barred from the control room—of an 'end of history' in which taxes and onerous regulation will never again be allowed to threaten the fortunes that private individuals make for themselves."