See Them Do Silly Things After the GOP Debate

The post-game has its moments. 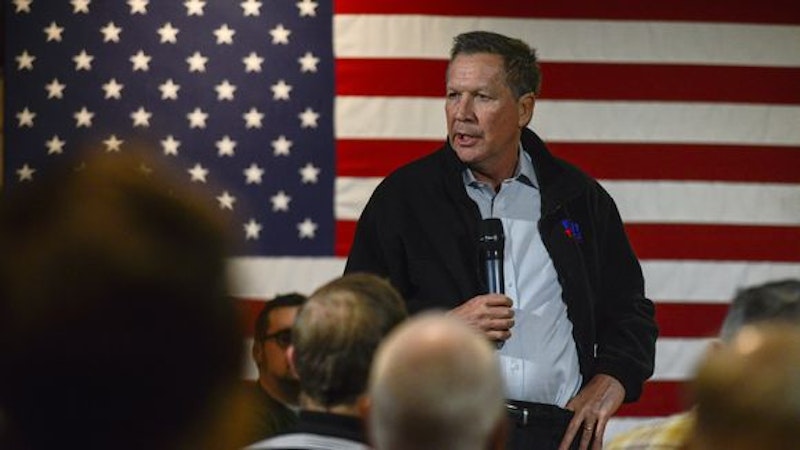 Ben Carson sits with a microphone on his shirt front. He and Neil Cavuto are parked atop what looks like a dais; ties and hairdos are milling below. This is backstage after the debate, in Spin Alley (as Cavuto reminds us). Cavuto debriefs Carson, and Carson allows how he can talk about all that stuff—foreign policy—more than any of them, anybody up there. But he doesn’t get time, he says.

When his interview is done, Carson stands. He turns; he’s a graceful man. A young tech in shirt sleeves leans into view. The tech places a hand on Carson’s chest, and Carson pauses, and the tech flips a cord, possibly of Carson’s microphone. Then the tech leans out of view. I suppose Carson might have tripped.

Kasich’s joke. This is during a discussion of the vice presidency. Does John Kasich want to be vice president? Kasich says no. “I’m running for president and I’m getting somewhere, Neil,” he says.

“Well, I don’t need the attitude, I’m just throwing it out,” says Cavuto. He rags Kasich a bit more about attitude. Then they talk about something else. But a little later, with Kasich going away, Cavuto says, “Boy, with the attitude,” or words to that effect.

Kasich used to be paid on-air talent at Fox, so maybe Cavuto finds little distance between the two of them. Now Kasich is governor of Ohio and wants people to think he’ll be president. But there are so many small-scale presidents running about backstage. A media name like Cavuto can forget what the chaps aspire to, the extra dimension they allegedly carry about. The media name might even stop paying attention.

Kasich hadn’t been going for attitude. He was trying for a move found among baby boom Republicans, the Hey, look at this when what’s right in front of you finally breaks through and now you see it. It’s a move suited to dorm wise guys, a vibe that I associate with the foot soldiers and field commanders of the Reagan-Bush GOP. Not wise guys at fancy Northeast dorms but in humble Midwestern dorms, often paid for by the state. The carpet is orange, a bong sits near a turntable, and somebody is blowing away the liberal orthodoxy about Food Stamps, sandbagging it with some Hey, look at this. Get down to how life works—Ayn Rand, Free to Choose by Milton Friedman—and the facts pop through what you’re told, just shred it.

Wise guys can go for that, and Kasich wanted to communicate with his fellow cut-through-the-guffers, the Republican voters. He would do it in their language: Hey, look at this. But no, a failed moment. Maybe the language is dead and Reagan-era wise guys talk to the dust. Maybe Kasich was never so good at it. I remember him emerging from a budget summit in the mid-90s and advancing down a long corridor before coming within range of the reporter, at which point he tried a “Yes!” and a fist pump. It didn’t come off.

This time Kasich was saying, Hey, look at this big fact, namely that he’s “getting somewhere” in running for president. But that isn’t a big fact; it’s medium at best, and gray and lopsided and with a pitted, dull texture. A candidate says he’s getting somewhere. That’s not a fact to point to. Cavuto doesn’t even understand what Kasich is going for, can’t be bothered to read his play. “Attitude,” Cavuto says. John Kasich speaks to the dust.

End of the Show. “I told you,” the pundit says. “I’m going to sit and reflect on that one.” He’s nose, beard and stomach, and he’s heaped in the chair next to Cavuto. “You don’t know,” Cavuto says. “I don’t know.” “Why the hell are you here?” Cavuto says quickly. The place has emptied out. Any backs and elbows seen in the background are going somewhere else. There are the walls and the floor and these two guys. The show is done and it’s late.