But Paul’s not dead. 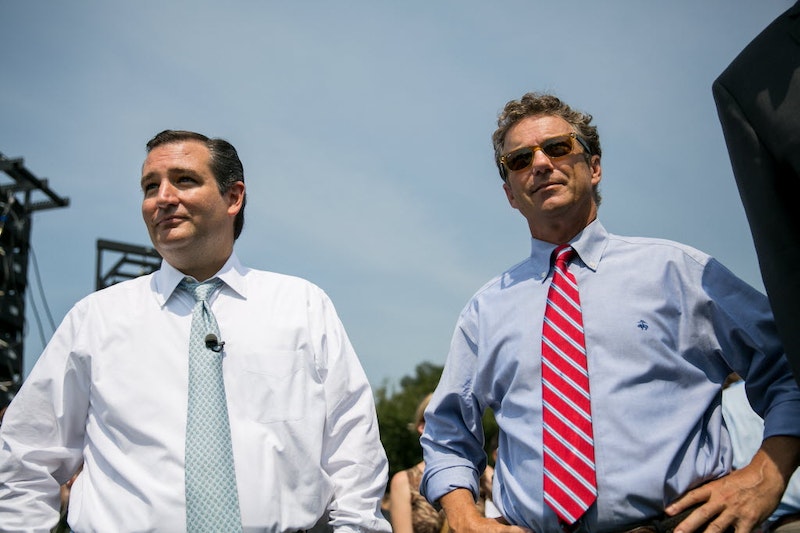 I know. I know he sort of sounds like a crazy 1980s televangelist, complete with a condemnation of “New York values,” but Ted Cruz, as everyone always says, is also a fine debater—and an Ivy League lawyer, not just some bumpkin. He now appears to be the best, perhaps the sole, hope of stopping Donald Trump from getting the Republican nomination. At times, he’s even funnier than Trump. That makes me happy.

David Brooks, on the other hand, called the sometimes angry-sounding Cruz guilty of “pagan brutalism.” Brooks himself prefers the more hawkish Rubio (who denounced Cruz, Rand Paul, and Bernie Sanders in one breath in the debate) and calls Rubio’s attitude more “hopeful.” Nuts. Rubio is pretty plainly more eager to entangle us in expensive battles abroad—and at home, considering his enthusiasm for the drug war—than Cruz is. To bland establishment types like Brooks, though, that sounds familiar, relaxing, responsible—grown up.

The problem may be that Brooks was born in Canada, to which he’s said he’ll return if Trump wins (so there’d be a silver lining even with that terrifying electoral outcome). Canada-born Cruz notwithstanding, Canada generally breeds moderates, who may not be as nice and safe as they at first appear. Even libertarians with ties to Canada seem to end up doing pro-establishment things like condemning Barry Goldwater as an extremist or praising mainstream liberalism. Yet it’s the “respectable” political center they and Brooks emulate that does big, bland, awful things such as conduct wars as if they’re a matter of sleepy routine.

There will be no winning move in November, of course, but the so-called extremists, noisy though they may seem, may yield fewer dead bodies and more freedom than the so-called moderates.